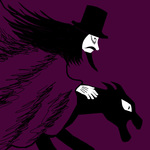 In Blades of Iron Roses: An Anime-Inspired Fantasy Knight RP → 3 mos ago Forum: Casual Roleplay
Sir Jerel Ban
How had he missed it? The thought rankled. For somebody who prided his eyesight he had missed a lot recently, and this time it could have cost a life.

Jerel barged through the stunned crowd behind Fleuri, only barking apologies and never looking back.

It could have cost a life. He was not so old yet. It was as though he’d fallen from favour. Why did he not deserve it? He must have been doing something wrong. Idleness, doubt. Murder.

It could have cost a life.

But it did not. Even through the adrenaline Jerel felt the relief explode through his trembling limbs; the Princess and Captain were alive. He was surprised to find his bow in hand and an arrow knocked. The string slackened as he relaxed.

A Nem. Not even disguised. He should have seen it.

So why didn’t he?

The others seemed to have the situation under control, or at least one assassin restrained. Could there be more? He didn’t see any, but apparently that meant little. He swore an oath under his breath, some rather colorful language about magic.

Hungry for redemption, Jerel swung gaze over the room, eating the details and picking over each person, and between them, never staying still. Even though he knew he’d find nothing.
In Blades of Iron Roses: An Anime-Inspired Fantasy Knight RP → 4 mos ago Forum: Casual Roleplay
Sir Jerel Ban
The change was sudden and unsettling to watch; it threw the mind of balance in the same way as those who wove illusions.

Jerel’s arm slumped from Fleuri. Faith. That’d what he had to maintain, above all else, faith in the others. He thought back to his rose, his offer to Mayon, dropped from a tower, silent, unheard. Why was it so hard?

He frowned at Fleuri’s words, then thought better of it. The fellow knight was right.

Jerel’s eyes danced to the disturbance, a drunken knight it seemed, but then away again. There was no danger to the princess there, nothing mortal. Jerel scanned the crowd for any sign, the barest hint, and came up wanting.

He was beginning to doubt.

“I am, but, I don’t know Fleuri... They’d need a vantage, somewhere high, or to be so close to the princess that they wouldn’t need a bow. And then a route of escape, a window or the gardens, perhaps.”

Jerel wracked his mind, trying to figure the best spot whilst surveying the room discreetly (which was near impossible, but thankfully Jerel was not a focal point). Seeing where the crowds were thickest, where they offered cover and where they hindered, the ceilings, the walls, every piece of furniture, the routes available to flee.

However, in the the end, he shrugged, and near spat, “it’s useless. Once you factor in magic they could come from anywhere.

@Crimson Paladin
In Blades of Iron Roses: An Anime-Inspired Fantasy Knight RP → 4 mos ago Forum: Casual Roleplay
Sir Jerel Ban
Jerel nodded along. He did not balk at her irritation; he was not that stupid.

“I did not wish to presume, Tyaethe, I never doubted your standing,” his words were made from measured tones as he tried to sound earnest and not sycophantic, "Phoran Cal is an interesting figure; there’s so much written about him. That’s the trouble. I’ve never bothered searching any deeper, it’s not of great interest to me, but during this ball it struck me that there’d be no source quite so trusted as you, and I’d be a fool to…”

Over Tyaethe’s head he saw Fleuri approaching, tension and haste splinters in the once smooth grain of his composure. That alone was enough to put Jerel on edge.

He shared a portent.

It might have sounded crazy, had it not come from another knight, and Fleuri at that. There was trust. Jerel believed Fleuri had seen a disappearing girl, and the cake was indeed gone, that much Jerel could see as certain. Exactly what that meant, Jerel did not know, but to disregard the warning seemed sheer lunacy. He spared only a brief glance, searching for something amiss as his mind raced to process, trying to pick out anything immediate from the crowds.

People were watching them. For an instant there was a flash of panic. There were so many. But of course; a knight had just strode through them all, some were bound to pick up on that openly. Others were likely more subtle.

Jerel clapped an arm around Fleuri’s shoulder and laughed, using this as a chance to manoeuvre his body and close the circle. The other knight didn’t reek of alcohol, another assurance.

“It may be an idea to look less concerned,” Jerel said with those same hushed tones, grinning broadly for whoever might be watching, “Unless you alert someone you shouldn’t.”

It had only taken a handful of seconds, but hopefully it would be enough to remove most of the curious gazes.

“What do you think?” He said to Tyaethe. Her authority here was absolute, and he tried to hide the urgency he felt for it.

Watch the crowds. That was the warning. Best heed it. He tried to do it discreetly, which meant that he was limited in what he could see.

It didn’t help. Smiles that might once have been cordial were now chiselled sharp by suspicion, malice-tipped and knowing. All movement held danger.

In a place where all were pretending how could you spot the imposter?

The sigh had suckerpunched Jerel. He wanted to explain, but how could he? She was a Paladin and notoriously blunt. Questions of faith were best kept for musty cloisters and mustier priests.

Let her think I’m just a coward, it’ll save on derision.

And a hypocrite, complaining about the vexious court and then dancing to its tune with questions between lines.

“Children have precious little useful to say,” he sighed and ran a hand through his hair, his beard charms clattering, “But neither do most people here.” There was an irony there that made Jerel smile.

“I suppose I’m jumping a ghosts; not every noble is Phoran Cal," he paused, as if thinking over a question. He wasn't. He'd formed in not long into the night, spurned on by Velbrance. It was one of the reasons he'd hoped to speak to Tyaethe, just not so soon, so sober, "Did you ever meet him before he rebelled?”

@Raineh Daze
In Blades of Iron Roses: An Anime-Inspired Fantasy Knight RP → 4 mos ago Forum: Casual Roleplay
Sir Jerel Ban
Meeting the Paladin’s eyes was a mistake. There was no chance to have hid the surprise that flashed across his face.

His heart thumped. Of all the members of the Order, Tyaethe intimidated him most. An ironic fact, but that made no difference when she stared through you.

Can she tell, I wonder?

“What makes you think I am not enjoying this? I am surrounded by ravens most days. Vultures are a rare treat.”

For a moment, he remained expressionless. Then he sighed, casting his gaze slowly across one side of the room as he tried to collect his thoughts. Blood still pounded his veins.

“The knowledge that something is finite is rarely as comforting as it should be, and leads to fear instead of savour. I suspect you speak truth, that I should make the most of this honour. Yet when I look around, when I speak with these people, none seem genuine; they barely seem real. It’s all a fabrication. A pleasant one, but a lie remains a lie.”

“It disgusts me. And it frightens me, I think.”

“It’s enough to make you want to reach out a shake one, ruffle those vulture feathers, if only to provoke something real.”

The look he gave Tyaethe made the implication clear, “Would that not be dangerous?”
Velbrance.
“You’ve had vastly more experience at this than me, so I speak seeking wisdom.”
What happened?
“Scorning a lord, breaking their illusion, would that not serve to place them against us?”
Is he the sort to hold a grudge?
He shrugged, trying to look only vaguely interested, “Perhaps that’s why I’m not enjoying this surreality. There is too much to think about."

A dollop of frills and spun-sugar elegance, she drifted into this private world. Her feet may never have touched the floor.

So young, so innocent…

How much was an act?

He had kept his lips sealed with a smile at Indrau’s words, and nodded at his departure. Stubborn recklessness seemed a feature of the elder knights. Did they know more than him, or had they just stopped caring?

Tyaethe likely had her reasons.

“Better you than me,” he said as Indrau left.

Which meant he was alone. Yet the disturbance that rippled through the social clusters reassured him; a lone knight would go unnoticed for a few moments more.

He had seen the princess before, had even met her eyes at one function, though she likely would have forgotten his face by now. Either way, he was in no rush to greet her, so was relieved when she was beset by another knight whose name he could not remember.

Instead Jerel did as he was wont to do: he watched. He saw.

A child with clothes too-big tottered to Fleuri. He seemed pleased to humour her. Gerard was involved in a conversation with two ladies, far too intent to disturb. The Knight Serpenta was hard to miss.

For all Jerel saw, he could not find the slighted lord, Velbrance. Perhaps that was best; trying to soothe over such offense was best left for a better time and better people.

Quite by chance, his eyes fell to Tyaethe, unengaged in a section he had been ignoring. The religious contingent seemed able to accuse with just a look.

He had no intention of going over there. Not until he realised the spell the princess had cast with her entrance was slowly unwinding. Several oily and shrew-faced individuals eyed Jerel with a hunger only scavengers knew. He did not want to go, but he did not want to stay exposed.

“A moment of your time, Paladin Radistirin?” Jerel said, standing before her, saluting, careful to keep his eyes on her and not the priests and holy people around. He wouldn’t have admitted it then, the uncertainty, the fear, the guilt that confused his insides, nor confessed its source, even to himself.

“And a measure of your company? You haven’t seemed best pleased this ball. I take it everything is as it should be, or close enough?”