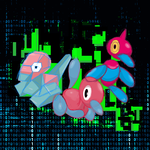 2 mos ago
say sike right now
8 likes
11 mos ago
when I was a kid, I called someone a bitch on neopets and that's honestly the most hardcore I've ever been. I peaked there
9 likes
1 yr ago
Tumblr really isn't that bad unless you intentionally nosedive into drama. I've had one for years and haven't had a single issue. If you're curious, go for it!
10 likes
1 yr ago
@Poohead: When you're halfway through a drawing you think is perfect, then flip it and realize "I have fucked up"
3 likes
2 yrs ago
PSA: Don't talk to your cashier about coronavirus. I can guarantee we're all sick of hearing it from both sides. Just keep your mouth shut and buy your shit.
9 likes

I've gotten into some podcasts in the last few months, one of them being Mr.Creepypasta's story narrations. One of the bigger series he's delved into is The Neverglades by David Farrow - and by god has it hit my muse hard. I've had one idea in mind, perhaps closer to an AU spinoff from after the first volume ends.

- I've only been listening to an unofficial narration, and so far I've only gotten through the first volume (after "Devour"). Looking up the next stories, I see my plot idea goes way in the opposite direction than the canon plot. So think of this as a potential alternate beginning to volume two?

- The characters I'm looking to main are Olivia Marconi and Stephen Hannigan. I will happily balance any other character needed, human or entity, if my partner takes the role of The Inspector.

- No romance. While I'm usually up for some romantic subplot between main characters in my RPs, this one is purely for "found family" trope goodness. Side romance like Olivia/Janine will obviously be present though.

Plot idea (volume one spoilers ahead!):

The Pacific Glade citizens are slowly but surely piecing themselves back together after the earthquake. Months after the rift, after the funeral, the events are chalked up and stored away as yet another quirk in the Glade. Ruth oversees the rebuilding of the home she'd now have to return to without Mark, and The Inspector finds a new partner in Sheriff Marconi. Life continues with countless lives missing. Two of those lives leave glaring holes in Stephen Hannigan - the father he deeply admired, and the little brother he should have joined in death. Pacific Glade is moving on. Why can't he?

There's something about Mark's old partner. Stephen's mother knows it, Olivia knows it, his father knew it. No one could deny he was Mark's child; his perception and instinct drives him to confront The Inspector. Can a boy barely into his adulthood chase the same demons his father did, and come out on the other side? Maybe it's the admiration Inspector has for humanity; maybe it's the strong resemblance to the partner he dearly misses. Whichever it is, Stephen wants a chance to hunt down what killed his father, and Inspector decides to let him join the team.