Despite her ill will toward the fallen robot’s owner, Gabi listened intently as Julian detailed the current situation at hand, the joyful atmosphere of a potential movie night having immediately vanished.

She nodded as their leader spoke, taking her time to process everything he said. While she had been expecting her fair share of action as a part of this team, she did not really expect the training phase of her stay in the penthouse to end so soon. Sure, she had been working out down in the gym, but lifting a few weights had done little to make her part of a crime-fighting team.

Was she even ready?

That question plagued her mind as she rushed back towards her bedroom, causing her to accidentally collide with some of her teammates as she moved. While she was not one to change into a suit of spandex like many of the heroes she admired, she at least needed didn’t want to be running around in slippers and a brightly patterned cardigan. She threw them onto the floor as she stepped inside her sleeping quarters, before immediately grabbing a pair of worn leather boots and perching against the edge of her bed as she moved to pull them on.

Her fingers fumbled as she attempted to tie her laces.

What if she fumbled out there? Sure, she had faced simple thugs before, but that had been different. They weren’t powerful. Just weak men with guns. These guys at the bank however seemed to be the real deal. Actual supervillains. The kind of guys she would see on the occasional news broadcast and would end up fearing for her life from, despite being a whole continent away.

She thought about how scared she had been back then. How much she had looked up to the heroes that would eventually save the day. A smile escaped her lips as newfound confidence began to wash over her. Finishing her laces, she brushed her hair from out of her face, before grabbing the leather handle of her axe tightly and turning towards the window.

What had once been a beautiful spring evening began to change before her eyes, as clouds of grey quickly began to coat the Seattle skyline.

I won’t be getting a post in until the weekend. Kind of stuck on whether to send her to the bank or keep her in the penthouse.

What is everyone else thinking for their characters?

Same, weekend for me too!

Gabi is definitely the type to go after the criminals themselves in this situation
In Young Justice Renegades: A Team Worth Dying For → 6 days ago Forum: Casual Roleplay

In Young Justice Renegades: A Team Worth Dying For → 6 days ago Forum: Casual Roleplay

What do you guys have in mind for the development of your characters? How do you envision their power scaling up, and what does endgame look like for each of you? Do you have any hidden backstories or dark secrets that tie into your development plans (without spoilers)?

While I don't have a clear endgame in mind per se, I do have several ideas and directions I wish to explore with Gabi. From dealing with the expectations that come from being a God's champion, to simply discovering herself and the kind of hero she wants to be. She can be very black and white when it comes to good vs evil, and I want her to discover that sometimes there's more to it than that

Gabi had never been happier to feel the buzz of her phone in her pocket, as she had been as Cece began to narrate the plot of the film they were about to watch. Her attention was immediately gone from the people around her and now fixated on the illuminated screen in her hand. She hadn’t cared much for such devices in the past, however upon receiving this new Lexphone from Julian, she had quickly come to understand the obsession this country had with them. The world was at her fingertips.

A smile flashed across her lips as the name of one of her new favourite parts of her world flashed across her screen. Hana was probably the person Gabi had grown closest to during her time amongst the team at the penthouse, which was surprising given their differences. She may be a bit rough around the edges sometimes, but she certainly made for an interesting teacher for Gabi as she tried to adjust to life in the States. A case in point was the message Hana had just sent her.

[Breaking fxing news! CC dndt kno wht 7 min in Heaven is! I thought she WASNT 1 of the 1s who was born ystrday! 100% prank da bitch about that. 😉😘]
She frowned slightly, after spending a few seconds translating the “Hana-speak”, before realizing that she too also had no idea what these seven minutes in heaven were herself. It didn’t take long for her to fix that though, as her fingers ran across the screen, scouring the phone’s internet browser for an answer – she had no idea technically could be so helpful. What she found shocked her slightly, although she didn’t worry about her lack of experience for long. With how much her life had changed after her parents passing, it was no surprise that she wasn’t seen at many parties back in Guatemala.

The news that the same could apparently be said for Cece, however, stunned her. Given the way she acted sometimes, Gabi assumed the girl had done everything under the sun, even with the conservative views she held. Maybe she had her pegged wrong?

Now she was finally in on the joke with Hana, however, her smile took on a mischievous form as she typed out a response, her eyes peaking up towards the subject of their mockery every so often.

[Your joking?? OMG how?! That girl never stops surprising!!]
She was very impressed with how good she was getting at “Hana-Speak”.

Just as she hit send, however, the shrill sound of panic brought her back into the room.

Snapping her head up, she watched as a gleaming golden disc shot through the window, circling around the room. As It began to slow in its loop, she realized that this wasn’t a disc, but was in fact some kind of small robot. It had two short golden wings and a sleek visor of blue.

A wave of realization hit her as Cece identified it.

“Oh god, not him.” Her moan almost a whisper.

While she may not have known too much about the flying robot itself, she was very aware of its owner. A large obnoxious billboard of Booster Gold advertising a pair of Ray-Ban Gold sunglasses had smiled down upon her crumbling neighborhood in Guatemala for months before she had left. There was not a day that went by that she didn’t wish that she had thrown her axe through those perfect teeth of his while she had the chance.

With the sudden appearance of his faithful companion, Gabi realized that someone may have beat her to it.

“Er.. Hi?” She gave a short wave as she rose to her feet, rearing herself into action. “Has something happened?”
In Young Justice Renegades: A Team Worth Dying For → 7 days ago Forum: Casual Roleplay
Very casual for now, but she'll be getting a suit/maybe mayan armour one day! 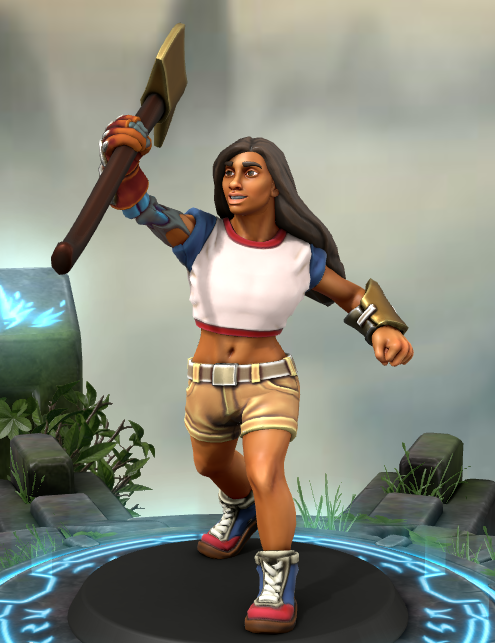 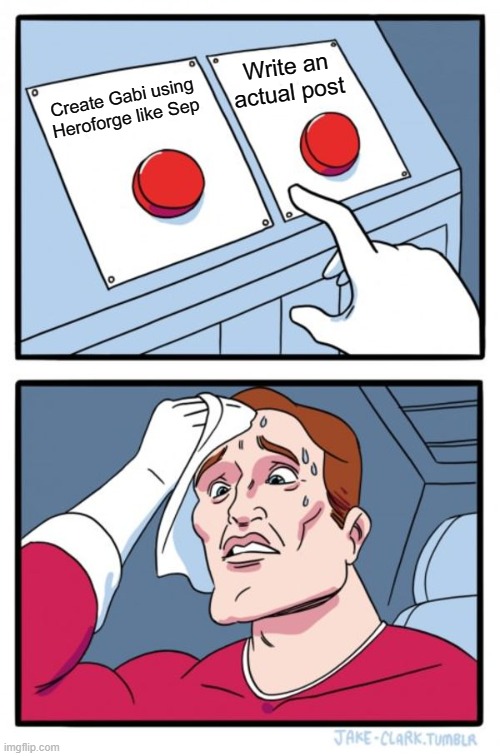