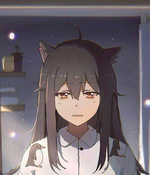 20 hrs ago
Current Happy april fool's!
21 days ago
Remember to manually control your breathing
1 like
8 mos ago
Whenever you have a good dream reality becomes the nightmare.
3 likes
9 mos ago
Putting food in the freezer is like Tetris, but taking them out is like Jenga
10 mos ago
Anxiety is like when video game combat music is playing but you can't find any enemies.
10 likes

In From Oubliette to Oublioth → 5 days ago Forum: Casual Roleplay
Ciel repositioned himself away from the all the fighting, so he's probably away from the center depending on how much time he had to withdraw.
In Lucid's Character Repository → 6 days ago Forum: Character Sheets
WIP for RE/BIRTH (and the rest of the title that I can't remember)
https://www.roleplayerguild.com/topics/181651-re-birth-round-table-i-reincarnated-into-an-otome-game-with-no-true-en/ooc#post-5099233
Full Name: Your name in the world of the game, regardless of whether you reincarnated or not.

Titles: Any titles, be they aristocratic or more in the vein of a personal sobriquet (like a Red Baron type of title if your character is particularly recognized for some reason or another). Those who haven't inherited their family's estate would only be recognized as Lord/Lady. Those who do possess some manner of estate, or who are in the line of succession in the case of princes of the royal family, could hold proper titles - I.E., Duke, Countess, etc.

Nicknames: How do your closest friends and family address you, when all formality is set aside? Skip if you're edgy and nobody loves you, I guess.

Legacy: Whose Successor are you? Phrase like "Successor of Gawain," or "Successor of Mordred," etc. Additionally, describe what kind of bond and relationship you have with the original spirit stuck in your head, and what powers, items, etc. your status as a Successor grants you.

Age: Try to keep ages roughly in the same range as everyone else. Also, it's an Otome Game, so most of the cast will probably be inexplicably hypercompetent teenagers. Because anime.

Gender: Your gender doesn't need to match up with the character you're a Successor to. We've already got a female Arthur and Mordred. Go wild.

Birthplace: Not too big a deal, unless you were born in a city-state outside of Caerleon. If so, describe it a bit - let everyone else know where you've come from.

Appearance: An image is nice, but a short description never hurt anybody. Focus mostly on stuff we can't see - like how they carry themselves, particular tics, or characteristic mannerisms - or on explaining important bits of the things we can - like drawing attention to how their hair color doesn't match their father or mother's, or how they're always wearing gloves and huh, that's pretty weird.

Personality: Keep this pretty brief. Just give the most basic character traits and such, and leave the rest to make itself obvious through RP.

Synopsis: This replaces backstory. Explain not only where your character is coming from, but also where they'd be going on the normal routes of the game, as well as considering some of the questions I listed earlier in the Introduction. Basically, this is here to give the Reincarnators some foreknowledge or awareness of your characters' immediate futures and the decisions you're likely to make. As such, I expect this part to be pretty detailed, even if it's alright for most of the rest to be somewhat barebones.

Previous Life: REINCARNATORS ONLY. Describe who you were, how you knew about the game, how you died, and what your immediate goals are upon realizing you're now in the world of the game.
In From Oubliette to Oublioth → 6 days ago Forum: Casual Roleplay

I mean, you know what would be even scarier? Mages that understand the principles of firearms and physics.

Imagine mages using a long, thin tube with a closed end... and then igniting explosive magic off at the closed end to accelerate enchanted bits at supersonic speed towards their enemies. Or take the principles behind it to accelerate existing spells at the same speed.

Take owo's magic sniper and take it up a notch, and make the entire construct a magically created one...

I believe those are called "artificers"
In From Oubliette to Oublioth → 9 days ago Forum: Casual Roleplay

You two are so old...
Will begin edits for collab soon, just need to wake up a little first.

There we go, hopefully that's more in line and accurate to the situation.

Now we're just waiting for Locke to add his response.

RIP to Ciel literally getting his ass kicked
In From Oubliette to Oublioth → 9 days ago Forum: Casual Roleplay
Nah, I'm happy with the whole "Ciel is outmatched" thing, I never really expected him to win at all - just that I felt the update didn't match the actions I proposed.
In From Oubliette to Oublioth → 9 days ago Forum: Casual Roleplay
Ciel came out of stealth right next to him mid-swing and within dagger range, and wasn't "airborne" as the latest update on the collab describes, so I am not sure what its intent is. Can you clarify the update?
In From Oubliette to Oublioth → 10 days ago Forum: Casual Roleplay
Uhh...Xalt, can you ease up on the collab updates, or drop a warning before it updates? I had just got back from schoolwork and I realistically can't keep up with the pace, much less keep up some level of quality.
In From Oubliette to Oublioth → 11 days ago Forum: Casual Roleplay
When Ciel eavesdropped in the trio's conversation, he had planned to reveal himself, offering himself as a scout for the party. After all, recon and stealth were his daily routines, given that he was a little rusty with combat with it ever since he hung up his gear. But when he rounded the corner, he was nearly knocked aside by the lance wielding mage that sped past him, followed by the noble on the horse and the poor mage (summoner?) who sounded like he was having heart attacks trying to keep up, leaving Ciel coughing from the dust kicked up from the horse.

Ciel watched uneasily as the group carved their way through the streets by brute force, knocking aside bandits and smiting down adventurers into confused blackouts. He could easily catch up, sure - but especially with the spellblade jovially spearing down anyone in their path, it was most likely he would be taken as another badnit before he ever got his name out. Besides, it seemed like they didn't need a scout, if they wanted to just muscle their way through... Or Ciel was making excuses. His stomach pitted a little at the prospect of joining another group. He...he wasn't quite sure if he was ready, despite the ridiculousness of the circumstances.

Nonetheless, they were going in the same direction as he was, and while he was confident he could avoid most confrontations with well timed magic suppressions and invisiblity, he wasn't as sure about the amount of flak flung around. It was a clear path to safety - an opportunity Ciel couln't afford to miss. Ciel sunk back into invisibility, his surroundings warping and buckling momentarily before stretching back over his body, as if tucking a doll under a blanket. As the clearance ahead of him started to crumble back into madness, Ciel took after the group.

It wasn't long before the trail ended with a partially crumbled alleyway, the adjacent building still smoking from a blast nearby. Ciel slowed down to survey the site, spotting the trio he has just followed meeting up with another group. He could pick up faint fragments of the conversation as Ciel stopped to retie his bindle. It had come loose from the run, and if ever he lost the rations inside, he would soon have to be scrounging or even stealing from others. 'Treasure...team up...'

So they were making a bigger coalition for the treasure hunt. It was astounding to hear that people were still lusting for whate er treasure that was supposedly sitting on top of the ruined cathedral, when screams of far off murder was rounding in the vicinity. Ciel's priorities had shifted the moment the panic broke loose, to just survival. What did a few dozen clutches of coin matter if no-one made their way out of there? Ciel emphasized this point with a double knot. He was getting out of here. Probably go back to the farm, at least there no-one but the occasional wolf bothered him. Ciel stretched, yawning as he scanned the view of the palace. It almost seemed like irony to see a serenely old castle when there was so much chaos outside. Ciel liked old buildings, with their stoic watch over ages past. They looked like silent friends, unbetraying and honest with their decay. Nivianis, Ciel's home city, had countless forgotten houses etched into the cragface, and if one was quiet enough, they would hear the brick and stone whisper lonely secrets through the sea breeze.