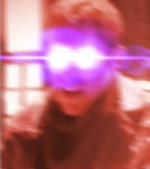 In The Wayfarer's Guild → 13 hrs ago Forum: Casual Roleplay

"Oh, damn it all." Mathias murmured under his breath as he watched Orga outright collapse. The half-orc quickly slid his helmet back on and drew his warhammer and shield, taking up a defensive stance as he looked around the room for intruders. What the hell had happened? Magic? Poison? Considering everyone else in the room seemed to be unharmed, it eliminated several possibilities from the list.

Either way, the fact remained that there was an assassin active on the grounds. By any sane metric, it stood to reason that one attempt was all this killer would get this time, considering the guards were now on high alert. And considering their tracker had just run off...

Mathias turned his helmet's gaze in Petragar and Kiska's direction.

"Sheri was the one with the tracking spell, and we're more likely to get in the way of men that have already drilled together. Petragar, we should go after her. Handler Kiska, keep the client and his guards supported for now." He barked quickly and concisely, falling into old habits. That said, the disgraced knight tore off after Sheri in Vera's direction, his hammer and shield braced.
In Cacophony Concord → 7 days ago Forum: Casual Roleplay
Amulak al Acturus (Stanislaw)
HP:942/1000 MP:1174/1440 SP: 216/216

No paralysis. Great. Wonderful. And...an oni crashing down like a meteor towards both himself and Klein.

"Oh wow oh fuck," Amulak murmured under his breath in both bafflement and amazement for a moment as he beheld the sight, before his survival instincts kicked in and he started fucking legging it away from the impact zone.

That wasn't to say he wasn't going to do anything about the situation, though. A wave of his hand conjured up two Magical Mines where he and Klein had been standing before. Hopefully, even if they didn't finish arming by the time the oni impacted, they'd do so as it recovered from the crash.

Given that he had triple Klein's AGI, Amulak rapidly caught up to and outpaced his companion, giving Klein a jaunty wave as he overshot him.

"Try not to die, yes?" He called out to Klein as he passed. "Looks like you need more luck than me!"

Mathias had been content to simply stand back and listen for some time, allowing the others to get their questions in first. After all, this was never his area of expertise, though he'd raised an eyebrow beneath his helmet as their client mentioned a missing guard. Well. It seemed there was something in this investigation he could contribute to, after all.

"If I may," Mathias finally stepped forward, giving Astor a brief nod. "I'd appreciate it if you did gather your guards up for questioning. Speaking with fighting men is more in my wheelhouse than magical assensing or local politics. Based on their answers, I could at least see where the hole in your security was that allowed for your man Andar to be taken like that."

Though it was good to know that even the guild he'd joined for protection here had something of an uphill battle in terms of legitimacy within its own city walls. That would be something to look into after this job was done, for keeping his own neck safe, if nothing else.

"Oh what the fu-" Was all Amulak managed to get out upon seeing the arm literally rip itself off the oni and fly at him, the hand wrapping around his head as it squeezed for all it was worth.

"Mnnnnnnnnnf!" Amulak screamed in equal parts rage and pain as he attempted to pry it off, failing to do so until Klein managed to do it for him.

After a few moments of catching his breath from all of it that he'd lost in the oni's grip, Amulak managed to right himself up, shaking his head at his savior.

"No fire, entire mage spell list is non-elemental shit. I do what I can." He grunted out, taking a moment to survey the state of the battlefield. Mags covered in worms, Raime taking what potshots he could, and Ames getting double teamed. Great. Just great. "I will help Ames, deal with Mags's shit or Raime's!" Amulak barked towards Klein, already turning in Ames's direction.

One incantation later, and a Mana Boosted Spell Spear plunged down towards the second oni that was busy looming over Ames. Hopefully, it'd give her enough of an opening to do some damage.

This was...irritating. Taken off the job at the last second to be placed on a completely different one? Last minute assignments were never a favorite of his. It didn't help that the new assignment in question didn't play any more to his strengths than the last one did. Probably even less, in fact. Chasing down a thief was still more in his wheelhouse than playing investigator. But, again, he didn't particularly have a choice. So Mathias just sucked it up, said nothing, and followed Suran towards his new group.

A stone dwarf, and two elves. Hm. At least he was familiar enough with dwarves, and one of the elves had sensible enough equipment. The other seemed to be some sort of mage, though, which provided enough of an excuse for him.

"As he said, that's my name." Mathias briefly removed his helmet again to give the rest on his team a look at who they were working with before slamming it back on. "I'll keep the introduction brief. I'm a former knight of Tyrcliff. That's it. Shall we move out? This job isn't waiting forever for us."
In Cacophony Concord → 24 days ago Forum: Casual Roleplay
Amulak al Acturus (Stanislaw)
HP:1000/1000 MP:1440/1440 SP: 216/216

As much as Amulak would have liked to test out his new Nuclei, he'd sort of forgotten to bring it up with the rest of his friends. Considering Weishaupt needed a "willing" host, he would've had to explain the creepy burrowing centipede first and that it needed to go inside them for full effect. An awkward conversation that'd be best put off for when they weren't in the field.

Mags whispered orders to them, but considering the contradictory nature of what she'd said to both him and Raime, he was just going to blow it off as a joke and do his own thing. Five more levels to go until he could start pumping Necromancer. Oh, was he motivated to waste these Oni.

It was in the interest of convenience that he decided to just go apeshit with the AoE spells from the start. Screw it. He had more MP than ever, and enough regen to sustain it for a while.

"Give me XP stupid fucks I want to summon skeletons," Amulak chanted ten words, conjuring a Mana Boosted Arcane Vortex smack dab in the middle of the crowd of five Oni.

Mathias stared down at the pin he was offered for a moment. His badge of identification was a mere pin? It wasn't a proper heraldry, but that life was gone now. There was no point wishing for what he had. His ragged armor didn't particularly have much to hook a pin on, though thankfully the cloak he wore around him did. The half-orc quickly hooked the pin onto the portion of his cloak closest to his collar before glancing back up to listen to the rest of his briefing.

"Chasing a thief, huh?" Mathias grunted, folding his arms. Wonderful. Work he wasn't familiar with. Hell, he'd been hoping to just be sent out to hunt some monsters and call it a day. Tracking down a thinking man? This wasn't something he was trained for at all. Still, if he wanted any measure of security in his life from here on out, he'd have to grit his teeth and get it done.

Thankfully, it seemed someone else here was far more adept at the matter than he was. Mathias turned to Rohaan, nodding briefly.

Yesterday had been a nice, productive day in the cyberworld. Today was looking promising already in an entirely different virtual arena. Stanislaw grinned to himself as the markets closed for the day with his investment portfolio on the rise. Perfect. Even if it just held steady from here on, those would be some juicy dividends paid out this year.

But now with money-making done for the day, he could stop getting that bread and...get that other bread. Whatever. Metaphors were bullshit anyways. Downing the last of his coffee, Stanislaw leaned back in his office chair and put his FDD on, ready for a nice, productive evening of grinding.

Amulak took some time before meeting up with the others to catch up on current events. Hoooo, boy. War, huh? Just by bias for necromancers alone, he was inclined towards the Mora-Sho. But the others might not be so willing to join up with a losing cause. If they wanted to join up at all. Hell, he wasn't quite sure if he wanted to, either. His level was still low, and his gear wasn't great. He'd be nothing but fodder for any high-level players that decided they wanted a piece of the action. Still, best to discuss it with the others first and see where they stood.

Great, Lew was being...Lew again. Amulak simply rolled his eyes as the roleplaying weeb dramatically marched off to do whatever the fuck, and turned to the rest of the group gathered at the plaza.

"Okay, Lew is being very cringe again. So his opinion on what we do not count, yes?" He then turned to Mags, having caught her statement. "Oi, I am fool now? Mags, this hurts deep. You injure my poor heart more than years of Starcraft do." Amulak grinned, clearly not serious.

"In any case, big question: war coming, what we want to do? I like necromancer, so I like Mora-Sho. However, I do not like being low level in PvP because players who have been playing longer than a week will kill us very hard. Likely best for everyone involved if we just try to grind levels and milk money out of war. Fence-sitting for levels and profit, yes?"
In The Wayfarer's Guild → 1 mo ago Forum: Casual Roleplay

"Hn." Was all the cloaked knight said aloud as he beheld the guild hall's common area. He'd pulled his hood off before entering and removed his helmet, tucking it under his arm. For months, he'd tried to avoid showing his face whenever possible as a wanted man, and he couldn't deny that it felt good to have some measure of safety and security to feel fresh air on his face. For now, at least.

The Guild itself was...adequate. It certain wasn't the barracks he'd lived most of his adult life in, but that was a thing of the past now. For a last resort for thieves, scoundrels, and criminals, it was certainly less shabby than he'd been expecting. That was more than enough, really.

Mathias looked over those gathered at the table with him, setting his helmet down upon the table for now. Some sort of horned nature man, what he now understood to be a tiefling, and, the biggest shock of all, what seemed to be a full-blooded human. A blind one, at that. Just a year ago, he'd never seen much of any race besides half-orcs, dwarves from the mountain's depths, and the occasional foreign trader. It was almost a good thing he'd spent so long on the run, considering it had let him acclimate enough to the culture shock he'd experienced ever since he'd been run out of Tyrcliff.

"If no one else wants to break the ice, I will." Mathias grunted, nodding briefly at those assembled. "Mathias Rugal. Former knight. I'm looking forward to fighting alongside you lot."