STATUS: Do You Swear to Protect and Uphold the Warrior Code, Even at the Cost of Your Life?: The Rise of WillowClan 5 mos ago 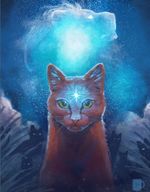 5 mos ago
Current Do You Swear to Protect and Uphold the Warrior Code, Even at the Cost of Your Life?: The Rise of WillowClan
1 like
3 yrs ago
Looking for fantasy RP's to play in!
1 like

In The Rise of WillowClan → 4 days ago Forum: Casual Roleplay

Sunfur folded his paws under his belly and settled down near Fernstar by the entrance tunnel. Fernstar and Blackpelt were eating their traveling herbs while he and Stormheart waited patiently for Redleap to join their patrol. Where is Redleap? We can't just sit here and stare at our paws all day! Sunfur admittedly was more worried it seemed than most of his Clanmates because he had known Maplestream the longest. They had decided to stay together after meeting in the woods so many moons ago, before either of them had even met Fernstar. They had grown very close during that time and he had almost begun to look at her as a sister. Although he did find it strange that Maplestream would just take off without telling her Clanmates where she was going; it was unlike her, and he wasn't sure whether or not she had a reason. Although he knew she was a warrior and could fend for herself, no cat had ventured beyond a certain point in WillowClan's territory so no cat was sure what dangers could be present outside the Clan's borders. But he knew one thing, the rapids were the territory's biggest threat. The water was colder than anything Sunfur had ever felt, violent and angry. Large rocks sharper than claws jutted out of the surface of the water along with other debris such as large branches that the forceful winds may have broken off of the large trees that hung over the banks. He shuddered as he imagined what any cat could do to save themselves if they were to fall in. He questioned whether praying to StarClan for your life would do much good in that amount of danger. . .
Shaking his head, he decided to try and focus on the conversation going on between the Clan's new apprentice Honeypaw and Stormheart. Honeypaw was eager but anxious, as most apprentices are when they begin their training, and Stormheart was reassuring her. Partially through gloating and partially through recounting his training when he had first come to WillowClan. He flicked his tail in amusement at Honeypaw's wide eyed reactions to his stories; they seemed to be helping. Part of him had hoped that Fernstar would have chosen him to mentor Honeypaw but he would not challenge his leader's choice to appoint Spidernose as her mentor. Spidernose will mentor Honeypaw well, I'm sure of it.
In The Rise of WillowClan → 4 days ago Forum: Casual Roleplay
*Doesn't see user in my RP online for a while*
*Uses RP to pester his character until he posts* xD
@Ambra
In The Rise of WillowClan → 4 days ago Forum: Casual Roleplay

Interacting with: @Shadow Dragon @Hazelrah @Ambra
Peering through the grass at the entrance to camp, Fernstar waved her tail to signal Stonefall; she needed to have a private word with her deputy before departing. She noticed Stonefall and Spidernose were sitting together sharing a piece of prey and she chuckled to herself at how nervous Spidernose seemed. I wonder if any cat will ever be interested in me like that. . . Fernstar thought. Being leader of her Clan was an honor in and of itself, but having a mate to share it with was something special apart from the role of leadership. But she couldn't focus on that now; StarClan had summoned her. Bending down to eat the herbs Blackpelt had brought her, she flashed the tom a greatful look. She was glad that even in this harsh leaf bare, there had been enough traveling herbs for the both of them. She didn't know how long their journey would be, but she hoped to be back within two sunrises. Leaving her Clan alone made her anxious, especially with foxes prowling about. Raising her head, she scanned the camp for Redleap. The tom hadn't joined herself, Blackpelt, Sunfur and Stormheart and she wondered where he was. Waiting for her deputy to approach her, she kept her eyes peeled and waited for the tom to appear.
In Trial of Shadows | Warrior Cats → 7 days ago Forum: Casual Roleplay
Im gonna be really sad if this is already dying :(
In The Rise of WillowClan → 18 days ago Forum: Casual Roleplay

Uncertainty and fear washed over Maplestream like a cold flood as she began to scan the nearby territory for anything that may indicate the presence of the strange cats. Anxiety prickled in her pelt as her head swam with thoughts and what she should do. Surely this was more important than scouting the territory ahead of Fernstar and Blackpelt. Of course, she had never expected to be derailed from her plans by something so startling, but she was certain now that she had to streak back to camp and catch Fernstar before it was too late and she had left camp. Struggling to keep her fur flat, she quietly began stalking back in the direction of the WillowClan camp, her eyes and ears more open to her surrounding than they had ever been before. Every few fox lengths she stopped and opened her jaws to try and catch any remaining scent of the trespassers; but she found nothing. Whoever these cats were, they certainly were not the pampered kittypets she remembered from the Twoleg place she grew up in. But she had never met any other Clan cats who were not her own Clanmates. Fernstar had told her so many moons ago that the four Clans who lived around the Lake had fallen apart long before she was born; disbanded due to resentment and being torn apart by battle after needless battle. No one knew where the ex-Clan cats had gone. She imagined some of them had wandered off to live as loners. Others may have finally given in and taken up the soft life of a kittypet. No cat knew. She would find out who these cats were however; and more importantly what they wanted with WillowClan.
In The Rise of WillowClan → 18 days ago Forum: Casual Roleplay

Interacting with: @PrankFox@Shadow Dragon@Ambra@The Elvenqueen@Hazelrah
Casting a glance over her shoulder at the medicine den, Fernstar perked her ears at Duskwing's news about Moosepaw's warrior assessment. He would be ready to be made a warrior by the time she returned from the Moonpool. "Excellent. Assess him while I am away and when I return, the first thing I will do as a StarClan appointed leader is perform Moosepaw's warrior ceremony. I shouldn't be gone for more than a sunrise." Blinking farewell to Duskwing, Fernstar padded out of the entrance tunnel and paused to speak with Spidernose and Honeypaw. She dipped her head to Spidernose as she stood at the entrance to camp, waiting for Blackpelt and the patrol of warriors setting out in search of Maplestream to follow. She then turned to Honeypaw and smiled as a soft purr rang in her throat. She padded up to the new apprentice and rested her tail over Honeypaw's shoulders. "Sitting vigil is the first way to prove to your Clanmates that you will always fight to protect them; until you walk with StarClan. While I'm gone, I hope your training begins with a good start. I know you will do well."
Waiting for her medicine cat and warriors to emerge from the entrance tunnel, Fernstar realized how nervous she was. Even though she had been leading WillowClan for moons, she was always aware in the back of her mind that she had never actually been appointed by StarClan and given her nine lives. To tell the truth, she had never known if StarClan would speak to her at all. She had always used her best judgement when making decisions and of course, always had her Clanmate's best interests at heart. What more could any cat ask from their leader? But she knew that with Blackpelt's help, she could receive her nine lives, and become a leader worthy of padding alongside the leaders of legends her mother had always told her of. Bluestar. Firestar. Onestar. Let me follow in your pawsteps. . .
In The Rise of WillowClan → 29 days ago Forum: Casual Roleplay
@Hazelrah Hey I know you're new to this platform so I figured I would help you with your mentions so they show up right. When you mention someone you want their name to turn orange like your name did in the beginning of this post here. And in order for that to happen you need to put their name in brackets. So it should look like BRACKET@NAMEBRACKET
Get me?
In The Rise of WillowClan → 29 days ago Forum: Casual Roleplay

Interacting with: @PrankFox@Ambra
Sunfur dipped his head in a polite gesture towards Fernstar and confirmed Stormheart's assertion of confidence. "Believe me I'm just as concerned as you are Fernstar. But she hasn't been gone for long so she couldn't have gone too far; maybe her scent trail is still fresh." As Fernstar padded towards the medicine den, Sunfur turned towards Stormheart and Redleap and began thinking through what their plan of action would be in their search for Maplestream. He wasn't sure if they should stick together and patrol the same areas of the territory or if they should split up and cover more ground. Either way, he wasn't going to rest or stop worrying until he knew where she had gone. Maplestream was his best friend, they had been friends for more moons than he could count. Himself, Maplestream and Fernstar were cats who formed WillowClan all those moons ago; that was something special.
Snapping out of his thoughts, he tried to relax his shoulders and addressed his patrol members. "We're going to need all our attention and strength come sunrise. I'm going to grab a piece of fresh kill then retire to my nest for the night. I will see both of you as soon as the sun rises." He turned tail and padded past Spidernose and Honeypaw talking excitedly about the apprentice's upcoming training. It was good for the Clan to have young paws on their way to becoming warriors; and he wondered what the Clan would do when both their apprentices became warriors and there were no new apprentices to train. It would be strange that was for sure. Approaching the fresh kill pile, he picked up a small bird he thought would suffice until he could catch something tomorrow morning. He laid the piece of prey on the ground next to his nest and settled in, hoping the pads of his paws would warm as he tucked them under his belly.
In The Rise of WillowClan → 30 days ago Forum: Casual Roleplay
ALSO @Hazelrah's character Stonefall is the new Clan deputy. I will be leaving it up them to come up with the story of how this happened; but that's changed because the person playing Brambletail hasn't been around at all and the other person expressed interest and is more active so. . . it only made sense. No hard feelings but it's what's best for the RP and the story in general
In The Rise of WillowClan → 30 days ago Forum: Casual Roleplay
@The Elvenqueen I love the picture text you found for Spidernose! It's hella pretty!
© 2007-2017
BBCode Cheatsheet