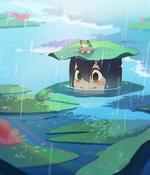 In Persona: The darkest light → 12 mos ago Forum: Casual Roleplay
@Jangel13 Hey you! Sorry for my absence. Things got really busy at my job, partly because of the pandemic. I got laid off, and am not that much in a mood for writing... (Thank you Stress !)

Anyway, just dropped by to say Sorry, but I,ll leave you guys to continue without me in this. RP looks promising, I hope you guys have fun. I did not do much anyhow, and would rather focus on only one RP for now.

That's already too much details, but thank you for having been patient and having let me a second chance. Have Fun. :)

Thank you to everyone. *
In Persona: The darkest light → 12 mos ago Forum: Casual Roleplay

As with everyone else, Kyoko heard the blood piercing scream. As with anyone else, she was took aback by this and stunned for a second, looking up. Though unlike most of her fellow victims of the serial killer - not that she knew it as of now - she was completely uninterested with any form of investigating. At all. Kyoko was content that the class was going to go on as planned for everyone...or almost. One of them, Felix if she did not mistaken, just walked right out. What could she do, though?

The class ended, and that was that. Kyoko had managed to almost get it all out of her head as she was heading towards the library. On her way, she saw Ikotsu who seemed to be lost in his mind and heading the other way. That's when she realized that, in her absent mindedness, she had headed towards the location of the scream. Something which she noticed only after hearing voices talking and, before she could stop herself, peeking into the room.

There she saw multiple people speaking. Most were students. Some, she recognized. Then there was someone whom looked like they did not belong. Despite her inner voice telling her to never mind all this and leave, she could not let this be. She stepped into the room, last to enter for now, and spoke up;

"You all shouldn't b-be here. T-this doesn't concern s-students..."
What she intended to be stricly said came out weakly, and low. In fact, they might not even have heard it.
In Persona: The darkest light → 12 mos ago Forum: Casual Roleplay
That is what I also thought about. Probably the way I'll go about this.

EDIT: Posted what I could, with little inspiration and prompt I didn't know what to do so meh. Mostly, I wanted Kyoko to be on the site with everyone else.
In My Hero Academia: Another Story → 12 mos ago Forum: Casual Roleplay

"This is Happy Dusk, he's - Cut it out !" Erika said as Happy Dusk came back towards her. Although as Freya was asking her question, the entity tried to grab something invisible to them from another student passing nearby.

"...he's almost as annoying as y-" she stopped, seemed to think about her words and didn't say anything. Rather, she listened to Gabby's description of her quirk. Despite her best attempt, Erika couldn't help but be impressed. It looked and sounded...impressive, useful.

Erika's eyes shifted to Freya. She had a Cat Quirk - that much was obvious from what she saw, heard and was told so far. Like most animal quirks, it was simple and effective; a good All-Around.

"...I feast on negative emotions!" the entity said out loud to them, coming out from behind Erika. Erika who seemed to give up trying to shut him up. "Stress is a favourite of mine, I'll say! Though it may be because of this school environment we're in, but I really got a..." as Dusk was launching itself into a monologue on the subtleties of emotions tastes, Erika let out a loud sigh and spoke up, leaving the ghost to his low ramblings.

"Yup. Negative Emotions are how Hapy Dusk charges up - they also have a bad habit of making him proportionally get happier." she said, crossing her arm with a bored look on her face. She looked over at Gabby.

"You are our winning condition." she bluntly said.
"No matter how hard I tried, I can't downplay that Quirk. It looks useful enough, and potentially strong depending on our matchups. Kitty Cat over there seems like she's a good all-around quirk, and I am a lot more defensive. So it defaults to you being our way of winning. Which is annoying."

@Nyahahameha@LuckyBlackCat
In Persona: The darkest light → 12 mos ago Forum: Casual Roleplay
Sup !
I'm dropping in to say I am currently catching up on RPs. YOu can probably expect a post from me tonight. :)
I just need to find a reason why my character would want to investigate at all - and mingle with the other characters. I didn't write her to be inquisive at all.

Still lost somwhere in her mind, Kyoko barely noticed the arrival of more of her peers until, eventually, in came their teacher and class began.

Like most, focusing solely on the class was harder than usual but Kyoko made it a highest priority to do so - as with everything else academics. Even for her, though, it was hard to remain focused as the image of that girl periodically came back to her mind every so often. It was for that reaosn that, in an attempt to change her mind, she noticed the person sitting beside her in the front row; Kevin Coal.

His was a strange name, foreigner for sure, although Kyoko did not judge based on those details. However, she was not above judging others on certain occasions...such as when someone was pretending listening to class while checking their phones. The young girl aspired to many things, and in the more immediate she wanted to be chosen s a member of the student council. So, she had to act the part in order to be noticed. It was for that reason that on the first occasion she had, whether it be during a pause or some sort of free time where people could talk or work together, Kyoko mustered all of her courage to put on a serious face and, from her seat, slightly tilted towards him and said;

Her voice was trembling, her face was lightly red and she did not look directly at him - but she delivered the intended message.

And that was mission success enough for her for now.

@World Traveler
In My Hero Academia: Another Story → 1 yr ago Forum: Casual Roleplay

Strangely enough, throughout all of the chaos that happened in the moments previous to the beginning of the event, Erika had remained silent, calm and poised in her corner. She did not snicker at anyone or used of her sarcasm and attitude at any moments - something that might have surprised even Alexis and Momo, her two long time friends. It wasn't certain if she was focusing, tired or if she was arguing inside with Happy Dusk.

"You know, most people dislike stress. They just can't deal with it, you see? It needs some degree of preparation. Of course it's going to be stingy or stale if you gulp it down - but with a little love, it's delicious...and such a varied menu we have! The Academy should be holding exams and what not every days of the week, if you ask me."

"No one's asking you." Erika couldn't help but say out loud, not that it mattered very much. Alexis may have been around, but Momo was very much mixing up with those brats from 1A. Erika couldn't be surprised, too, knowing Momo and all. SOme of them looked like they had energy that could rival her own, something she surely was not sued to with herself and Alexis.

When the announcement was being said, Erika wasn't long to get a move on. Doing so moved her a bit closer to the 1A group that had gathered, but still behind them. Everyone was listening to Miss Carmine, Erika included...so anyone not solely focused on her might be able to notice a big, semi-transparent pink fog-like shape hovering somewhat above Freya, using both of it's arms as if it was bringing in stuff to it's mouth. Towards the end of the announcement, Happy Dusk mimicked as if he was gathering more of that food only he could see, glanced over at Gabby...and grabbed some of her annoyement at herself for staying up too late. Erika noticed at about that time, sighed and headed towards to two.

Upon arriving, she immediately launched at them; "Stop stressing so much, it won't help you perform any better - and it certainly won't help me." and then looked at Gabby "Sleeping so late was irresponsible at best, didn't you think of the teammates you'd be teamed up with?" she sighed "I guess it's not all bad, though - I'm all charged up." she said with the hint of a smile.

@Nyahahameha@LuckyBlackCat
In Persona: The darkest light → 1 yr ago Forum: Casual Roleplay
@Ryteb Pymeroce @Jangel13 It's true that I have a busy schedule, and not much free time in front of a computer as I used to, though. I hate keeping people back, but I can pump out good enough posts once in a while. My answer came out due to the fact that I had never heard of the expression

'' Last holdout '' before, and googling it gave me : '' a person who refuses to reach an agreement until certain terms are met '' wich seemed a bit excessive as I refused nothing. >.>

I think your RP has potential and I like my character, so I could come up with a post between now and tomorrow evening for sure. Is that acceptable?
In Persona: The darkest light → 1 yr ago Forum: Casual Roleplay
@Jangel13 Really? Well. If we're already at a 'last chance' then I'll have to drop it here. You meant for this to go a lot faster than I thought it would, and I'm too busy to post every other days.