Cats Will Rule The World

STATUS: The good: Finally going back to work tomorrow! The bad: It's hotel housekeeping. The ugly: The day after Valentine's Day. 2 mos ago 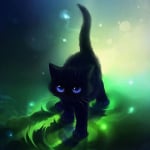 2 mos ago
Current The good: Finally going back to work tomorrow! The bad: It's hotel housekeeping. The ugly: The day after Valentine's Day.
10 likes
2 mos ago
A major issue with a close friend just came up, and this may be the end of our friendship. Posts will be delayed while I try to come to terms with it, so please bear with me.
3 mos ago
Blackmist16: Status bar updates. Sometimes like fine poetry. Sometimes - what the fuck?
2 likes
8 mos ago
Possible uncommon opinion: Ducks are way cuter than swans.
6 likes
8 mos ago
Not all cops are bastards, but too many are, and get away with it no less.
2 likes

And that was creative, with the Magnemite xD
In Pokemon: Chronicles → 11 days ago Forum: Casual Roleplay
@jujube I feel I've opened up more disastrous baking scenes later in the RP...

Antoinetta sighed. Zaria hadn't known? Ok, she hadn't known about the living arrangements either, so she couldn't fault her for that. Still, a kitchen that looked like two Alcremies had battled there was NOT something she was in any mood to deal with. Neither was a poorly stocked fridge.

To make matters worse, Zaria's idea of fixing the situation was to present her with the cake, if it could even be called one. Watching Zaria carve a crumbling slice, Netty couldn't help wrinkling her nose at the burned smell. How could a cake be blackened on top and practically raw in the middle? "It, uh, certainly looks interesting," she said, her tone leaving no ambiguity as to what she thought.

She hesitated before accepting the plate. With the week's food supply now limited, might as well make do with what was around. Taking a spoon from the drawer, she scooped up a small morsel of the culinary disaster and grudgingly tried it. Her expression twisted into a grimace. This stuff was practically still dough, yet somehow full of grainy lumps. It took all her willpower to swallow the gritty, chewy mouthful.

"Ugh. You call this a gift?" She set the plate down on the work surface at arms' length. Mellona, who'd been buzzing around a patch of spilled sugar, turned and glared at her. Netty huffed. Yeah that had been a little harsh, but surely someone who'd planned on living alone should know the basics of cooking. Even so, she bit back slightly as she continued. "You know, if you're going to use half the food, you'll want to learn a thing or two about baking. I can show you how it's done, with poffins. Just don't mess up the recipe book."

Mellona, meanwhile, turned her attention to Magnet as he mimicked her greeting dance. Giggling, she returned the twirls, the two Pokemon getting along much better than their trainers.

@Ryik Awesome song, I like the calm feel that slowly becomes more intense, it's a nice contrast to the typical frantic battle music. Definitely fits Troy.

Antoinetta stopped, eyes wide, at the sound of an enthusiastic voice. She'd thought the match a humiliating experience for both herself and Mellona, but some people had admired the performance? And they appreciated Combees? Her smile returning, Netty stood tall and let Mellona out.

"Thanks! She's been training for contests for a while," Netty explained, petting one of Mel's upper heads. The Combee, in comparison to her trainer, didn't seem too bothered by the defeat, instead doing a little twirl for both students. "Combees are pretty graceful dancers anyway, I mean it's an important form of communication for them. So it's only logical to work that into contests." Dropping that fact as that awkward kid in Sinnoh would have made her sound like a nerd, but hopefully it would sound much cooler from a budding coordinator addressing the beginnings of a fanbase.

It turned out she didn't have to for everything to go Wepear shaped.

"Pfff, please," a student piped up. "I don't get what you guys are so excited about, it's just a Combee. Don't they have, like, the same four moves until they evolve? And you just saw how well they do against Rock types." The girl fixed her smug gaze on Netty. "You'll have to up your game if you want to make it big."

The rush of pride faded to a sinking sensation. "Oh really?" Netty folded her arms, glaring. "Four moves, many combos, may I remind you." Not that she'd had a chance to pull off any combined moves in the battle. "Anyway, I'd better get going, but trust me, you'll see what I mean."

She hurried into the grounds, fists clenched as Mel buzzed along by her side. Of course that had been too good to be true. "Some people don't know what they're saying," she muttered to the little Bug type.

As promised, she led Mel along the floral-lined paths, letting her explore the vast array of summer blooms. The Combee flitted from sunflowers, to dahlias, to a lavender patch, trying to decide on a favourite nectar flavour. Netty's mouth twitched up. By the time she headed to the dorms, the walk had almost eased her mind... Yet, again, such moments couldn't last.

She opened the door to sounds from the kitchen, and the smell of something sweet baking. Great - she'd gone and ended up with a roommate. Had she really been so nervous about the application, so tired from those sleepless nights thinking about it, she'd messed up some of the requests? Or was it more about the limited places in such a prestigious school? Either way, she was stuck with someone who'd see her at her worst. Hopefully it'd be someone she could get along reasonably well with, at least...

That hope vanished when she reached the kitchen. A complete and utter mess greeted her, flour and food wrappers everywhere. In the middle of the chaos, stuffing her face with what must have been the week's supplies, was Zaria of all people.

In The Zephyr Extinct → 19 days ago Forum: Casual Roleplay
I was gonna wait for you @Plank Sinatra, but figured you'd have more to work with this way, hope it's alright!

@Mokley, with a few of us absent, does this RP need some more people? Obviously it's gonna be difficult to jump in right now, but at the next suitable point?
In The Zephyr Extinct → 19 days ago Forum: Casual Roleplay

Rose gave an agonised yelp as the Nox clung to her wounded arm, twisting it, pinning her to the ground. The creature that had weighed no more than an insect a moment ago now threatened to crush her. With her other hand, she grasped blindly about in the growing darkness, her fingers meeting only debris-littered floorboards.

Through the crash of plaster, an all too familiar voice piped up, bringing a surge of both relief and irritation.

*Finally, you feel like responding. You sound like you're about to ask for help. Remember you're the one who went off on your own.*

Rose could barely speak for the coughs racking through her body. Smoke caught in her throat and chest, that stench of burning flesh making her want to retch. "For fuck's sake," she spluttered. "If-If you're not gonna help me, at least help the others here! There are people, trapped, in danger... Just be careful!" Her good eye stung with tears, not just from the fumes, but the thought of what must be happening to the souls held captive. Screams echoed all around.

Over those screams came another voice she recognised.

The incident with Cedar and the other Nox fresh in her mind, Rose braced herself. This time, there was no impact, just a wave of light she saw through the redness of closed eyelids. The attacker's weight gone, she sat up and stared around, checking right away for the motor skates in her bag. "Whew... You alright Jay?"

She stretched out and flexed her arm, wincing. It didn't feel broken, but she'd likely have some severe bruising and stiffness for a while. Still, it could have been a lot worse. "Thanks," she rasped, with a trembling laugh as she looked up. "Now if it's not too late, we've gotta help the others..."

That momentary joy evaporated at the sight of Archer's face - or rather, the writhing mass of shadow obscuring it. Realisation weighed heavier on Rose than the Nox had. This was her fault. Fluke's words replayed through her mind, about going off alone. He was right. She'd been reckless, and now Archer had paid the price.

"Shit, no..." Crawling back, she yelled into the earpiece. "I screwed up. Archer, she's... They've got Archer!"
In Be my Sanctuary → 19 days ago Forum: 1x1 Roleplay
Yeah, at least they've started opening up a bit more, but there's still quite a bit of awkwardness. The bowl of questions, or a training session, could help.
In Pokemon: Chronicles → 19 days ago Forum: Casual Roleplay
@zeroSH Ooooh I've had a thought. It's gonna be interesting to see if/how Asa gets a Blissey eventually, considering Chansey evolves via friendship...

And for fairness' sake, I imagine he'd get those items.
In Pokemon: Chronicles → 19 days ago Forum: Casual Roleplay
@jujube Gonna post soon and have that happen!
© 2007-2017
BBCode Cheatsheet