@TJByrum I've got inkarnate if you want me to try and make something.

If you want to, have at it. But in any case, the Doofus Map I made up above should be sufficient for now lol.
In Battle of the Nations → 3 mos ago Forum: Advanced Roleplay
@andreyich @landain @jamesyco Alright guys I made my post.

This is less of a strategy phase I guess, because as they say "no plan survives first contact with the enemy", so trying to make up an actual strategy now would be futile because you would certainly change your plan once the battle begins and you see the layout of the enemy. Think of this as more of a "where should we put our troops" phase.

If nothing else, I would recommended dividing the army into the North Flank, the Center, and the South Flank. What units should occupy each? Of course you're all free to discuss alternatives here and determine it in the OOC, and then finalize it in your replies in the IC.

Edit: Landain ninja'd me, lol. He's got the right idea, something like that is a good start.
In Battle of the Nations → 3 mos ago Forum: Advanced Roleplay
Whether there was historical bad blood between the assembled forces or not, they were united in common cause to face an enemy stronger than any of them. Those forces under the command of the Duke of Nordmann carried out their tasks without molestation from the enemy. But that wasn't to say the enemy did not establish pickets themselves. They did not show any signs of aggression, however, and were only deployed to scan for signs of an advance. It seemed that Franciso Marion intended to keep a watch on his opponents, but his army would rest for the night and they would not advance until the following day.

The Allied commanders had all found their way to the central tent. Once the formalities were over they could each explain what their respective forces would do in the coming battle. The map that lay before them was fairly simple. The battlefield would be big enough to fit their entire force comfortably, still allowing room for maneuvers. Additionally they knew the width of the battlefield would allow their artillery - if placed at the top of their ridge - would be able to reach the other side of the valley easily.

Everyone who had faced Emperor in battle might be familiar with his tactics. For starters, he favored grand batteries: deploying the majority of his guns in a single location to wreak havoc on enemy positions. Naturally, the Allies might expect the Emperor to deploy his guns on the top of the eastern ridge.

Of course the Emperor did scout and probe the enemy with his cavalry. But in battle their main function was to support the infantry, flanking the enemy lines and exploiting holes where possible. In some cases they were able to plow through formations after the Emperor bombarded the positions with his artillery.

To start, perhaps the Allied officers should determine where they would deploy themselves behind the ridge, because once they crossed the top they would potentially be under fire from enemy artillery.
In Battle of the Nations → 3 mos ago Forum: Advanced Roleplay
@andreyich @landain @jamesyco I wish I could give you guys a cool map, but alas, I am no map maker. 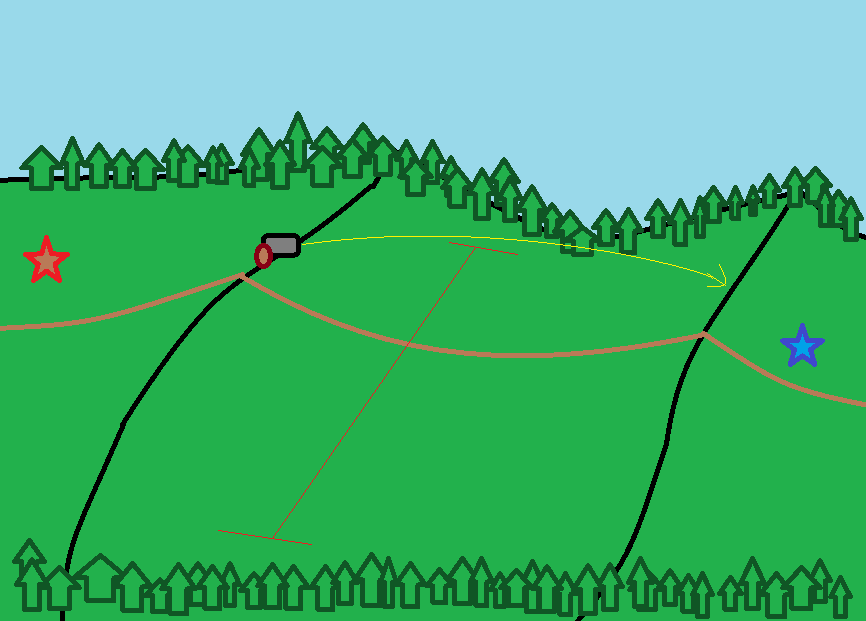 So you guys are camped on the western end, where the red star is. Francisco Marion is camped on the eastern end, where the blue star is. The red lines in the center are basically showing you that the entire Allied army could fit in the valley if each regiment lined up side by side. In other words, you won't have to worry about it being cramped - there's enough to move around. The yellow line is showing you the max range of the cannon. Basically if you have it on the top of the ridge it can shoot the other ridge.

The only difference from this area and Waterloo is that Hougoumont and La Haye Sainte are missing. Now at Waterloo, Arthur Wellesley used his classic 'reverse slope' tactic - basically keeping his soldiers on the exterior slope of a hill to keep them safe from artillery fire. Napoleon's cannons were still able to skim cannonballs over the top of the hill though and they did score some casualties. If you try to use reverse slope in this battle it will work as well as it did for Wellesley at Waterloo.

I am working on a post now.
In Battle of the Nations → 3 mos ago Forum: Advanced Roleplay
Alright, let me read these posts
© 2007-2017
BBCode Cheatsheet