STATUS: Ugh, 14-hour work day today, just now getting on here. I will reply to DMs now! 4 mos ago 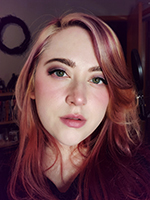 4 mos ago
Current Ugh, 14-hour work day today, just now getting on here. I will reply to DMs now!
2 likes
4 mos ago
I feel you, man. I only ever have specific rps in mind and I feel like a tween on the Neopets rp boards for it lol
1 like
4 mos ago
I'd be a bard, but I can't really play any instruments, so I'd be annoying the party by humming all the time and belting out Demi Lovato during battle to heal people or do damage.ppppppp
2 likes
4 mos ago
The printer is out of toner and a client needs these documents immediately. 🙃 Wish me luck!

I am a 24-year-old graphic designer for a small town newspaper.

My favorite role plays involve fantasy and dark themes. I especially have a fascination with vampires, so I would LOVE to join basically any vampire role play. If you ever want to chat with me, just send me a message.

What's your favorite horror movie? I'm looking for hidden gems that I haven't seen before!

In Has anyone ever done a 1x1 harem-type role play? → 3 mos ago Forum: Roleplaying Discussion
And I mean "harem" as in several love interests and one protagonist character. Not a literal harem lol

Does anyone remember when these used to be popular? Or, at least on certain sites they were. Anyway, I've got a hankerin' for some intimate vampire x human role play (and by intimate, I mean like up close feeding, emotional trauma/bonding/working through stuff together, not necessarily sex) and I could play either role. My main gender pairing I enjoy for this kind of thing is MxM, but I will also do MxF with the vampire being male. I'm just not interested in female vampires. If you want to try and persuade me, though, I'm open to that.

This will be my first rp since returning to this site after 2 years, so I will definitely be rusty. I would like to find a partner to bounce ideas off of and really get creative with the setting, world-building, character creation, and character development. I'm also open to the idea of playing more than one character.

Potential plots:
• Awakening an old vampire: A human happens upon the resting place of a centuries-old vampire and inadvertently awakens them. The vampire, finding themselves in a new and unfamiliar time/setting, must rely on the human to help them reacclimate. Details can be worked out (is the setting an old mausoleum and the human an urban explorer in modern times? A Victorian setting where a human seeking shelter from a storm in an old, seemingly abandoned mansion happens upon a chained-up coffin?) and I feel there's a lot to explore here.

• Post-vampire-apocalypse: Vampires rule the world and now humans either survive out in the wilderness in scattered camps hiding from vampire cities, are farmed for their blood within vampire-controlled settlements, live in the few human-controlled bastions as hunters-in-training, or as private blood bags for the more well-off vampires who can afford to keep live humans for their blood. There are multiple jumping-off points to be discussed here!

• Blood slave auction: The human is auctioned off to the highest bidding vampire, either in a regular auction setting or a silent auction/market setting. This plot is more railroaded, in my opinion.

• Vampire kidnapper: Your modern human is walking home from work one night when they're suddenly kidnapped by a vampire!

I will add more as I think of them.
In Back after a long time away ~<3 → 4 mos ago Forum: Introduce Yourself
Hi, everyone. I was recently getting the annual hunger for a good role play and I stumbled my way back to this site. I have yet to really have any successful role play long-term because my tastes are so specific, and seemingly not popular anymore. I might try my luck with the 1x1 searches for now, but I have dreams of making a nice, fleshed-out world that multiple role plays can intertwine together in.
In ✹☽ Vampires of Redhaven ☾✹ → 2 yrs ago Forum: Casual Roleplay
@Kinjaav@Cio

Lucifer listened patiently to his friend and nodded in understanding. The watery creature was already looking less fearsome as she swirled about in the large tub, features less sunken and skin appearing healthier. "I'm sure you two had an interesting history together full of adventure. Although, I'm not sure if I approve of the hunting of innocent villagers...even though it was a different time."

He lifted his shoe to allow Evren to take over mopping up the water and Lucifer gave him a quiet thanks. "I'm sure whatever means were used to bring her here, they were not of her own choosing. Supernatural trafficking has become quite the issue as of late..."

"Well, I would prefer that she not eat the clientele downstairs," he said with a half-smile. "I still need to afford my living and I can't do that if my business gains a reputation of a slaughterhouse." Lucifer looked to the creature now in his bathtub. There was something innocent and childlike about the way she was watching them from the safety of the water's surface. Then he sighed deeply. "We'll figure something out."

Aava's playful splashing made a couple of puddles on the floor beneath Lucifer and Evren. Standing and retrieving a plush powder blue towel from the silver rack, he used his foot to mop up the water on the floor with it. "It seems you're quite fond of this creature, Evren," he said. "And if she is a friend of yours, then I will do my best to carve out a decent living situation for her here. But you said she was in Finland the last time you saw her? How did she get all the way to Redhaven?"
In ✹☽ Vampires of Redhaven ☾✹ → 2 yrs ago Forum: Casual Roleplay
@Kinjaav@Cio

Lucifer led the duo through the alleyways as quickly as possible in the dispersing morning mist. It was the hour where people began stirring and the first few trickles of commuter traffic started to gather. His senses were on high alert for anyone that might be following them; even though mortals had been exposed to the common existence of vampires and werewolves, a water demon would be something new, something to fear, and possibly a trophy to be captured. As their destination neared, Lucifer could take solace in the fact that the nightclub below his penthouse would be closed already and there would be few humans milling about.

"Quickly!" he said, motioning for them to follow him up the fire escape. On the top landing, he ushered them inside and closed the door behind them.

The dwelling itself was quite spacious with two floors; the bottom one housing the living space, kitchen, and guest bed/bath; and the top floor housing Lucifer's master bedroom and bathroom. The rooms were immaculately clean and the furniture sleek and modern. He winced as the sopping water demon tracked mildew-scented puddles along his hardwood floors.