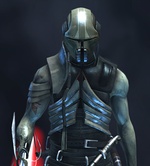 ,outgoing,friendly and warm to anybody.

SHORT BIOGRAPHY:Tyrone comes from a lower middle class family in Harlem.Loves sports especially basketball.Although serious about school he's more into basketball and dedicates as much time as possible to it.Hes a heavily recruited national prospect.His fathers a mechanic and his mother a clerk at a women's clothing store.
This is his third year here.Hes hoping the team improves over these past two years and wins state so he goes out on a bang. SHORT BIOGRAPHY: Jayson comes from a high class family consisting of his mother and sister (age 10). Jayson's dad sadly died when he was 13 in a fatal car accident. Though this left his mother a single parent she was still able to provide working as a secretary for an oil company. Even though Jayson spends most of his days trying to perfect his basketball skills he is still only above average at the sport. He hopes to some day perfect his skill and become a professional after high school and/or college.

Biography:Comes from a ritzy family in Queens,her father is a bank president and her mother owns a bakery.
Though she is serious with her schoolwork and plans to attend Boston University or Conneticut,she still hasn't decided.
However on weekends she's either partying or sleeping with someone.Doesnt have many friends.
Hidden 5 yrs ago → 5 yrs ago Post by Lady Athena
Raw —

Lady Athena Chaotic good with a hint of insanity

Member Seen 2 yrs ago
The Nomad

Short Bio: Darius comes from a bad home,his mother is on welfare and food stamps and has a serious alcohol problem.She and Darius live in a rundown apartment near Harlem.
It was here where he met his best friend Tyrone Mercer one day on the basketball court in the park.Darius has went to Yancy since he entered high school.
He played basketball his sophomore and junior year but was cut due to the fact he never took the game serious,constantly missed practices and caused trouble at games mostly from flagrant fouling and trying to start fights.
He's at nearly every party in town and is a very "promiscuous" guy.
He constantly cheats on his girlfriend Tabitha however whenever she's told she denies it saying "he loves her".Most teachers don't like him and many students don't either.

3226 posts
in 1716 days
Seen 1 mo ago
Bio
NAME:Bluebell Ayra
GENDER:Female
RACE/ETHNICITY: Indian
AGE: 17
HEIGHT:5'6
GRADE:12th
SPORTS: Track and field, Cheer, Tennis, Dance line, Basketball and Cross Country
CLASSES:Chemistry, Biology 2, English 4, Calculus, Algebra 1, Geometry, PE
CLUBS: None
VEHICLE:None
PERSONALITY: Shy but a good friend when you need one but only if you manage to get her to open up. She is helpful and kind but can get upset easily but doesn't show it. She is cold to people a lot if you try to become friends with her. She doesn't get along with people easily

APPEARANCE:Tall,thin,small frame. She has dark brown hair which is long and braided with beads at the end and she has mixed race skin. She has ocean blue eyes. She usually wears a white top and a red skirt.

SHORT BIOGRAPHY: Bluebell was born in a large family in another country. Her family live in India, England, America, Spain, Japan, China, France, Russia, Portugal, Germany and Italy. She originally comes from India. They abandoned her when she was 4 and she grew up in an orphanage.

SHORT BIO: From Brooklyn New York,his mother is a secretary at at the First National Bank,his father was killed in a gang shoot out.He loves football and wants to go pro someday.Though not as great as Tyrone he's a top pick in New York and has several smaller universities looking at him.
Not all that serious about school.
Hidden 5 yrs ago Post by Cheshire Cat
Raw — 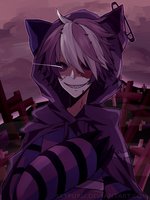 93 posts
in 1707 days
Seen 4 yrs ago
Bio
NAME: Daniel Rutherford
GENDER: Male
RACE/ETHNICITY: Caucasian
AGE: 16
HEIGHT: 5' 8"
GRADE: 11th/Junior
SPORTS: None.
CLASSES: English 3, Chemistry, American History, Financial Math, Teacher Aid
CLUBS: None.
VEHICLE: None.
PERSONALITY: Usually silent, can come off as a jerk, can be nice and kind if you get to know him, angered easily.

APPEARANCE: Average height and a thin build. Messy brown hair, blue eyes and pale white skin. Always wearing a black, zip-up jacket and usually has either a black or grey t-shirt on underneath. SHORT BIOGRAPHY: Daniel was born in a rural area with his family in the southern US. His father enlisted in the military and they got restationed here recently so this is Daniel's first day at this school. Ever since he was young he had an interest in learning the acoustic guitar and now that it is more easily available he begun teaching himself the electric guitar.
RELATIONSHIP STATUS: Single
Hidden 4 yrs ago Post by Epicness64
Raw —

Epicness64 Why are you staring? I'm not that weird!

Member Seen 4 yrs ago
Epicness64
Why are you staring? I'm not that weird!

9 posts
in 1649 days
Seen 4 yrs ago
Name: Kayla Attor
Gender: Female
Race/Ethnicity: Caucasian/Indian mix
Age: 15
Height: 5'4
Grade: Freshman (9)
Sports: Does a bit of track, but cannot go for very long distances.
Classes: Advanced Math, Biology 2, Literature, Physical Education, World History, Computer Science
Clubs: N/A
Vehicle: N/A
Personality: Kayla is very outgoing and positive, she has four older siblings, so is very much used to being told to shut up, or just plain insulted, but doesn't care. When she was younger, she tried to fit in, but gave up after seeing how snotty other girls could be. She's more of a tomboy than anything, and likes to spend time doing more masculine things. She hates it when people underestimate her, she claims, "if anyone's going to underestimate me, let it be myself, so I can kick myself in the head, and say there's always sheer luck on my side". The majority of her life she spends alone, outdoors. She loves to write, read and run. Kayla often complains how the air in the cities 'stinks' and longs to one day be able to fly. She claims that she must have been a bird in her past life, because she knows that feeling. Kayla also takes private lessons on playing the violin. Kayla can be a little arrogant, reckless, and impulsive.
Appearance: Kayla has tan skin, due to the fact that she's outdoors a lot, and brown hair. Her eyes are brown, and they've been called ugly a lot since they're so dark, they're almost black. Kayla is sleek and skinny, and a built to be a runner or volleyball player. Yet she hates the sport, so she isn't. Kayla hardly ever wears skirts, let along dresses. She usually wears shirts with dragons on them. She has an odd, pointed nose like an elf's. Again, recap. Tan skin, brown hair, brown eyes, elf-like noise. Nothing else too special about her.
Short Bio: I put a lot of stuff into her personality, but I'll give a bit more.
-Four older siblings
-Used to being teased when younger, and no longer cares about what other people think of her.
-Plays the violin (is a pretty good player)
-Likes to read, write, and run in the woods.
-Dreams of flying.
-Wants to be an Ethologist (study of animal behavior), but doubts she has the patience.
-Wants to be a falconer once she gets "old and boring"
-Has a Saarloos Wolfhound named Nanook. (They looked EXACTLY like wolves.)

2420 posts
in 1564 days
Seen 11 hrs ago
Bio
NAME: Avary Muse
GENDER:Male
RACE/ETHNICITY: White/ Caucasian
AGE: 16
HEIGHT:6'2
GRADE: Sophomore/10th
SPORTS: None
CLASSES: English 4, Biology 1, French, Library Aid, Literature, Computer Science
CLUBS:None yet
VEHICLE:No
PERSONALITY: Dark, cold, and secluded to most. But to others he can be pretty fun to hang around.

SHORT BIOGRAPHY: Avary just moved to Yancy from out of state. So that mean new kid, whoopee. He comes from a High Middle-class family. In his old school he didn't have many friends and was the antisocial weird kid, which will probably be his title at this school.
↑ Top
© 2007-2017
BBCode Cheatsheet