Mugendai na yume no ato no

STATUS: Digimon is such an intriguing franchise. 2 mos ago 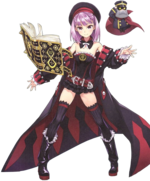 2 mos ago
Current Digimon is such an intriguing franchise.
3 likes
8 mos ago
Y'know with all the new Isekai concepts coming out, I wonder if there is an isekai concept for "Reincarnated as a Truck that sends people to other worlds"
3 likes
8 mos ago
Draw 2 Cards
1 like
4 yrs ago
When your bored but don't really know why.
2 likes
4 yrs ago
That moment when you have a billion ideas and can't write them all down
1 like

can i expect a response from you?
In Fate/Eternum — Reboot → 5 days ago Forum: Casual Roleplay

"I'll teach you anything you want.
Old things, new things, I know them all!"

Personality:
A meddlesome mother/elder sister type of woman that is helpful in taking care of others. Kind to others and strict to herself, Blavatsky is a girl of eccentricities and a woman of many mysteries but one would be foolish to forget that she is a genius endowed with a strong sense of self assertion. Tempered by a life where she would elope to live gorgeously in the magic world, even if she did disagree with the London mages association something that was never rectified up until her last moments.

She holds a passion towards her beliefs, and as such those that have no chance of comprehending the concept of Mahatma and hierarchies and the ideas it holds are of no interest to her. Those that show the potential to understand it however? She won't let them escape her so easily without being able to inform them of these concepts.
Finally, she holds a great love for the creation of her very specific non-combative familiars based on Colonel Olcott, and is never seen without at least one of these familiars.

“Don’t you think that a woman of many mysteries is fine? Yes, that’s not it. There is only one truth, which the people cannot perceive; everything is known by Mahatma!”
Stats:
Strength: E Endurance: E Agility: D Mana: A Luck: A Noble Phantasm: A
Class Skills
Territory Creation: A Item Construction: B
Alignment
Chaotic Good

Personal Skills:
Mahatma: A
The magecraft that can be used include Summoning, Black Magics, Alchemy, Formalcraft (Elemental Conversion), Rune Magecraft, Ancient Egyptian Magecraft, and so on, covering many divergences. It is also possible for Blavatsky to employ the Holy Church’s Baptism Rites.

Also, by employing multiple Thaumaturgy Foundations simultaneously, she can even "miraculously" succeed in manipulating extremely powerful magecraft. Because it is essential for a lot of luck and chance to factor in this as well, it can be concluded that this simultaneous employment does not always work every time, so the effect becomes as such: “the invocation of extremely powerful magecraft sometimes occur.”
Search for the Unknown: B
Mana Tuning: C
Noble Phantasm
Sanat Kumara
Venusian God, Heavenly Lord of the Flame
A Rank, Anti-Army Noble Phantasm
UFOs, laserbeams and total incineration
A giant clad in shining Ether reveals its form alongside a strange flying object and attacks the surroundings by burning the area with flames, Blavatsky is inconsistent with the origin of this noble phantasm

I'll have Sunny grab Bacchusmon's if no one minds. Its namesake seems suitably zany for Sunny and Impmon's dynamic. Though I don't know if it really affects anything other than... letting us digivolve, if I'm backreading right?

Thats the jist of it yes, but I am considering adding a little bit more weight to it given how everyone seems so intent on specific books.

But really its just to let you digivolve yeah.
In D:\World\DigitalShift\The Yokai Incident\ → 19 days ago Forum: Casual Roleplay
Posted

Wisemon is losing control of himself as a result of data corruption stemming from that missing book.

He says to take them and run.

Everyone but @Raineh Daze grab a book~

Wisemon would fixate their eyes upon the fixtures that upheld the great books well emblazoned marble, no damage to any of them, hence why Wisemon was so stumped. Nobody should have the authority to remove them so easily save for Wisemon. Hence why it had to be these unknown variables. That was why Wisemon without a doubt believed that even if they did tell the truth. They weren't being entirely honest with the protector of the library that was Wisemon's personal belief though the Librarian could at least be somewhat cordial.

Turning its towering figure around to the arrogant little chessmon and its arrogant partner. Wisemon would stoop low to look at them both directly and personally. "Why do you think-process-CONCLUDE that I would allow a arrogant-suspicious-INTRUDER like yourself to freely move about my library while under suspicion-interrogation-WATCH, So know that you have no right to make such threats in this library." Wisemon would say before creaking back up to full height. Towering over the two as an imposing figure, before merely floating away.

Wisemon would next address the organism that was paired with one of the rather rare Sistermon types. Wisemon wasn't unfamiliar with the standard respect one should give to angelic digimon, but Wisemon also didn't really care for such formalities. "Visitors, Rare if at all, Lending? No. Teleportation of books sounds like good idea. Will consider for future investment." The Librarian said with seriousness to what was probably a stupidly complex idea.

Indeed Wisemon had answered all the short questions they felt like responding to, because someone had said something that was quite interesting. The girl with a Tinkermon far away from home had brought up the intriguing factor about digivolution. But the girl with the Renamon had asked directly about the books themselves. Wisemon could answer both in one explanation.

"I have already told you of the importance and power of the books, But if you wish me to go into detail about the iconography..." Wisemon would say, Their voice a calm more readily to explain sort of tone. Indeed if there is anything this Digimon liked to do. It was to show their intellectual know-how about all things.

"As you can see there are seven pedastals, but only six books upon them. The ones that remain are Plutomon, The god of the underworld, whoms symbol is that of a dark diamond. He manages the underworld of data. Neptunemon, God of the Net Ocean with the symbol of the horse and trident. Vulcanusmon, god of the mountain forge and the owner of the grandest mines of the digital world whom uses an anvil as his symbol. Dianamon, the harbringer of the night and the goddess of the moon represented by that very same lunar rock. Venusmon the lover and the compassionate, She both drives Digimon to great success and to ruin with her overwhelming love for all things, represented by her dove and oyster. Last of the ones that remain is Bacchusmon, The foremost drinker and the party holder for all Digimon, represented by the wine glass. They are all gods compared to you and I, the gods of the digital world." Wisemon would conclude.

"The final book, and the one that was stolen contained" Then Wisemon would keel over in agony clutching its head in pain as if drawing that much information had hurt it in some way. As it quickly shook its head. What was in the last book. It attempted to try to recall the information again, keeling over once more, something was wrong. What was it talking about. The gods, Olympos XII. The intruders. Jupitermon.

In pain the digimon would reach out towards the books to try to read it to refresh its memory. Accessing these books should allow it to remind itself what it was talking about and ground itself. With outstretched palm Wisemon arbiter of the node and keeper of the great library would attempt to read Bacchusmon's Tome.
Data corruption at unacceptable levels
Access Denied

The voice would bellow loudly.

Leaping from rooftop to rooftop to close in on the signal of the digital shift, a white-furred digimon with a flowing red cape would be rushing to the scene. Hack had been sent alone because not only was he faster, he was also capable of slipping into the school unnoticed. The old geezer would have to wait outside. They would assess the situation before closing the rift. God forbid anyone was trapped inside. But it was the best they could do as of current until they know what the enemy was. All Hack and by extension the rest of Dojo team knew was that the longer the rifts were open, the more unstable the real world would become and they couldn't risk another Yokai incident...

Thus it would continue running headlong towards the school.

Wisemon in their fit of anger and rage was causing the very library to shake, books would fall off their shelves, others would turn red symbolising damaged or corrupted files as a result of Wisemons fit. To see such a figure that had up to this point been at least somewhat intelligent and polite if at least threatening, be devolved down to a rabid beast and then even more frightening. Wisemon would just stop and calmly lift itself up.

"Take them. The books. Take them far away from here and do it quickly. I am no longer suited to be the protector of these books. I do not care what your intention is, if your a bad person someone else will have to stop you. Just take them and leave before I inevitably change my mind." Wisemon would say their voice free of distortion. One last island of sanity before the darkest abyss of mindlessness. They were twitching oddly, like a bug being probed with a sharp stick. Their book they stood open shedding pages.

It seems whatever Wisemon was doing it was only to stall for time.
In D:\World\DigitalShift\The Yokai Incident\ → 22 days ago Forum: Casual Roleplay
Alrighty, with those responses I feel I can get right down to business.

Wrapping up this opener.
In D:\World\DigitalShift\The Yokai Incident\ → 25 days ago Forum: Casual Roleplay
Alrighty, I will work on the GM then, I appear to have caught something given how tired I feel, So it may be slow. But given that, I might as well ask for some future character projections,

Will you guys be maintaining eachother as one large group or would you prefer to split off into smaller teams (Easier to manage) to better foster specific interactions with people.