STATUS: Long work days. I'll respond to stuff when I can. 9 mos ago 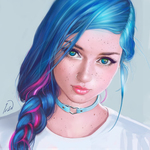 9 mos ago
Current Long work days. I'll respond to stuff when I can.
12 mos ago
Trying out this here RP-Guild thing.
4 likes

I've RP'd for many years now... okay like, 15? That's a lot right! I'm a native English speaker, central US though I can never remember my actual time zone. But that should give you some idea of whether or not the sun is up or down for me, when it's up or down for you.

In Morgan's Wild, Fantastical, Unbelievable, Slightly Psychotic Adventures (18+ F x Fu (Dark Themes, Open to Discord) → 12 days ago Forum: 1x1 Interest Checks
Warning: This is an 18+ RP with at the very least a 50/50 smut to story ratio and could likely involve some fairly dark themes. You have been warned.

This is a story about a girl named Morgan who is one part insane, one part psychotic, one part a hopeless romantic, and one final part extremely adventurous. A burning crush on her psychiatrist? Check. A burning hatred and desire to bring great harm to her greatest rival? Check. Probably sees things, misunderstands things, or outright believes entire stories are playing out in her life that aren't real or never really happened? Yeah, even that, she's got some problems.

In this particular story we'll each be playing a multitude of characters in Morgan's life as we blur the line between reality and fantasy. Seen through the mind of Morgan, the world will twist and warp into the fantasies she dreams up and the crazy, unhinged ways she translates the world in her own head. What is real, what is fantasy, what really happened and what was all just in her head? The truth might be crazier than you think, and it might not be so easy to figure out what the real story is.

But that doesn't really matter does it? We're along for the ride in this crazy world of hers, and whether that means that every single thing that happens is just the crazed hallucinations of a girl pushed too far, or if even the craziest most outlandish things truly are reality, and we're just the ones who can't comprehend it all... what truly matters, is that we have fun and enjoy each moment as it happens. It's not about the end goal, it's not about figuring out a puzzle, it's about enjoying each other's company, and going to crazy new heights of craziness.

I should mention that this is a modern 'Slice of Life' RP at its core, but the longer it goes on the more different genres will bleed through. Fantasy? Sci Fi? Horror? Who knows what might happen next. One day they could be living in their very normal neighborhood listening in on the daily weather report, the next they could be battling against aliens on board a starship that landed in their backyard. And yet the weather report as Morgan remembers it could be completely wrong, while the battle with the aliens really did happen. Again, it's not about what is or isn't true, it's about simply leaning into the craziness that anything could happen, anything could be real.

I want a partner who is active, capable of responding regularly (Even possibly playing over something like Discord) and who won't just disappear randomly or suddenly not even log in for weeks on end.

I want a partner who can write realistic characters, takes into account everything I myself write, and who can realistically and descriptively write everything they do without simply ignoring actions or leaving things out. There's a big difference between a writer who says "She danced" and a writer who types out each motion of their body. (That being said I'm simple minded and just linking a gif would make me go 'okay that works')

I want a partner who is open to ideas, doesn't take things too seriously, and won't shoot down all my ideas because 'I'm not really into that sort of thing'. I understand everyone has interests, but when everything I put out there is one 'I'd rather not' after another... I lose interest.

I typically have many character ideas in mind. This includes image references for them, their roles in the RP, and sometimes even some personality traits. But I try not to be too limiting on letting you take the things I already have for a character, and make it your own. (I don't think it's too limiting or outlandish to say 'Her Psychiatrist is incredibly wary of things she does and says')

I use many different kinds of character references both for my own characters and characters I want to be used in the RP regardless of who plays them, but the most common references I use are: General Art, Anime, 3D Renders

I have rather outlandish interests when it comes to characters I would like for my partner to play. Specifically this comes into play with body types, and I have been known to have interests that make some people go "that's a bit much for me". Now, it's nothing too insane, but naturally, everyone has their own opinion of what is too much and what is not. So I'll just say, you should probably expect the worst from me... and it you expect the absolute craziest tastes, then you'll at least be relieved when it's not THAT bad. Right? Right.

I'm typically available every single day. However, interests shift all the time, things come up, motivation and drive come and go. Some days I may simply not be up for writing. Others I may respond with a new post within 10 minutes of you sending one my way, all day long. It really depends on the day, but I will promise you that I will not simply drop the RP or disappear without reason. (The exception is when people message me with interest, shoot down all my ideas, and expect me to still be interested at which point I just stop responding. Please don't message me basically going 'I'd like to play, but howabout we do something completely different-')

This RP will probably get fairly dark in some places. While it's not guaranteed that all of these will be involved in the RP, you should be comfortable with the following. Note, I'll list these from most likely to least likely, but be prepared for all of them: Adultery/Cheating, Incest, Obsession/Stalking, Nonconsensual Scenes, Drug Use, Kidnapping, Character Death.

For the -most- part we will each only be playing one character at a time. However, there will be times where one or both of us will be playing multiple characters at once, each of whom are doing their own separate thing. I'm not just talking about an instance in which multiple characters are involved in a conversation, I am talking about situations like you playing a character who is with my character while also playing three other characters who are each doing their own separate thing in a different place. This will be EXTREMELY rare and not the norm, but just know that I expect you to be capable of doing this, as I will do so myself if the need arises.

This is a heavily smut focused RP with at least 50/50 smut/story. So if you're looking to go into this for a purely story focused writing experience, well, to quote a giant gargoyle who once blocked a red squirrel from crossing a bridge because he had only just gotten comfy... you can think again.