Came to write, potentially. Still feeling things out.
More used to doing lines with a single partner, so you can find me lurking the 1x1 section.

In Shaman King: Darkstars → 14 days ago Forum: Casual Roleplay
It was days after the false comet has sailed across the sky that Fata appeared in the territory of the Patch tribe. She'd never been outside of her home continent before, and she was fully intending to get the most of sight-seeing... but that could come later. She did have a job to do after all, a duty to fulfill. Before leaving Africa she'd conferred with the spirits of the ancestors that had made their pact with the Patch in the first place, so she had at least some idea of what they looked like and where they could be found. She approached the village, padding along the desert with her friend floating in orb form beside her. The heat was bearable thanks to that, given the spirit's naturally radiating coolness.

Her preparations hadn't been much. She had the basics, her mediums, and not much else. She expected the Patch to be generous hosts for whatever mission they would be needing from her. Fata didn't yet know what the summoning was for, only that it had happened. And, naturally, that it was important. She skipped the last few feet through the mountainous pass.

Whether she was the first or the last of the illustrious "Darkstars" to arrive didn't matter to her. She smiled at the men who greeted her at the fringes of the village, looking up at them due to her stature being on the smaller side.

"Your chieftess summons me," she informed them, showing her pearly white teeth. The two men looked at each other, and seemed to put two and two together after a few seconds.

"You are one of the Darkstars?" The wider of the two watchmen asked, to which Fata nodded animatedly.

"Apparently. Now take me to her, to..." She clicked her tongue a few times, conjuring the woman's name from her recent memory. "Goldva. Goldva! I would discuss the circumstances with her."

The man jerked his chin in his chieftess' direction and turned to lead the way, leaving his partner at his post. Sango made a happy chirping sound, flitting around to take in the sights of the village. For her too it was the first time leaving her home, even in all her years of existing.
In Shaman King: Darkstars → 15 days ago Forum: Casual Roleplay
Excellent, then I'll get started on a post in the morn'.

And thank you Ben. I think we have a good mix of interesting characters so we will see how everything plays out.
In Shaman King: Darkstars → 16 days ago Forum: Casual Roleplay
Ah, seems I was last to post a sheet but it's complete now. Our only female too, which hopefully rounds off the cast nicely. There is a good spread already.

@TheNoCoKid So we await your approval on the characters, and once received we can get posting, correct?
In Shaman King: Darkstars → 16 days ago Forum: Casual Roleplay 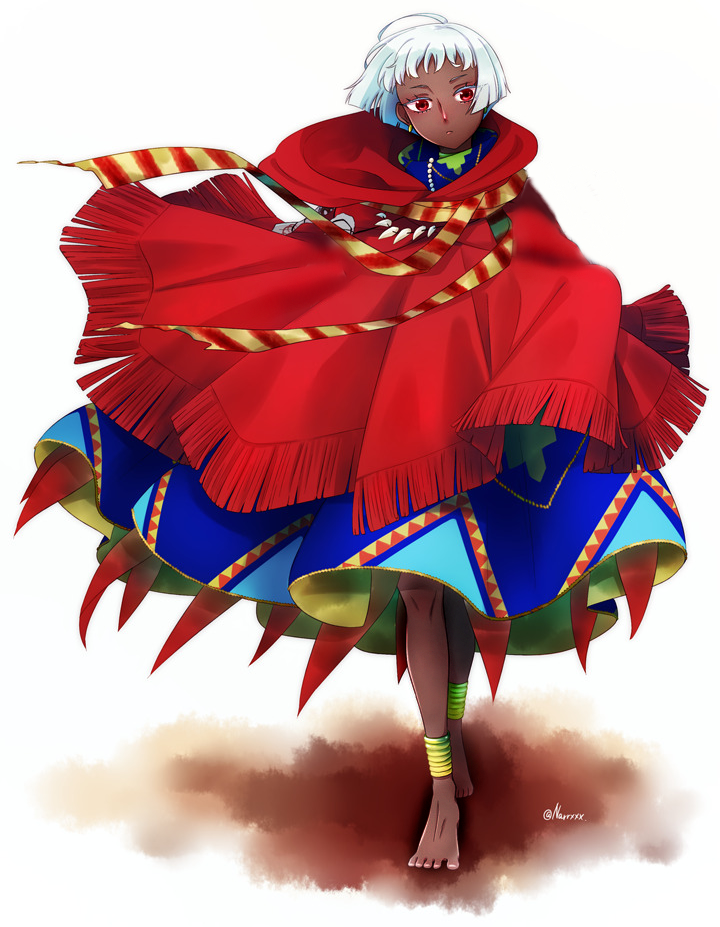 Guardian Spirit: Sango
A seirei-class spirit known as a Fangool, in this case a protective and sacred river entity. Sango takes the form of a large and colorful cobra, with a human-like chest and arms. She has a light-hearted personality, loves jokes and romance and is always willing to give others advice - whether they ask for it or not.

Spirit Medium: She uses two, depending on the Oversoul she summons. The first are anklets made from the clay of a riverbed. The second are capsules of various liquids that she keeps strapped to her person beneath her robes. Pangool are known as spirits that love offerings, and the liquids function as both offering and medium.

Oversouls:
Saloum River Serpent - Takes the form of a snake-like tail that envelopes Fata's legs and abdomen. It gives Fata incredible movement capabilities, being able to move swiftly as if swimming through water over ground and obstacles. The tail is flexible and able to wrap around people and objects as well, though that is not it's main purpose.

Split Arms: Ndepp and Loup - Tendrils that form around one or both of Fata's arms. They are capable of functioning as short-to-mid range whips, flails, maces, needles, and ropes - because they can easily change their shape to suite the situation. They are prehensile and capable of precise movements, and more than strong enough to lift things into the air. Depending on the type of liquid Fata uses as a medium, it will change the properties of the tendrils slightly. The most drastic of changes is in using blood as the medium, which significantly shortens the range of the tendrils but also gives them healing abilities.

Background:
Being the daughter of a tribal priest, Fata's future as a shaman was pre-determined. When she came of age and it was time to seek out a spirit partner for herself, Fata traveled the length of her country in order to bond with one of the Pangool that her culture revered. Eventually she found an ally and friend in Sango, a Fangool that happened to save Fata's life when a storm washed her into a river. They've been together ever since. The experiences Fata had while traveling became a part of her strength. When she returned home to continue her training, she proved to be adept at handling the flow of furyoku and spirit unity. This extends into her Oversouls as well, as what she lacks in strength she more than makes up for in speed, control, and fluidity. Years later when the green star sailed across the skies of Africa, Fata answered the call as the new high priestess of her people to fulfill that old promise between tribes.
In Shaman King: Darkstars → 18 days ago Forum: Casual Roleplay
My character is progressing well, worked out a solid idea and just finishing up some things including the hardest part: choosing names. Will be up before the weekend.
In Shaman King Roleplay? → 22 days ago Forum: Casual Interest Checks

Well he’s not a member of the Patch Tribe if you still wanna go that route, but that’s just semantics at this point.

Thanks, but I'm going to go in a different direction so no worries.
In Shaman King Roleplay? → 22 days ago Forum: Casual Interest Checks

Outside of the basic information… I’ll want to know who your guardian ghost is, what your medium/over soul is, and how skilled you are with it. Since most of the characters are already shamans, I’ll grant you one Over Soul V2 (I.e. Yoh’a second Amidamaru Over Soul) if you have one ghost, or two standard over souls of you want two ghosts. I already have a character of my own I’m putting in who is Native American so I’m just gonna snatch that up now.

Understood. And thanks for the heads up, I'll have to scrap my Patch idea and go with a back up. I'll get to working on it.
In Shaman King Roleplay? → 22 days ago Forum: Casual Interest Checks

Excellent. Is there any particular character sheet style you are looking for, or any information besides the obvious that you want included in a character sheet? And with no posts in the OOC tab, I wanted to make sure it was alright to post there.
In Shaman King Roleplay? → 27 days ago Forum: Casual Interest Checks

I don't know about the rest of you, but I'm ready!

Out of curiosity what do you have in mind?

For me, I have some ideas for a Patch tribe member. Or possibly an African or Russian shaman.
In Shaman King Roleplay? → 29 days ago Forum: Casual Interest Checks

So, I did some thinking and here's the idea I settled on. Because most of the Shaman World knows of Hao Asakura and the crimes he committed, there is obviously a taboo about those vying for power like his. The idea for the rp would be there's another shaman who is amassing power like Hao and a group is created to stop this shaman before he becomes too big of a threat? I think it would be cool if the group featured a shaman from each of the major continents like in the manga. (I.e. an American Shaman/Patch Tribe, Japan, China, African Shaman, etc.) If you guys have some cool ideas for this rp as well, feel free to put them on the forum and let's see if we can get something going!