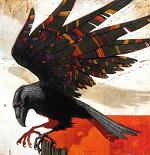 That said, why take a knife with you hunting? Try to shank something to death? I like how you listed which gobbos are doing what, the underline thing is also nice.

Finally, they ended up in a woodland clearing, safe – for now. “Alright, everyone, my group and I are going to take a look around. We’re taking a bow and arrows, spear, and a couple of knives for now,” Mint announced. With their limited tools and supplies, arranging who used which tool when could be quite the hassle, honestly. Generally, they were able to agree on short-term use by any one groups or individual, though, since they all had survival in mind. A common goal; Mint did not delude herself that such a state would be everlasting, however. But such considerations were for later; right now, they needed to get the bare bones basics down.

“We’ll pair up; Paran, you’re with me. Vari and Olom, you two go together and take the weapon. First things first, we need to find out as much about the area we can. Sources of water, food, the works. If you can, get some supplies. Hunt some small game, if you can,” this last was addressed to Vari and Olom. “The two of will also try to gather some herbs. Paran, you’ll have to be on the lookout for anything useful, since I’m not good at recognizing plants,” she said. “Any questions?” she looked at her group as she asked.

“Not more than a couple hundred paces or so, right?” Vari sought to confirm.

“Yep, that should work. If you sense anything too dangerous, though, retreat. If there’s an emergency, give a whistle, you know the one,” Mint answered.

Then, with the matter settled, the four goblins departed from the clearing, each pair in another direction. Mint and Paran headed north and would circle to the west after a while, while Vari and Olom headed south and would eventually switch to the east. For their pair, Mint took the lead, eyeing the most optimal path, with the aim to get a general outlook of the forest. She trusted Paran to seek out any herbs. For the other pair, Vari was the lead and carried the knife, while Olom would search for any small game.