Sociopath With Your Number

STATUS: Thinking is hard. 1 yr ago 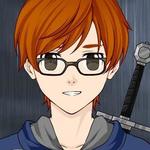 You know the whole song and dance, I'm Eric, not really though, and I'm that one anti-social shy guy with a decent sense of humor and a love for Roleplays, stories, and all that good stuff. I honestly spend more time here then I should, but real life sucks, we all know that.

Although I can get behind just about any kind of roleplay, I have a passion for horror themed ones, but honestly, anything is fun.

My characters aren't the most amazing, original, or even interesting, most of them are pretty standard, thankfully I try to avoid the Mary/Gary sues when building characters.

I give it a good ol thumbs up.
In Skyline Academy (Academy of Heroes) → 1 yr ago Forum: Casual Roleplay
Adam Hill

"Considering it dissolves stones and possibly thicker and more sturdy objects, I most certainly agree. The amount of acidity in the air has likely increased." His keen eyes had already moved towards the light of the hologram projector, his interest quite peaked. Adam wasn't clueless about technology, but holographic devices were still an unknown to him. Well, mostly, he understood the basic premise, but at some point he figured he'd ask the professors if he could take one of the devices apart and see what exactly made it tick.

"You've had something ramming against the interior of your mouth for quite some time, so feel free to spit it out, unless it's more of your acidic breath." He paused for a moment, quite unsure if he'd been joking about that or not, being as he'd never really made a joke before. Seemed more like an actual concern, but it could be taken as a joke. His brain began formulating which was more likely, or if they had a probability of being perceived as both, so he honestly just looked like he'd spaced out for a moment.

If you fish out whatever it is, I'll be waiting to hear it." When the hell had he started using weird phrases? Recently. He probably picked them up from the party at some point and forgotten.

@Raptra
In Skyline Academy (Academy of Heroes) → 1 yr ago Forum: Casual Roleplay
@Raptra Working on it. Should have something soon. ^^
In Containment Field [High Casual] → 1 yr ago Forum: Casual Roleplay
Hello! Interested peaked! Since there only seems to be one spot left open currently, the Communications and Operations Manager, I'd like to apply for that position possibly?

I can make a character sheet right quick. ^^
In Resident Evil/Walking Dead/Zombie Apocalypse → 1 yr ago Forum: Advanced Interest Checks
I heard Resident Evil, do I need to get out the Goop Juice and some herbs!?
In Vivid Recollections Season 2: Into The False Light (Urban-Fantasy, Cosmic-Horror, Mystery Thriller!) → 1 yr ago Forum: Casual Roleplay
St. Mercer Hospital
@Ruler Inc

"I'll explain on the way, this town used to be such a peaceful place, well I mean, it smells like cow and a hobo who hasn't showered in over a year, but at least people were normal." Charlie's finger twisted through a lock of their hair, curling it around their finger, trying to think for a moment. So there was a monster of some sort? Monsters exist apparently? Wait they might die!?

Charlie had to blink a few times at that, their brain continuing to slowly process what was being said and what the bloody HELL was going on. This was exactly like a movie, but it was real, movies didn't really happen, they were meant for entertainment purposes. They were just kidding right?

That's when they made the glowing ball. No CGI effects could compare to seeing a glowing ball of energy form right in front of your eyes. It...it was beautiful. At the same time though, it was also kind of terrifying. For a moment, just a moment, Charlie felt the true weight of the world crashing down around them, as they realized how small they were, and how much more life was. How any of this was possible, Charlie was yet to know, but they did know that the woman before them, Britney, had some kind of power that didn't exist in real life, and that was FRICKIN cool.

Leaning forward, the blond headed individual peered down at glowing orb cupped between Britney's hands, eyes filled with what could only be described as awe, horror, fascination, and a mix of so many other emotions that Charlie could have passed a horror movie audition for the stupid protagonist with flying colors. Either that or an Indianna Jones remake.

"I got way to many questions, but you did say we gotta get a move on or we might..." Charlie trailed into an ominous voice, "Die."

Perking back up, they hopped back a step, and took a glance around the hallway. "Where're we going exactly?"
In X-Men: The New Era → 1 yr ago Forum: Casual Roleplay
Jason Green


"The throbbing in my head is a little to loud for you to not be one of us." Moving his hood back over his eyes, allowing his bangs and the natural shadow cloak his face again, Jason's eyes peered out like little headlights from a train in a dark tunnel. His hands had naturally gravitated back into his hoodie's pockets, almost as if his hands were unable to handle direct contact with the air outside for long. Maybe he was just flustered and trying to hide his emotions, maybe it was just natural instinct, or maybe he was hiding an oversized mechanical nuclear powered triple barreled automatic bulletproof chainsword shotgun in his pocket? No that would just be silly and impractical, it was probably the latter.

"Heidi and Aya both give off their own presence, but it doesn't just stop at them, I also detect the same kind of presence from you, and considering none of my fellow students would need to state the things mentioned in the message as they've already found each other, and whatever's in the bar probably being of to much of a lesser intelligence to be able to even be capable of rational thought, that leaves you."

Although it was difficult to tell from the lighting, Jason could've sworn he saw Heidi...blush, a few moments ago? Wait what? He certainly hadn't been expecting that much out of her, then again, he'd completely forgotten about their "Date" until just this moment. Bloody hell. He mentally punched himself, accidentally floating a small stone that had laid upon the pavement nearby, and smacking himself across the face with it.

He hadn't really meant to do that, but mentally swatting yourself sometimes had consequences, most often ending with amusing results. Rubbing his cheek, Jason made an attempt to pretend nothing had just happened, and promptly failed when he was jolted by Aya's sudden awakening.

"Well then, that must have been a rude awakening." Chuckling to himself, the hooded young man moved closer to his friend, placing a hand gently upon her forehead in an attempt to snap her out of her stupor.

His eyes flicked back to Ayel for a moment, scoffing in a joking manner, "Gardener."

He'd never seen Aya look so out of it before, she almost looked like she'd just been spun around on a Merry-Go-Round a few to many times at high speeds, and he was honestly glad she wasn't standing up. Jason didn't have much information on Una, but he did know she had some sort of dream walking ability, so perhaps they had been in some sort of psychic conversation and that's why Aya had been so out of it? Either that or Aya had drank a little to much and was having fantasies about herself and Una.

The real question was...what the hell was Nocturn?

Jason turned to Heidi, the question already forming on his lips. "Any idea what or where Nocturn is?"
In Vivid Recollections Season 2: Into The False Light (Urban-Fantasy, Cosmic-Horror, Mystery Thriller!) → 1 yr ago Forum: Casual Roleplay
@MagratheanWhale@Ruler Inc Complete strangers for now is fine with me, as the Whale said, it'll make for some interesting interaction. ^^
In X-Men: The New Era → 1 yr ago Forum: Casual Roleplay
Jason Green


He wasn't standing there a moment ago, but Jason was getting quite good at moving silently, without much thought at all. His mind was either so jumbled that even he got confused at times by it, or it was just white noise, almost impossible to detect. White noise was what his mind had been, at least until he'd heard the part about "beauty."

A few short minutes ago, he'd still been directly outside the club, brooding to himself, when the message had barreled through his mangled mess of thought processes, and called out over his own mind. A message to all other mutants, to forge a path forward together:

"To the lonely souls lost in the world, to the forsaken and depressed. Do not be afraid, there is no need to cry, no more need to run away or hide. I am one of you, you not alone. We are the chosen ones, the ones whom are currently being oppressed. Where we are forced to hide from sight, where we are called freaks and monsters. We are not monsters my brothers and sisters, we are a different branch of mankind. So I urge you to leave where you are hiding, find others like yourselves out there. Tomorrow I will guide you to where we can all meet. Under a new light. A beacon to guide us to the future which is waiting for us. Seek love and passion, and go forth... with my prayer."

Shortly after, everything went crazy.

The interior of the club suddenly erupted with shouts, gunfire, and roars that no human was capable of making, followed shortly by the sounds of his comrades engaging it. Jason was about to slip back into the club to take a look for himself, and maybe, if he was in the mood, assist them. That was before he noticed a familiar face being carried, unconscious, out of the club by an individual he didn't recognize, followed promptly after by another individual that had briefly faded in and out of his mind in the past few minutes. This definitely warranted an investigation.

He stood still, watching them while they conversed, trying to gauge the situation before he leapt in. Heidi had followed the guy, and seemed to be having a pleasant conversation with him, and from what he could hear, Aya was going to be fine, well, mostly. He was sponging up the information, up until he heard the one singular word that warranted him finally stepping into the open.

Jason stepped out of the shadows, his red eyes peering out from under his hood, his hands in his rather comfortable pockets, attempting to smile cheerfully. He was failing, miserably. His X-Factor was still going off, not just for his two friends, but the stranger as well. There was no doubt now, whoever they were was indeed another mutant.

"I can assume you have something to do with the message that was broadcasted into my head, not so sure about if your responsible for whatever the hell's happening in there..." He jabbed a thumb back towards in the direction of the club. "But, that's not why I'm here, I had an urge to check on my friends, and to make sure you weren't trying anything."

Jason moved closer, pushing his hood away just enough for his peepers to have a better line of sight. "I'm glad you weren't, I was feeling lazy tonight, and the man hole cover over there is doing it's job so well."

Jason was never the kind to throw the first punch, not that he would've attempted to punch anything anyways, there were far heavier things in proximity then his fists, it was an attempt at a bad joke.

Maybe he should work on new material. God he wasn't good at this.