The Shadow of Heros

STATUS: Really sick of being lied to and vanished on… 8 mos ago 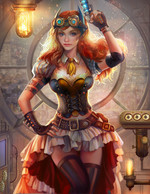 8 mos ago
Current Really sick of being lied to and vanished on…
7 likes
8 mos ago
Wondering what is the point anymore.
8 mos ago
Starting to think I don’t belong here anymore…
9 mos ago
Well…more people vanish out of the blue. Starting to wonder if it’s me that’s causing stories to die off.
4 likes
1 yr ago
Well what turned into my kiddo being sick turned into me getting the stomach flu. Thank you to all of my partners for being patient in waiting for my posts. It took me a few days to bounce back fully.
1 like

I am Megara Foxfire and I have been on the site for around 11 years now, old site then the new site. I am married to a wonderful man who makes me happy every day and I am a interior designer. I am at home with our daughter and son and I love to write to pass my time when I'm not cleaning my house or doing other wife things.

I love doing 1X1 role-plays and I love using thread or pms. I either go off my interest thread, which I have one that is more updated going or I have a list of characters that I am working on to base plots on. If you are interested in being partners just PM me and I'll talk with ya on ideas. I write causal, sometimes higher if the story grabs me.

I am up for anything as long as it doesn’t include kids or hurting kids or abusing them. I’m a mom so I don’t do well with it.

In I am the fire - Constantine RP → 1 day ago Forum: 1x1 Roleplay
Serena smiled and moved to kiss his cheek. “Thank you Josh…your the bet you know that?” Bane moved over to lay in front of them, looking clearly worn from his fight and captivity.

John turned and saw manny, then nodded. “Thank you for the advice Manny…and for all you do. I’m starting to see things aren’t as easy for you as it seems…thank you for protecting these kids in the future”
In I am the fire - Constantine RP → 3 days ago Forum: 1x1 Roleplay
John looked at them and said “he wouldn’t come even if I asked nicely. It’s against the rules for him to interfere. But…” he looked up and said “a sign or word on someone we could ask for help would be greatly appreciated? Please Manny…this kid just saved the future…”

Serena held Josh’s hand and said “can you help me over to Drake?”
In I am the fire - Constantine RP → 3 days ago Forum: 1x1 Roleplay
John nodded and said “problem is…I don’t know how to call him…and normally does not do me favors…” he rubbed his neck and Serena said “well let’s get Drake fixed up as much as we can and then figure out what to do…”

Drake smiled weakly at Fia and said “I’ll try…”
In I am the fire - Constantine RP → 4 days ago Forum: 1x1 Roleplay
Drake nodded as Fia walked in, not seeing her do so. “I snapped at her…she didn’t deserve that…I just didn’t want to get her hurt again because of my mistake…I told her I’d get Bane back here in one piece…so I had to…”

John was tapping his fingers on his arm thinking then said “I’m not an expert in the healing arts…but there might be someone who can…if his willing to help. Manny. He might be able to heal drakes core enough that fia can jump in or…tell us who can heal a soul core. This is the holy magics. Church and heaven stuff…”
In I am the fire - Constantine RP → 6 days ago Forum: 1x1 Roleplay
Serena looked at John as he was checking Drake over. “What can we do for him? Won’t fia or Kay healing be the best action?” John shook his head as he glanced over.

“Normally, yes. But this…that demon damaged Drakes soul core. Magic healing it is much harder and with both of their types…the core would just pull their power from them without fixing it. It’s a black hole right now. We have to repair the core and get it stable then healing can happen”

Drake lowered his head and muttered “I’m sorry Fia…”
In I am the fire - Constantine RP → 8 days ago Forum: 1x1 Roleplay
John looked at josh and said “it seems that her father wasn’t just a vessel…he might have been the real thing. A real god. Which means…crap. This would explain a few things”

Drake ripped her hands from his side, his eyes flashing silver as he growled “leave it be. For once just leave it alone” he flinched and lowered his head, shaking worse. John looked over and saw him and froze. “Fia…listen to him. His more hurt then you can heal…” he got up and moved to Drake, making the boy look at him.

“The demon hit you didn’t he? He was digging for Bane?” Drake nodded and muttered “he was trying to rip him from my core…I moved bane In time but…he hit me…” John frowned and looked at Kay then Serena who was trying to sit up. “Kay…don’t let anyone try and heal him. Not like this…this is more then any of us can fix…”
In I am the fire - Constantine RP → 9 days ago Forum: 1x1 Roleplay
Serena blinked, still out of it then the memory hit her. “Father…I saw him. I felt him there in the building before the bomb was about to blow…” she held her head as John said “seems there was more your background then we thought…something to look into…”

Drake was looking down, holding his head as he was trying to hide the pain he truly was in. He was hiding the bigger part of the fight. He didn’t want to worry them. He held his side, praying that Fia didn’t notice just how deep the wound had gone.

Bane was watching Drake, worry in his eyes. Trish moved to Chas and pulled his sleeve. “Drake isn’t okay…I sense something is wrong…his aura isn’t right.”
In I am the fire - Constantine RP → 9 days ago Forum: 1x1 Roleplay
Serena groaned weakly and opened her eyes, looking around. “What…Kay…she fell…I have to get her out…” John moved over and said “easy love, everyone is alright. Your a little behind…”

Serena blinked and saw Josh and said “oh no…I promised I would be okay…”
In I am the fire - Constantine RP → 10 days ago Forum: 1x1 Roleplay
Bane shook his head and said “I don’t think it was a mistake…I believe this is how it was meant to happen. By saving Kay from the darkness that was aiming for them both, Serena unlocked the gifts needed to keep doing her job. I sensed her fathers soul in there…something is up I’m sure of it”

Serena suddenly groaned softly and fought to open her eyes and muttered “Kay…have to get…her out…bomb going…”
In I am the fire - Constantine RP → 13 days ago Forum: 1x1 Roleplay
Drake sighed and shook his head. “No save your energy…I’ll be fine…I’m worried about mom. What the heck happened to her in there?” Bane walked over and sat by Serena who was slowly coming around.