STATUS: Better to be a coward for a minute than dead for the rest of your life 1 mo ago

1 mo ago
Current Better to be a coward for a minute than dead for the rest of your life
7 likes
1 mo ago
I think giving plots in 1x1s is kind of a waste. If I'm looking to write a 1x1 I want to be a full partner in coming up with the plot.
5 likes
1 mo ago
What do you mean 'not allowed' it is your RP just write whatever you want.
2 likes
2 mos ago
Goddess help me but I read that as 'culling' dogs
4 likes
2 mos ago
I wanted to hate it, but wow, Squid Game was AWESOME
1 like

Early 30's. I know just enough about everything to be dangerous.

In Penny's Pencils → 20 days ago Forum: The Gallery 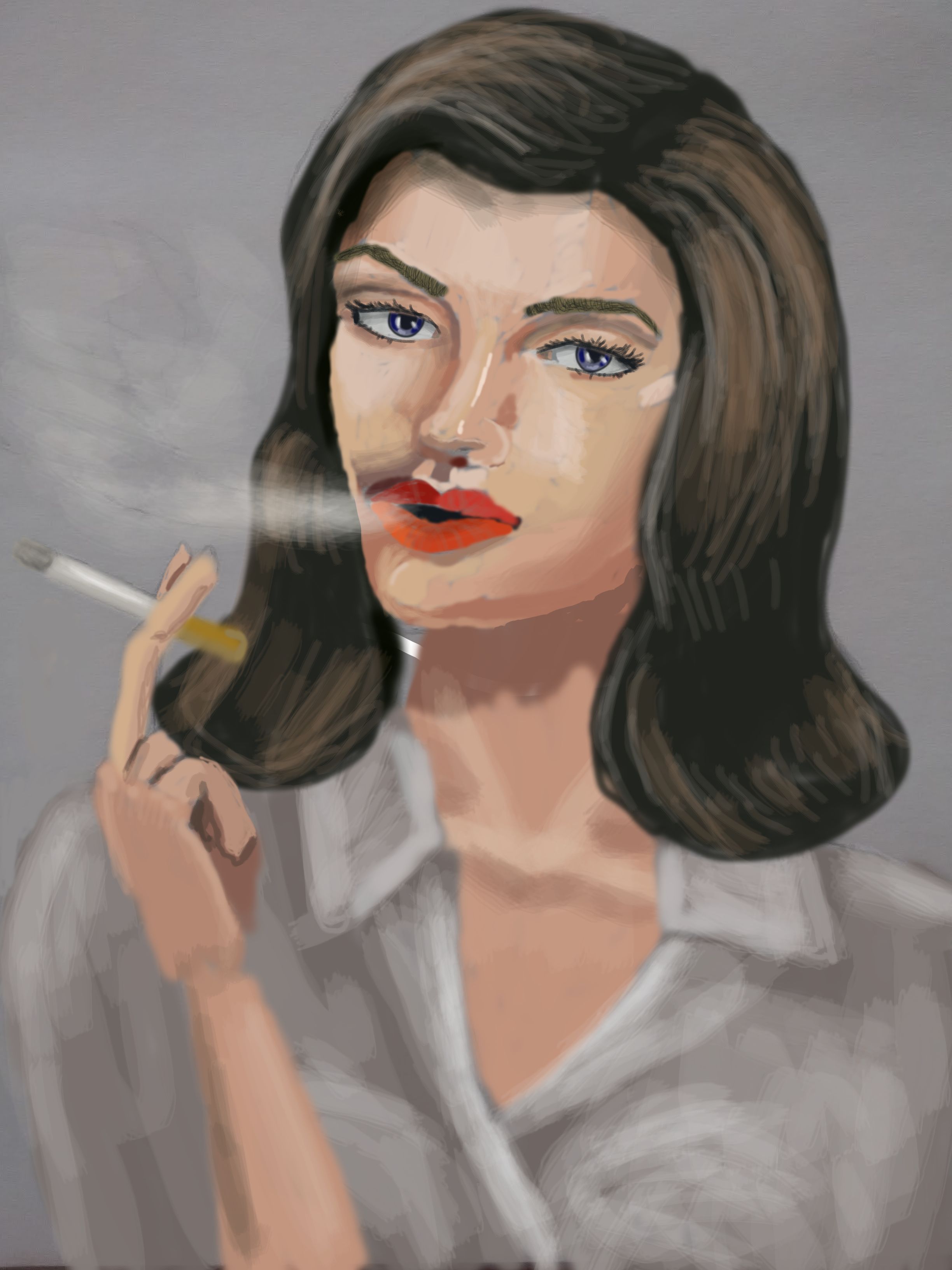 In Penny's Pencils → 22 days ago Forum: The Gallery 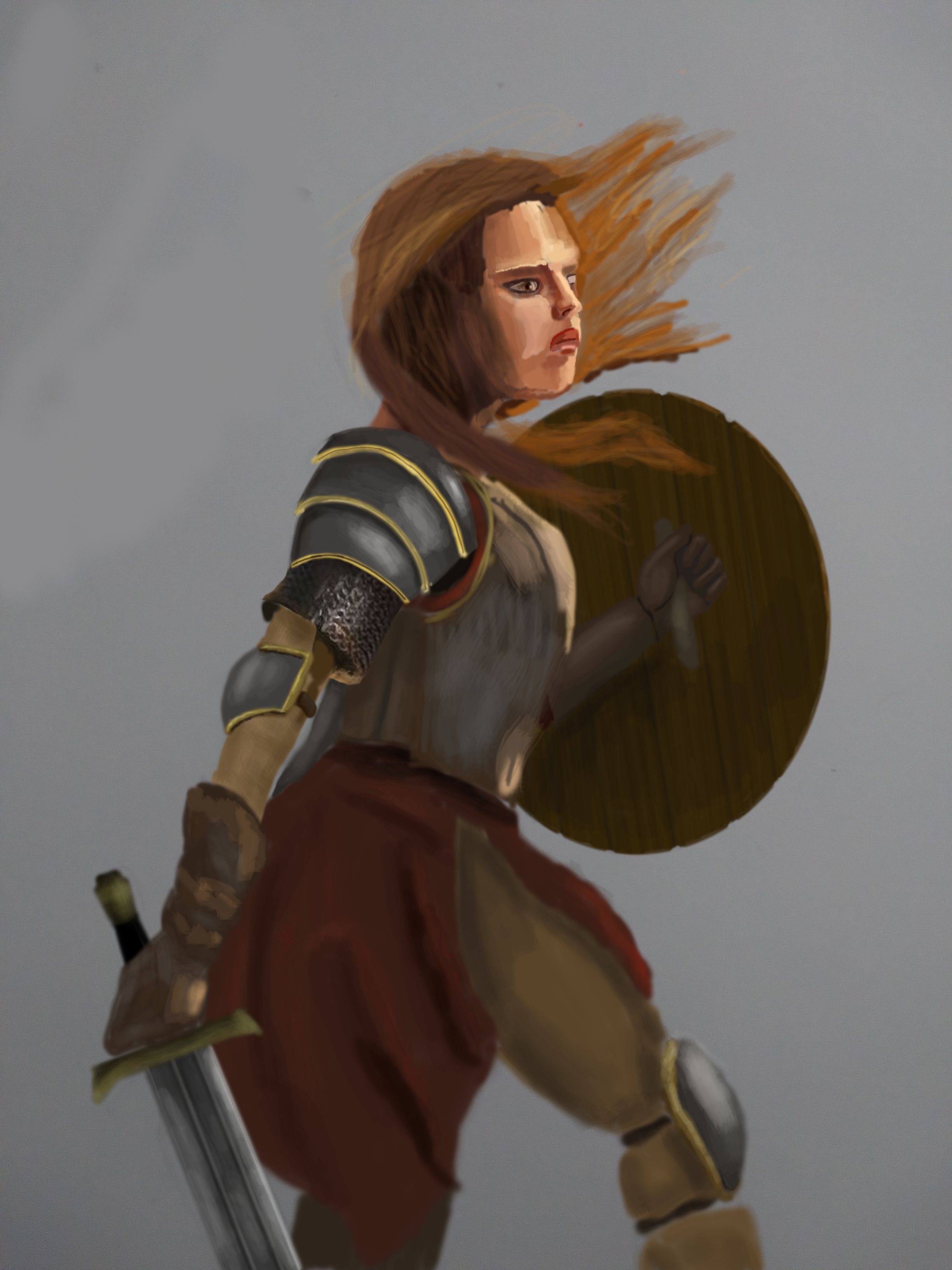 In Blades of the Blood Coast → 22 days ago Forum: Advanced Roleplay
Emmaline finished the bandage and tied it off in a surprisingly neat knot. She drumbed her fingers on Beren's arm oblivious to the fact his arm was wounded. There had been a fair amount of talk about the clamity, but it seemed unlikely that they simply attacked the inn at random. Still, if Beren and the rest of them were determined to play innocent a direct approach wasn't likely to work.

"I'll feel much safer with an obviously injured bodyguard," Emmaline said but her heart really wasn't in it.

"I'll bet that at the very least a Sultana in exile has some gold put by," Emmaline mused. The idea of gold briefly made her drift off into a pleasant fantasy of clinking metal. The snap of Beren's fingers infront of her face brought her back to reality.

"What is the worst thing that could happen if we asked around," Emmaline pondered. Probably rather alot, given the Sultana was presumably on the run but Emmaline's eyes were clouded with the idea of gold. At the very least they might get some info about what was going on in the city. 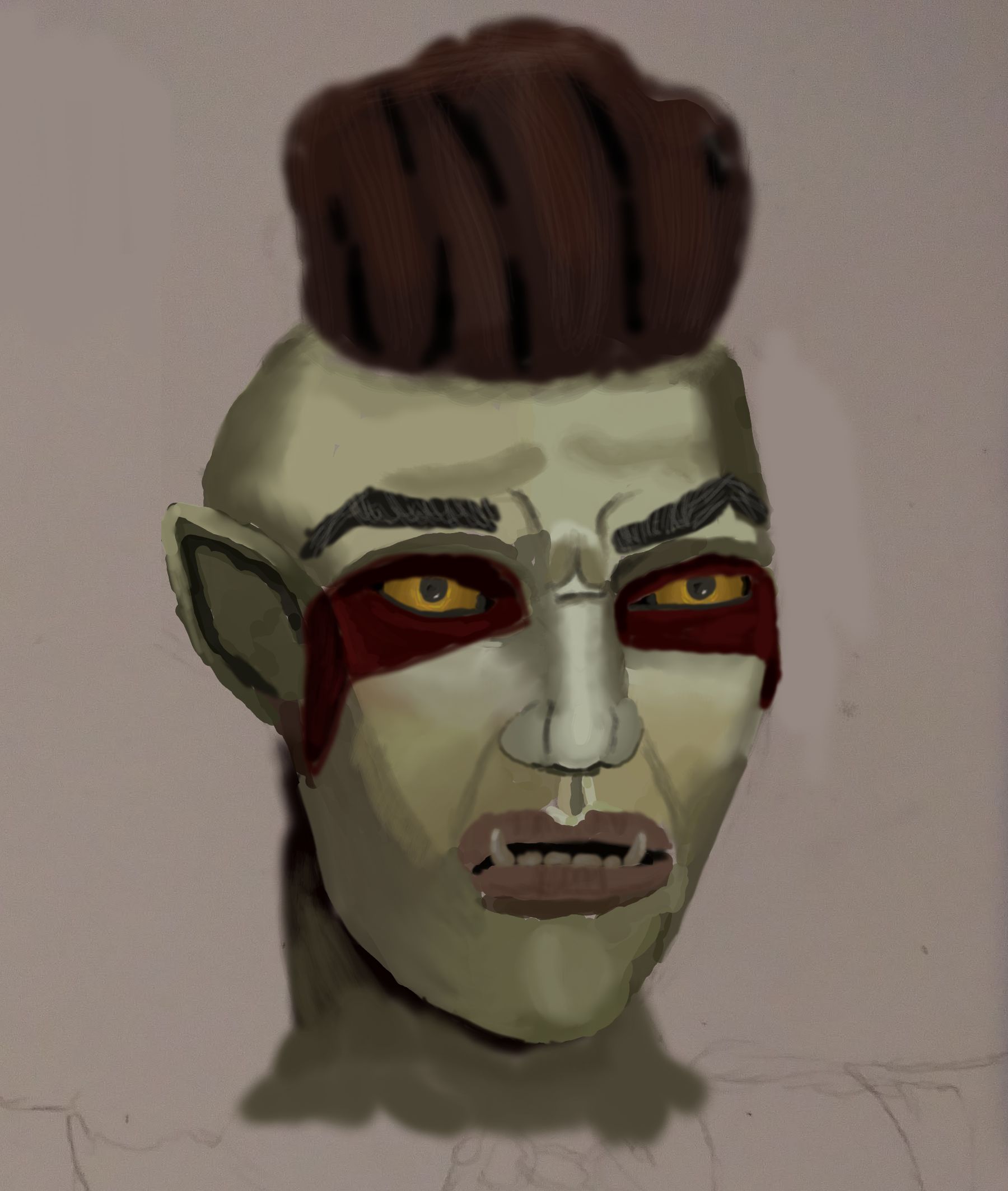 In Tales of Tamriel → 24 days ago Forum: 1x1 Roleplay
"I suppose that excludes laying down arms and surrendering to Imperial justice?" Kris put in, cursing herself for her stubborn streak. Ulfric boomed a laugh that was quickly taken up by his hangers on.

"You are a bold one Breton. Anything within reason I should have said," Ulfric replied, he was still smiling but a slight chill in his eyes told Kris that she was pressing her luck further than she should. Ordinarily that might not have stopped her, but a sideways glance from Dax reminded her that it might not be her head alone that she was putting on the block. Nothing in all the world was do vile as a traitor, and petty would be tyrants who would rather carve up the Empire than stand against the Thalmor made her insides burn with bile and contempt. With a visible effort she managed to control herself.

"There is a village along the river that serves as border between Windhelm and Whiterun," Ulfric continued, clearly taking her silence for agreement, however reluctant. Hammerstone they call it, for the old mines in the hills. Something is terrorizing the villagers there. I cannot send my soldiers without Jarl Balgruuf interpreting it as an attack, and I suspect he feel similarly constrained." Kris' knowledge of Skyrim was scanty but she seemed to recall that the center and south of the country were its agricultural heartland. Moving against Whiterun, already a powerful Jarldom, would bring a swift response from the Imperial Legion at Solitude and do so on terrain that was greatly to the Imperial's advantage. Ulfric's Stormcloaks were at their strongest in rugged terrain like that around Windhelm and would suffer on the plains. Further more such an attack would force the Jarl's to choose sides in the nascent civil war. Something Ulfric clearly wasn't ready for. His best bet of disloging the Imperial garrison at Solitude was to sway enough of the country to his cause that they couldn't manuever without opening up their supply lines to attack. That still wouldn't get the Legion out of Solitude, but Kris suspected that the Thalmor would be happy to foment trouble elsewhere to help Ulfric realize his petty ambitions at great cost to the Empire.

"I need strong blades who will do what is best for the people, and I am willing to pay handsomely."
In Penny's Pencils → 25 days ago Forum: The Gallery 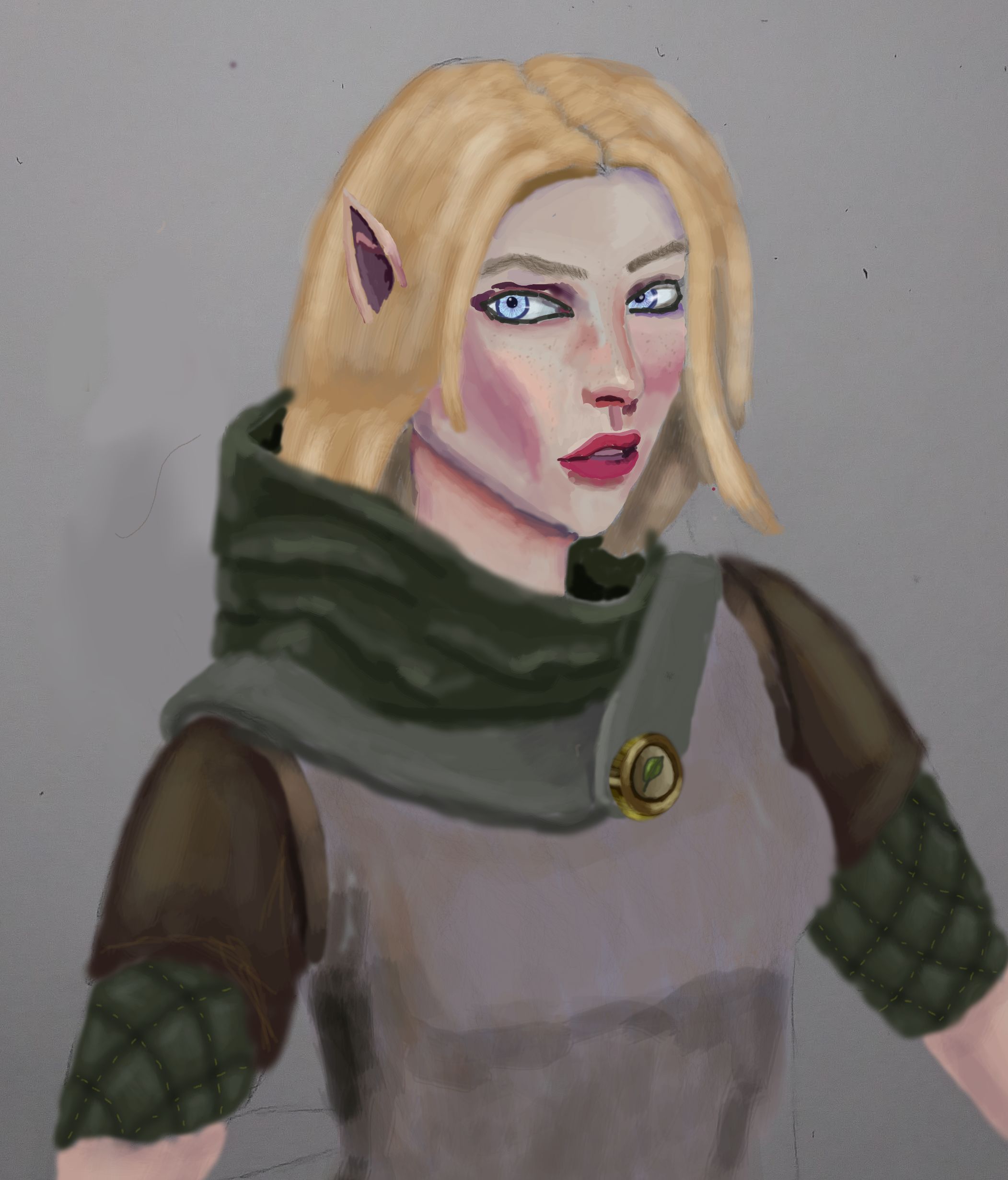 In Tales of Tamriel → 26 days ago Forum: 1x1 Roleplay
Ulfric's eyes shifted too Kris, who would have just as soon he kept his attention on Dax. It had been several years since she had officially been part of the Legion but her leather armor and equipment were obvious marks of that affiliation. The Yarl's eyes were cool and glacier blue as he looked at her and a murmur ran through the court.

"Greetings Landstrider," Ulfric said with a touch of humor to his voice.

"Ulfric," Kris responded with deliberate informality. It was foolish in the extreme she knew and in her mind she had prepared herself to bow and scrape, but now that she was here she found herself unable to follow through on such a sensible plan. Silently she prayed that it didn't splash back on Dax.

"That is Yarl Ulfric!" one of the henchmen spat.

"I'm pretty sure they strip you of your titles once you murder your king," Kris responded. The hall erupted in angry shouts and there was a general scraping of weapons clearing scabbards. Kris didn't reach for her own weapon, if they decided to kill her there wasn't much she was going to do about it with her sword.

"SILENCE!" Ulfric shouted, and it was more than mere words, it struck like a gale and rattled the stones like the blast of a great wind. In the wake of the command a quiet so profound that Kris could feel her heart beating fell over the room.

"This woman is a guest in my hall... even if she chooses to be discourteous," Ulfric continued in a regular speaking voice.

"And you are mistaken Breton, they don't strip Jarls of titles for killing a man in a fair duel," Ulfric replied in a tone that suggested he had made the remark many times in the past. Kris shrugged her shoulders.

"Must have been for the rebellion then," she added, getting more angry grumbles from the hangers on.

"You were in the Legion I see," Ulfric said, changing the topic.

"I was with the Tenth, back during the war," Kris admitted, casting her eyes to the side at the glares she was receiving. It would have been a very good idea to take the olive branch that was being offered, but once again she found she couldn't. How was Ulfric any different from the man she had hunted for betraying his comrades?

"And Mer as well," Kris put in stubbornly. This time Ulfric didn't bother to respond, he just gave her a look that invited her to go on if she had more to say.

"Are you with the Empire now Legionnaire? Are you spying for Tullius?" Ulfric asked, sounding like a cat playing with a mouse.

"I'm just a pensioner," Kris replied, managing to reign in her tongue before it managed to put her in an early grave.

"Do you swear that by your ancestors?" Ulfric asked. Kris nodded glibbly.

"You bet," she replied sweetly.
In Blades of the Blood Coast → 27 days ago Forum: Advanced Roleplay
Emmaline took a bottle of grain liquor and poured some of it into the bowl of water Beren had brought, then she took a drink herself and set the clay bottle down. She took a length of clean cloth and dipped it into the now pungent water and began to sponge at Beren's wounds.

"Don't worry, I used to be a priestess," Emmaline lied glibly as she carefully worked the char and mess out of the wound with the stinging cloth. She certainly had never been any such thing, but she had stitched up enough people after bar fights, climbing accidents and other such mishaps that she had some idea how to manage the business.

"We really should salve it, if you have anything, otherwise it will weep everywhere until it crusts over," Emmaline expounded.

"I was going to ask you about this deposed Sultana, but I feel like that might be a little overshadowed by the fact that the inn was attacked by some kind of ravening half demon... I thought we might talk about that," she said a twinge acidly, pressing a little harder than was necessary to scrub the wound clean.

"I mean its a nice inn, but off all the inns in the city those things come here?" she arched an eyebrow in question

Deception - 6 Not really a priestess
In Thrilling Tales! → 28 days ago Forum: Advanced Roleplay 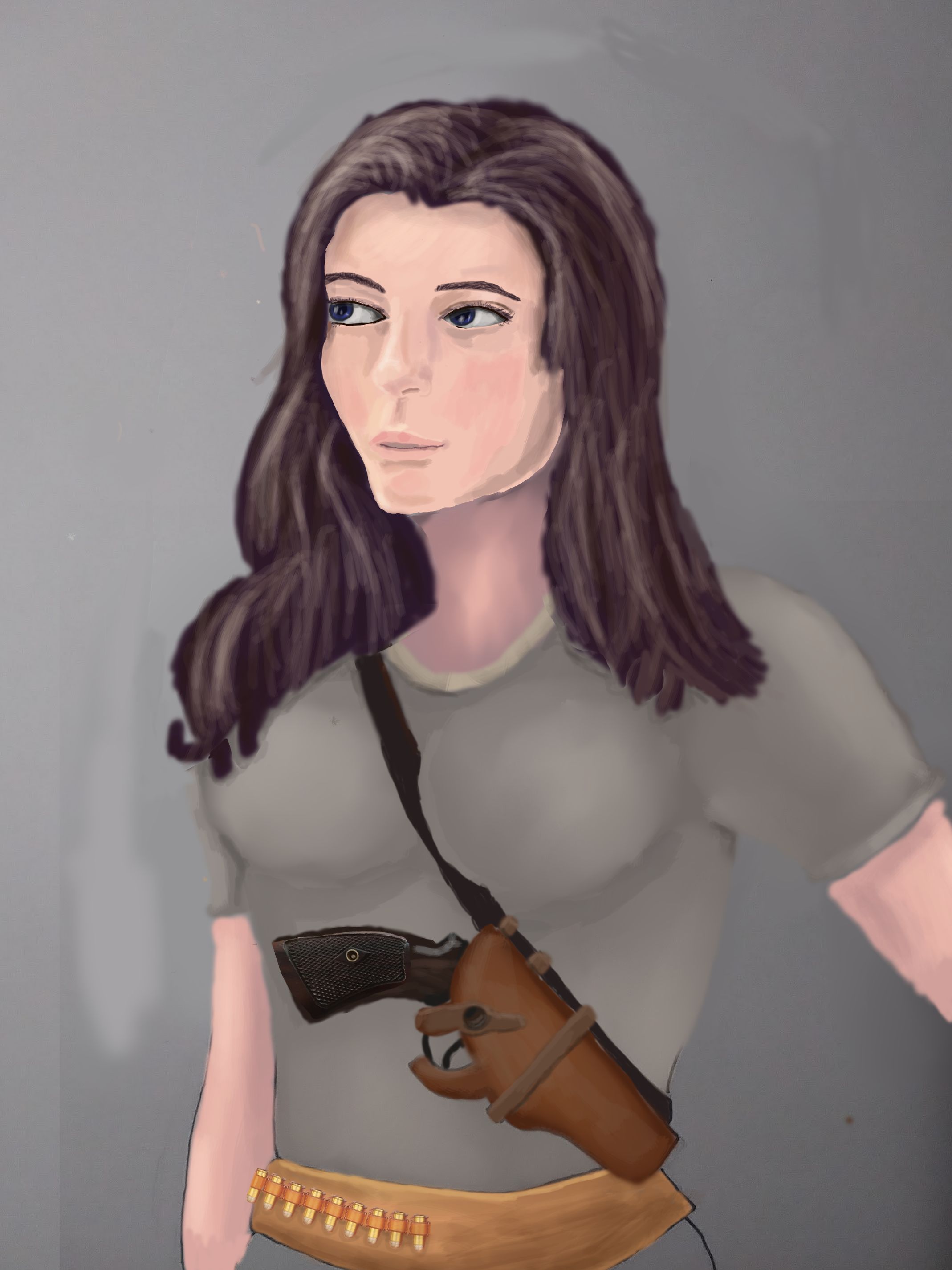 In Penny's Pencils → 28 days ago Forum: The Gallery