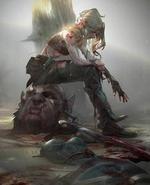 “Khorramshahr is Karbala. Every place in the world is Karbala, and every day is the day of the Battle of Karbala.”

In Hell is a poor place for ambitious women. (Now with personalized artwork!) → 1 day ago Forum: 1x1 Interest Checks
(This is a writing sample of mine and my expected level of skill from my partners. To move forward with me requires that you share something on the same level.)

Not orgasms nor the damning touch of the Queen of Hell's fingers as she pressed into you.

I've a dozen different ways I've written this prompt in the past accompanied with flowery exposition and storytelling that I feel never quite conveys the substance of what I'm looking for within it.

The simple and plain version of what I'm looking for is an individual whom would be interested in taking the role of a GM and embarking with me on a highly politicized story told through the lens of the antagonist of the world- a demon intent on taking over the world through military and financial conquest.

This demon is unlike most other villainesses however. Hers is not a mindless series of conquests and subjugation hellbent on reaping only destruction and misery in her wake; rather, she'd happily give prosperity and wealth to all her subjects in return for their fealty, but only for the fact that they remain stubbornly attached to their archaic ideas of hereditary monarchy and despot kings and queens. She's evil, of course. And capable of great atrocities, without a doubt. But the evil acts she commits are, as she sees them, necessary ones, and mustache-twirling villainy isn't something I intend to make the primary themes of this story.

Instead, rather than have our main character be a simpleton, wanton creature whose only objective is generic world conquest and whom is a monster of prophecy foretold through the legends- she's a bar wench.

Yes. The literal incarnation as the mortal realms see it is a tavern wench of a low-income background whom just so happens to be a talented administrator and wartime leader, a lesbian, and wishes to carry out governmental revolutionary change across all known universes- Heaven, Hell, and the mortal world between them.

If it weren't already obvious, this story carries with it a degree of satire and comedy to it. I find the cliches involving fantasy worldbuilding to be pretty dull and borderline degenerative at times - pretty girls playing tavern maids whose only purpose is to be eye candy, D-list background characters - hence our lady lead who you shall come to be know as Ilya.

Themes that I consider necessary (and with them a partner with a sufficient amateur or academic background to portray them properly) are espionage, economics/commerce/inflation/so on, military strategy, political science, and a decent grasp of history. This RP as I imagine it takes in a completely different universe than our own of no relationship to it, with its own cultures and characters and nations, but understanding our own reality is fairly crucial for creating a world wherein principles for ideas are shared.

My untouchable kinks are the usual bits. Blatant and unnegotiable sexual assault/non-con. Human waste. Tentacles. Feral breasts. You know the drill.
I've a handful of writing samples on my profile page and welcome any interested parties to throw me representations of their own writing, potential Discord accounts, as well as introductions of themselves.