STATUS: I have such fond memories of this place. I want so badly to get back into it, but where do I even start?.. 2 yrs ago

2 yrs ago
Current I have such fond memories of this place. I want so badly to get back into it, but where do I even start?..
3 likes

In Of Data and Code - A Digimon Story → 12 min ago Forum: Casual Roleplay
@Lord Orgasmo

Fair enough, but I didn't want to send an incomplete app and was in a rush to save my progress before leaving for work for the day. My apologies.

Pms are an acceptable way to store your WIP. Keep in mind if you don't want to send it to me right away that you can pm yourself. That's how I worked on this whole thing for a few days
In Of Data and Code - A Digimon Story → 15 min ago Forum: Casual Roleplay
Guys! Please pm your character sheets to me.
I've said this several times guys, come on.

@thenocokid@double
In Of Data and Code - A Digimon Story → 8 hrs ago Forum: Casual Roleplay
Ill give the precedence to those who come early, but being early is not the end all be all of getting accepted. Im growing very attached to this idea so I may be a bit choosy about some things.
In Its a Digiman Adventure ;) → 9 hrs ago Forum: Casual Interest Checks
@MissCapnCrunch@TheNoCoKid@Lord Orgasmo@Vertigo@Crimson Flame@Darkmoon Angel@metanoia@Dragonfly 9@Double@RBYDark

As promised you've all been tagged. I cant imagine ive missed anything else for OOC post, at this point Im pretty sure Im just over analyzing it. If you notice anything weird or have questions just ask me.

Of Data and Code - A Digimon Story


@G3njii I should have one ready soon. Has anyone picked a Leomon line? I wanted to see what's been taken before I applied.

Name: Aiden Merrick
Age: 17
Crest: Integrity
Personality: Patient. Imaginative. Yearns to connect with people on a true level, to be honest about himself. Strong sense of justice and a bit vindictive in relation to it. Warm and brotherly, tries to be gentle the way he needed as a kid.
Backstory: 10 years ago when Aiden was only 7 years old, he was part of a group of kids who found themselves lost in the digital world. This was when he received his digi-egg unlike the other chosen. Though his digi-egg did not hatch for many years, not until Aiden needed his digimon most.

See when Aiden returned to our world, his world was turned upside down. The kids disappearance had made the news, parents and teachers alike were accosted by the public, and when Aiden came home his parents defelcted their anger and blame onto him. It wasnt long before his parents split up and Aiden was bouncing from house to house, and of course his siblings blamed him for breaking the family up. His two brothers would regularly beat him when his parents weren't around and Aiden was made out to be a clumsy kid with all his bruises.
It was during this time, the egg he had been safe-guarding hatched, and he finally met Nyokimon. Nyokimon managed to keep Aiden's spirits high despite all he was going through.

Even when he wasn't at home though it was hard to escape the reminders of his life. His story had initally made the news and so to his peers he was this weird celebrity. Often they'd ask questions and Aiden learned to be patient, as he knew he couldn't tell the whole story. This helped him develop a knack for making up stories on the spot, but he also learned how much he wished he could be honest, to share it all. Because while he got a lot of attention from other kids, he felt alone, he felt unconnected to his peers, like he Nyokimon was the only one he had.

Aiden spent many years learning about computers and networking, in an attempt to make it back to the digital world. A place that represented the change in his life, the place that gave him Nyokimon, a place full of adventure away from everything in the real world. On that night two years ago when the digital world crossed back into ours, Aiden finally found a way to cross over, and that was the last time anyone had seen him.
Notes: 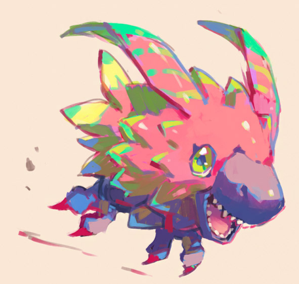 The Digital World
A huge realm that exists separate to the one in which humans live. In this huge, multifaceted world all things, all life, all existence is reduced to the form of data. Because of its nature, the existence of this world remains to be a mystery.

There are numerous variety of Digital Worlds, each rich and uniquely populated with life, serving as parallel worlds beside each other. These worlds are often organized into separate servers and domains, which abide by their own rules and histories, their own rulers and protectors.

When the Humans created the beginnings of the digital network, the natural borders between the worlds began to reorganize. As Humans proceeded to further the integration of digital technology with their lives and their world, the digital world became more deeply and stably connected to our world. Opening the door for monsters, people and phenomena to cross between the worlds.

Two years ago a notable crossing between the worlds occurred. When a new higher speed form of internet went active for the public the worlds crossed over in a way different than they had before. Though all that seemed to come of the crossing had been wild weather and the seven digimon eggs that were left behind in the care of seven children.

Witchelny
A unique server of the digital world known as the World of Medieval Magic. What makes Witchelny unique more so than its medieval setting is that here they developed the power of sorcery. Sorcery being a high level programming language that allows the users to manipulate data into 'magic'. In this world of castles and wizards there is a mountain at the center known as Brocken mountain. It is the home to the great school of sorcery founded by the four great clans of Witchelny.

In their history they were once defenseless to intruders and danger. It wasn't until their greatest hero, MedievalDukemon rose up and banished the invaders and began to police the realms borders. It was his teachings which led to the long term safeguarding of the realm and the prosperity of it's people. Looking back on their history and the vulnerability they suffered they chose to take it upon themselves to oversee and protect as many young servers as they could.

Hearthwell
A realm which was recently rebooted after a great war had left the world in ruins. Those ruins now overgrown with nature and eroded by the elements. The world moves on around them on sturdy fertile foundation thanks to the reboot.

This world while young, is still wild and dangerous. Much of the world is undeveloped and filled with monsters simply fighting for survival. Small pockets of community have begun to spring up through the world with few growing hubs for trade and travel. To make this life tougher the world as begun to experience instability in its data. Holes in the environment. Unpredictable weather. Digimon rampaging. The breakdown of natural laws.

Important Information
Multiple evolution possibilities. Expect me to add suggestions for extra forms alongside your primary line.
Human characters will be given means to participate in more ways than just coaching.
I will push diversity for chosen digimon. This also means that if there is a conflicting choice I will work to find you something you like and are happy with.
Reminder that this is supposed to be fun. We are here to write, relax, and nerd out. Respect that and each other.
I find the best digimon stories deal with heavy themes. Expect them. Real world heavy stories. Real monsters that impose real danger.
Message me your work and questions so we can keep some surprises for the adventure. :)

Keywords
Digivice
An invention with a twofold purpose, made for the children intended to be partnered with digimon. It is made to give these children an interface with which to interact with the data of the digital world and to link them to their digimon.

Digimentals(Armor Digi-Eggs)
Manifestations of the raw elements of the world in digi-eggs like form. Digimentals are said to both protect the user and foster the growth of new power.

Sorcery
A series of high level programming languages that allows the users to interact with and manipulate data into the use of 'magic'.

Crests
Talismans of old, powered by a lost language of sorcery. Capable of unlocking incredible but fleeting powers. Represented by virtues and ideals.

Send all applications to me directly in a PM.
See list above for available crests.

Name
(Image)
Age:12-17
Crest:
Personality: Your crest doesn't have to entirely determine your characters personality. Real people are more complicated than that.
Backstory: At some point 2 years ago, you were pulled aside into an empty plane. Here an entity with no body spoke to you. Addressing you by name they charge you with the protection of an egg. Stating that if you protect and care for the egg that someday it will return the favor in kind. Suddenly back in reality you find yourself in possession of a small melon-sized egg.
Notes:

Is there still room here for more players?

Just gotta see who puts in an application. If youre curious stick around
In Its a Digiman Adventure ;) → 20 hrs ago Forum: Casual Interest Checks
How would y'all feel about knowing your Digimon for a few years prior to the rp.
Like an egg was found in your home and you being a good person allowed it to hatch and bonded with the Digimon

This way it's a little less suspension of belief for the strong bond being there. As well as being able to have established behaviors relations and etc with the Digimon to begin with.

Or would y'all prefer to meet your Digimon for the first time in the rp itself and write through and that development. Let me know.
© 2007-2017
BBCode Cheatsheet