STATUS: When you are craving a cute slice of life/romance but everyone keep dropping off the face of the planet. -.- 3 mos ago 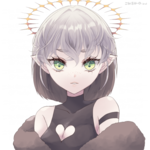 3 mos ago
Current When you are craving a cute slice of life/romance but everyone keep dropping off the face of the planet. -.-
7 likes
3 mos ago
Can like give me a damn break please...Every time I take one step forward I feel like I am pushed 12 steps backward and it's taking it's toll...
3 likes
7 mos ago
As a response to recent events within my country, I will not be participating in any “patriotic” events in the upcoming days.
3 likes
7 mos ago
This guy's got the right idea, he wore the brown pants.
2 likes
8 mos ago
Happy Pride Month to everyone! ^-^
7 likes

Oh fuck, I am so far behind

You aren't that far we were all just rolling our attack, ability, and saving throws and talking about ways to help eachother
In Adventure (A D&D 5E Game) → 13 days ago Forum: Tabletop Roleplay
Poo no special suprise but Jormund loses disadvantage :)

"Because of the strategic intelligence gathered from Hawk's spying, you get a +4 to all of your rolls."
In Adventure (A D&D 5E Game) → 13 days ago Forum: Tabletop Roleplay
Hehe this is going to go well XD

Will edit rolls in a moment.

Oh! Does Hawk get the +4 also?
In Adventure (A D&D 5E Game) → 13 days ago Forum: Tabletop Roleplay
Aura knowing she is better at range rather than risking being up close and personal is going to hold the line (DC 10) as well as using Hawk to gather infomation Aka keeping the bird sweeping over the battle feild to communicate and changes in position or numbers. Maybe any immediate weaknesses as well. She will use there telepathic link and his sight rather than her own to communicate and then speak through the bird to people on the battle feild, specifically Jormund if he is going to be in the front lines. Maybe that will help him out a bit.

If I need to make any rolls for Hawk let me know.
In The Wards: A Grimdark Teenage Superhero Story (Rebooted!) → 16 days ago Forum: Casual Roleplay

Date/Time: November 11th, 2022
Location:En-route to the Museum of Parahuman History

Lito was heavily reconsidering his choices recently before he even realized what was happening, he and several others were shoved into a vehicle and they were off to their first mission. This was insane, right? To shove them into the field on day one. Most of them had little to no training. Sitting in the car the red-head was practically rubbing his wrist raw, silently hoping nobody would speak to him, but knowing he was likely not going to get his wish.

He had spent so much time focusing on not making eye contact with anyone else in the car he was in that he jumped a little in his seat when one of his vehicle mates started speaking. A rather tough looking female in an impressive set of armor. They seemed to be attempting to ease the other’s nerves but the attack on the museum was not what was making Lito nervous. He was more okay with dealing with villains than he was with interacting with other people. The female continued speaking introducing themselves and letting them know their powers. Ending with asking what the others in the car can do.

Lito sat quietly for a moment but when nobody else seemed to speak up right away he simply pricked his finger with the spiked ring that was a part of his cape outfit, allowing the blood to flow out he covered the pricked finger with the blood and hardened it raising his finger for the others to see. “Um, I can harden my own blood into various weapons and tools.” He didn’t speak very loudly and his voice was hoarse as if he didn’t speak much. He spent a moment turning the blood that was hardened on his finger into a small needle. “Swords, shields, armor, that kinda thing.” He was focused more on his finger than he was the others in the car so he had no way of knowing they might be thinking about his power. “Um, my cape name is Bloodlet…” He added, finally looking up from his hand, as the needle that was once there morphed to scab over the small hole in his finger. His wiry frame tensed quite a bit as he did so. He really didn’t want to see the other’s faces but he knew if they were to work together they would have to get over the ick factor of his power.

Lito really hoped that he gave a good enough explanation of his powers. He didn’t feel like answering any subsequent questions. Talking about his power made him uncomfortable. Let's be honest, talking in general made him nervous. That fact would be obvious to anyone in the car.
In The Sahasian Alliance → 22 days ago Forum: Casual Roleplay

The eldest Princess of Astalia listened carefully to the words Vyarin said. It wasn’t hard to tell that he was having issues learning her language so when he swapped to his own Annalise had to concentrate a little harder on his words. Despite her insistence on learning the languages of the other countries on the continent from a young age, she only had a basic, conversational grasp on most of them. Enough that she managed to piece together his explanation. The smile that had found her facial features after her joke was very quickly replaced with one of concern, one she was not able to hide.

She hadn’t realized that The League had such practices. It was a stark contrast to how things were done in Astalia. She supposed at least it was less complicated. She always felt like she was walking on eggshells or even glass shards around Astalia’s nobles. A balancing act she had managed to master at this point in her life. Everyone was polite to each other's faces but it was a very covert game of chess that most of the nobles played. At least it’s how it had been since her mother passed leaving the country with no male heir.

Her blue eyes watched Vyarin carefully as he seemed to change the subject, asking for help with her tongue. She wasn’t used to people admitting their weaknesses to her, and she certainly would not have expected it from the Prodzy Prince. Was he simply acting clueless in order to drop her guard or was he legitimately asking for her help. She squinted a little at him though it only lasted a few seconds, clearly sizing him up, trying to determine his motivation. She mentally shook away that way of thinking. From everything she had been told and observed, mind games were not the way of the Prodzy.

“It would be my pleasure to teach you the language and our ways, no matter who you chose it is information you will need to know.” If this alliance was to work out Vyarin would need to know how to at least speak very basic Astalian, as well as read it. “Other than the language, is there anything you would like to know specifically? If not then perhaps a simple history of the country would be in order?” She was sure he had specific questions to ask so she decided to give him an opportunity to ask as many questions as he felt he needed. Better now than later, Prince Vyarin having some knowledge on Astalia would likely keep the other nobles from protesting too much if Annalise were to marry him.
In Adventure (A D&D 5E Game) → 1 mo ago Forum: Tabletop Roleplay
Happy New years indeed!
In Adventure (A D&D 5E Game) → 1 mo ago Forum: Tabletop Roleplay
Lol I am speed :P
© 2007-2017
BBCode Cheatsheet