STATUS: I am in a slump. So post will either be amazing or terrible 21 hrs ago

21 hrs ago
Current I am in a slump. So post will either be amazing or terrible
1 like
11 days ago
Don't judge me
1 like
16 days ago
Can't change my pfp back... oops
1 like
1 mo ago
bahumbug. There I said it
2 mos ago
Gotta sleep but too wound up

Just a small, fragile birdboy with a huge beak. I use to be Manapool, but we don't talk about those days.

In all honesty I am 21 and in a committed relationship outside of roleplay. I work as a cook in a castle, which isn't as impressive as it sounds. I'm from America in the Eastern Standard Timezone and tend to be up late. I'm interested in history, magic, mythology, true crime, tabletop games and card games. I love getting to know people and am always down to listen if you need someone to vent to! Overall, I'm just a birdboy, nothing special. I have an Interest Check but I don't update it much. Just PM me if you ever want to Roleplay. Big or small.

Dullin watched the others walk past her, and she sulked as she sat next to the now much healthier dragonborn. A chance to flex her literary prowess was nothing compared to speaking with as spirit. Eager to leave as she may be, a mix of fear of the brute and pity had her oblige him. With a grumble, she prodded him for answers, though her eyes kept shifting to the door to the back.

"Go on then" She griped stoically in his language. It was uncanny how the tables had turned. Now she was the one grunting out short sentences and struggling to keep up.
"But I haven't exactly got all day" She continued, encouraging an abridged story.
In Shinobi Ascension: Sons of Otogakure (Naruto Roleplay) → 2 days ago Forum: Casual Roleplay
Personal Data:
Name: Lua
Age: 26
Gender: Male
Sexuality: Pansexual
History:
Lua is a clanless ninja who had a name for himself since he was a chunin by happening to be in the wrong place at the wrong time, but still coming out on top. Despite being a medical ninja Lua often times found himself joining the fray in fights they needed to win in order to keep Orochimaru's plans secretive.

Growing up Lua was rather underwhelming. He was below average in ninjutsu and struggled to keep up with his allies in taijutsu. His teacher managed to notice what he excelled in, however, and by the time he became a chunin he adept in controlling his chakra and even managed to learn the very intense healing jutsu from a young age.

Passing his chunin exams, almost immediately Lua got thrown into the fray. Recon and stealth where the name of the game but other ninja proved to be very perceptive. More times than not Lua's missions ended with a death, something Lua saw as wasteful. Still, as Lua grew into an adult he learned how to kill a ninja with unnerving skill. This came to a halt, however, after Lua bit off more than he could chew. Lua's group was sent after a ninja from amegakure, and when they attacked him the rival ninja proved to be too much. At the expense of both members of his team, and Lua's own right arm, he killed the man and stumbled home feeling broken.

That day, Lua's ideals about being a great ninja began to die. He did not care about the honour or his pride. His country seemed much less important to him without his friends. When he returned home, a prosthetic arm was given to him, but it was heavy and Lua needed time to adjust. His skills as a ninja were noticably fading and Orochimaru took note. Lua was a useful asset to him, and had proven his loyalty by sacrificing everything for his mission. As a blessing, but mostly to keep Lua up to his standards, Lua was lured in with the promise of 'healing' and left Orochimaru's lab with a curse seal. At first lua was happy to be able to keep up with his team mates, but over time the curse has grown stronger. Lua grew worried as missions he was sent on grew increasingly violent from his own lack of control.

Lua is currently in charge of teaching students as a way to keep his mind off such dark times in his life. With healing Jutsu at his side, training can go unhindered by injuries, and his experience in the field help him teach students. Being a teacher has been great for his mentality too, and has helped him keep the curse seal under control. 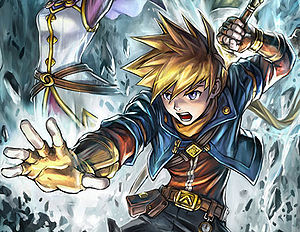 Personality: Lua is a humble and gentle soul, never letting his pride get in the way and always looking out for others. He can be considered selfless to those he cares about: literally willing to take a bullet if need be. Lua has the patience of a man twice his age and is always willing to drop everything to help those who need it.

Lua may be a great person, but he struggles just beneath the surface. The tragedies in his life have caused him a lot of self-doubt and failure always hits specifically hard for him. His humility often times borders on denial as he will never accept a compliment. He gives up easily on arguments he can't win and is generally a passive character unless he needs to step in.
Goals: