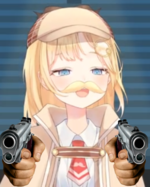 Are you thinking corebook only or are the expanded archetypes allowed too?
In Urban Shadows - an urban fantasy, creature of the night RPG → 8 mos ago Forum: General Interest Checks
I'm down.
In Winter's Blade: A Fairy Tail RP → 9 mos ago Forum: Casual Roleplay
Arcturus
Interacting with: @Hero@Raijinslayer@KiwiTime@Inkarnate@Sloth

"Hey kiddo," Arcturus greeted with a smile and a curt wave of the hand. Just because Sebastien's daughter had no business being in this very kid-unfriendly place, it didn't mean it was okay to be impolite! Unlike the reporter, he refrained from questioning Sebastien's actions; if was willing to accept the consequences, clearly he had some kind of hidden parental wisdom that Arcturus was lacking.

The blond wizard just shrugged his worries away. There were other things he could and should think about. According to Claire, the symbol was a warning of dangers hidden within. Arcturus opened his mouth and said insightfully: "Well that's not very nice."

This was, of course, not incorrect.

As the rest of the group strategized (sort of), Arcturus kept quiet for the most part. This was because his own plan started and ended with "run into the forest" with a contingent "and punch something". To avoid looking out of place, he stared at the symbol like he was thinking of something relevant, which he wasn't.

"I guess that means you two're with me then," the wizard piped up now that he had something worth saying. He looked over his shoulder at the father and daughter, and gestured for them to cross the invisible line delineating the two groups.

"Oh! Thanks," Arcturus accepted the magic mirror from Nia and joked, "Here's to hoping these are completely useless."

"...Well, maybe not completely," Arc squinted into the reflective surface and quickly fixed his hair. He then tucked the object somewhere inside his cape. Being in a haunted forest full of occult warning signs was no excuse not to look bad in front of any hypothetical ghosts or spirits--and certainly not in front of the media!

And with those words, Arc led his group into the forest.
In A Worldbuilding Exercise [Private] → 10 mos ago Forum: Tabletop Roleplay
Turn 3

Most hilarious event I have ever witnessed.

I jest with you not, fellow gods. Manadd shapes land. It's dubbed "Deep Sea Trench".

Action - Shape Land (3 points per use)

On the following squares: