STATUS: Well, Discord, Steam, and much of the internet may not be working right now, but at least my POS computer has let me work on replies and listen Youtube. Even if it's claiming I don't have internet rn 1 day ago 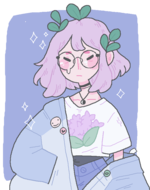 1 day ago
Current Well, Discord, Steam, and much of the internet may not be working right now, but at least my POS computer has let me work on replies and listen Youtube. Even if it's claiming I don't have internet rn
3 likes
7 mos ago
if you're stressy and depressy and your life is kinda messy, clap your hands 👏👏👏
21 likes
7 mos ago
*windows 98 boot up sound*

dancing with the devil
Trigger warning: smut, violence, dark themes, drugs, alcohol, and everything in between.
please be 18+ and comfortable with most themes <3

This is an idea I've had before, and with mild success, I'm looking to try it again. First things first, rules, simply because I know they're boring, but if I don't get them out of the way, I'm just gonna have a bad time.

- 18+, not negotiable. If you're not comfortable with adult themes, then this definitely isn't for you. There will be smut, so also no fade-to-black. There's gonna be a lot in this, hopefully. Violence, abuse, drugs, booze, maybe some more questionable things, I'm open to just about everything.
- Got a limit? Just let me know, and I'll do the same.
- Posting is something that gets a little tricky. I'd like a few posts a week, ideally once a day. I give about as good as I get, and if I'm especially excited, I can easily crack out multiple posts.
- That said, I know people are busy. I get busy. If you need time, just let me know. I'm not gonna hound you if you disappear for a few days, but if you're gone for a week, I'mma poke you to see if you're still alive.
- Don't ghost me. Don't even think about it. If you do, just don't message me. Honestly, I've been ghosted and burned so many times that it's just plain tiresome. If you wanna end the roleplay, tell me. I'm not gonna get bitchy at you. I'd rather have closure than wondering wtf happened. Thanks for coming to my Ted talk.
- Communication; goes hand and hand with the above rule. I want someone who is gonna bounce ideas off me and is eager to plot out the roleplay. Friendship is nice, and I am more than happy to talk outside of the roleplay, but I know it's not for everyone.
- If Discord is your preferred thing for OOC, you can hmu; glitter#5629.
- A bit random but - I don't require much for character sheets. If you wanna go all out and hog wild, go for it, but I do the bare minimum, simply because I prefer to explore my characters actively in the roleplay. Appearance, age, basic stuff is all I really do, but I won't stop you from doing more.
- All that said and done, I do require realistic face claims or realistic-looking drawings. I don't touch anime with a ten-foot-pole.

Hey, you still with me after this wall of text? Great! 'Cause now it's time for the fun to begin. <3

So, this is going to be something different from my norm, since I actually wanna play the female lead in this roleplay, while my partner takes the role of the strong male lead. Weird for me, I know, but it's something I wanna do, aha.

Your character owns a strip club, maybe a few bars or nightclubs as well, but his main place is always the strip club, where my character works as a dancer. The businesses are mainly a front for whatever he does behind the scenes, be it run a gang, mafia, mob, or just be an independent contractor that can get people most things off the black market, that is entirely up to you. My character is just a college girl trying to make ends meet, and discovered that dancing on the stage at night will pay the bills. It's not perfect, but anything to get to the end of her degree and enter her dream job.

One night, he takes the fancy of my girl as she's up dancing, and treats her to a night of drinks - something different from the norm of working all night. One thing leads to another and they end up back at his apartment, sharing a night together.

After that, life goes back to normal. She sees him around but knows it was nothing more than a night to blow off some steam. He doesn't take much notice of her, perhaps giving her a small smile or a nod as he passes her, or lingers for a bit to watch her dance, but keeps to himself. A few weeks pass, and as is the typical trope, I'd like for her to discover she's pregnant. This is where there are a few options, whether she keeps the baby, puts it up for adoption, there's some grand trope of the two falling in love, or she miscarries. Don't get me wrong, I want there to be a romance between these two characters, but I don't want it to be instant just because she's gotten knocked up.

That said, I do want one scene in particular where after she discovers she's pregnant, she's still working the stage because right now it doesn't matter - right? One of the guys gets a little too handsy, a little too frisky and when she tries to pull away, ends up getting attacked by the pissed-wasted guy, maybe punched in the face or something. Security will get the guy off her, kicked out of the building and she'll be moved to the dressing rooms. Your guy can come to check up, since security would have notified him and maybe overhears my character and some of the other girls talking about how stupid she is that she was even working while pregnant, risking herself like this.

Copying and pasting this from the original plot, I'm keeping it largely the same. The only thing I would like to include is an idea I tried to implement with a previous attempt that fell through, and that being that my girl is taking care of her younger brother, both of their parents being out of the picture. I'm thinking dad walked out while mom probably got really sick and likely passed away, and so MC has stepped up to take over. Adds more drama, and it's a fun concept I really wanted to explore.