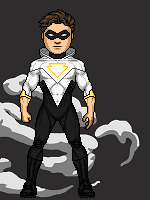 2 mos ago
Current First Kevin Conroy and now the original Green Ranger from MMPR... my childhood is taking direct hits rn.
3 likes
3 mos ago
If you've seen Black Adam and dig the idea of the Justice Society... roleplayerguild.com/topics/…
4 mos ago
My next superhero RP if you missed the last one! Hopefully see some of you there! roleplayerguild.com/topics/…
1 like
5 mos ago
Nice bunch of superheroes if I do say so... cdn.discordapp.com/attachme…
5 likes
6 mos ago
The 80's wasn't just a decade, its a state of mind....
1 like

You JUST scrolled down!

Hello out there! My name's Mason. I enjoy comics, movies, and television as well as a good superhero themed role play! I'm more of a DC freak than a Marvel zombie but I did grow up on mutants and 3rd string heroes. Once in awhile I'll make a few micros in MSPaint for my RP's because I love designing heroes as much as I do writing/reading about them. I'm about to try and get another DC Universe themed game off the ground, if you're interested gimme a shout!

My top RP's on the Guild:

I've been RP'ing for awhile now. I mostly RP to keep my writing skills up to par, and I generally RP between Casual and Advanced. I've been a member of the guild for quite a bit, pre Guildfall even. Originally I'd come to the site to out a plagiarizer who took parts of my stat system from a Green Lantern Corps RP on another site, as well as bits of my posts and other players' work as well. Once I got that troll taken care of, I stuck around.

If you guys are all game for the 30's era pulp/golden age heroes w/stats I can begin developing that OOC and post up a CS template.
In Multi-Interest Check of Interests → 4 days ago Forum: Casual Interest Checks

That 1930's game sounds interesting. What is the system you're using?

I've got a super simplified system I originally used for a GLC rp. Mostly just for making fights a little more interesting. There's a link to an old rp using it in the Legion of Superheroes bit....
In Multi-Interest Check of Interests → 8 days ago Forum: Casual Interest Checks
Okay… so… my last interest check was a two for one. And it doesn’t look like Superman or Ironman have enough of a fan base on the guild to get an RP going for one of their families of characters. Rather than write up whole Interest Checks and OOC’s I’m just gonna throw a few more ideas out there and see if enough people can get behind them before moving forward with developing one of them and fleshing them out. I’ve got modern day DC superheroes and Power Rangers covered in Titans Academy and Legacy of the Dragon, so whatever I do for a 3rd RP will have to scratch a different itch.

Legion of Superheroes – Three young heroes come together in the year 3000 to save the president of the United Planets and the Legion is born. When a mysterious villain kidnaps Colossal Boy and uses stolen tech from the remains of Cadmus World to clone himself a giant army, its chaos in the stars. Create your own alien superhero or recreate one from the vast Legion canon. I’d love to get a group of 6 or 7 for a stat based RP like we did with the last one…

The Fall of Metropolis – Superman and Lois are having another baby, and taking an extended vacation in the Bottled City of Kandor. While Superman is away, the remaining Super-Family as well as other heroic Metropolis residents protect the city. However, Amanda Waller and mad scientist/businessman Lex Luthor have different plans after cloning the Man of Steel for a small Super-Army. What happens when another hero is hurt by one of Waller and Luthor’s pet clones? If you guessed ‘the Fall of Metropolis’ then you might be right. Need 5-7 players for this.

Capt. America Lost – It was 1945 and the Allies just won WWII. However, Captain America was lost somewhere at sea. The remaining forces of Hydra were thought to know the location of the rocket that Cap was strapped to. It was the Invaders mission to beat it out of whoever had the information. Rework classic canon Marvel Golden Age heroes or create an original for a mission that will ultimately fail. Who lives? Who dies? Who really won the war? Need 5-7 players to really make this work.

Mean Streets of Steel City – Set in the 1930’s, this combines the era of pulp heroes with the earlier golden age comic concepts. We’ll take our heroes through a campaign against crime and take on the likes of the Copper Kids gang, murderous bootleggers, a crooked cop or two, as well as a super-powered threat based on some of the best golden age stuff out there. Use an existing canon like Doc Savage or the Green Hornet, make your own pulp or golden age hero, or put a twist on a classic [for example I thought of ‘the Scarlet Shadow’]. I had a similar RP to this pre-Guildfall that was stat based and a lot of fun. I’d love to get something like that going with as little as 3-4 additional players.


Gods ✟ Monsters – After a techno-organic virus wipes out nearly one quarter of the planet’s population Hell gets overcrowded fast. Ghosts begin to walk the Earth, and the Devil himself has come to lay claim to the surface world. When the One Above sends down the Archangel Gabriel, he’s tasked with assembling a group of monsters and men to stop Lucifer at all costs and close the gate to Hell. This is meant to be equal parts Supernatural with a dash of superheroes/anime. Werewolves, vampires, hunters, a friendly ghost, wedingos, a forest guardian, maybe a siren or banshee, possibly a priest… 5-7 players needed for this one too.


So yeah… I kinda reworked the Superman idea a little for one of the ideas, and two of the others are preferably stat based. The system is super easy and built for forum style RPs to make the combat a little more interesting. If I can get enough interest behind one of them we’ll get a CS template up and an OOC. Legion of Superheroes is something I’ve done a few times before, and a futuristic DC setting with new alien heroes is super appealing. A couple times I’ve combined it with elements from Ben10 to make something we called the 10th Legion, but Ben10 stuff lately never takes off. Mean Streets and Cap Lost both are on the list cause I’ve really been needing something tied to the Golden Age. One being street level pulp style heroes with light golden age tones and stats, the other being full on WWII superheroes vs Nazi-knock-offs… I’d be ecstatic to get either one off the ground. G✟M is something that just hit me today when thinking about how the Supernatural universe could be reworked into something more superhero or anime-like. That one could be stat based or not, I’m just game for something different. I usually build stat based arcs around a 25 enemy campaign model.

What I was hoping to get done is this planet's busted open side recolored to a purple color rather than the lava looking colors as it's a more mystical planet in the story.

If we're going with the Iron legion are we only going with canon armors or is fan made stuff fine?

Fan made armors are cool, there's going to be a bit in the CS requirements about special abilities and powers for the armors in case folks aren't as familiar with them. No one armor is going to be super OP compared to the others. There's like base armor stats in my head, but each suit can have a specialty: speed, stealth, durability, blast power, strength, etc.