The Long Dark Nuka-Break of the Soul 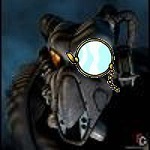 They collided, there was a sound and a fury that signified a helluva lot more than nothing, and then blackness. There were sounds, kind of distant and distorted, a vague awareness of it all muffled by soup, and then as it all started to return to focus...there was pain. He felt the coolness of the arena floor, a definite stiffness in his neck, and...oh wow, that hurt. Yeah...looks like he got hit under the jaw pretty good. First thing Angela would see is Niko's jaw opening, the tightening of his eyes shutting before opening, and then a definite grunt of irritation at what he felt as consciousness was achieved.

He heard Angela speaking and the crowd cheering and...aw nuts. Niko sat up with a sigh, holding his jaw and feeling for a break. Nothin'. Good. At least he had that. Well, they'd give 'im a Senzu Bean for his troubles, anyway, but he would've liked the satisfaction of having taken home the prize, so to speak...or rather getting one step closer to it. Still, only one of them could've gone on, and unless he misheard her, Angela had good reason to win, as well. If it wasn't for the fact that Niko had realized he need not hinge everything in his personal mission on this thousand-to-one shot of a tournament, he would've felt alot worse, but...thanks to these people, this tournament, he realized...he could probably get what he needed through what he'd acquired already. So, with that, he stood up and came alongside Angela now.

"You said you had alot riding on this, and I believe you. Just remember that Bakuto has speed like mine, maybe even greater, so take care, Angela."

He gave her a smile and started to walk off.

Maybe I should let her in on things so she could help...mmmm...Naaah. She's a prize-fighter, not covert ops. Let it go, Niko.
In Dragon Ball: Universe Zero → 8 days ago Forum: Casual Roleplay
Awww...

I'll get you NEXT TIME, GADGET!

*Flies off into the sunset with a cat meowing in the background*
In Dragon Ball: Universe Zero → 9 days ago Forum: Casual Roleplay
Well, think of it this way: If it doesn't work out for Niko, he might have nothing left.
In Dragon Ball: Universe Zero → 9 days ago Forum: Casual Roleplay
Somebody - everybody - make sure I'm doing that right.
In Dragon Ball: Universe Zero → 9 days ago Forum: Casual Roleplay
Unfortunately, she was right. His liberal application of speed was no different from anybody else doing the same. And damn, if she hadn't intercepted him like a pro. Angela hadn't come away unscathed herself, but she hadn't been quite as hurt as he was. Again, she'd gone down as he had, but this time he was hurting more and was only rising this quickly out of necessity and military training. Never stay down. Never allow your opponent to get a free hit in. Niko got to his feet, rubbing his chest where he'd been clotheslined. That was proper fire, right there. He was happy that Angela was getting the fight she was craving, even let out a bried laugh - it hurt to laugh - to her smirk, but inside...

Inside, things were very serious, indeed. He didn't want to end it here if he had any say in the matter. He wouldn't be at all happy if he didn't give it everything he got. And while Niko had been hoping to save this back...a part of him knew that Angela was good enough that she'd require him to do it, to attack with all his might...and his own special technique. They stood facing each other again, a little distance between them, but...he figured if he did it now, she wouldn't be able to evade it. That would give him back the edge, if not put him through to victory. It may all very well hinge on this...

They had been up on the mountains - master and student, soldier and superior officer - training like hell, more intensely than he had ever done back at the base with the rest of the class. Finally, one day, close to sunset, she stopped him. He had been sparring and going through physical exercises with this taller, somehow stronger, pink-haired adult woman, Athena, and now...

"No, we're beginning. All this was just to make sure your body could handle the stresses of what I'm about to show you. It's a last resort...or maybe a best resort. It's down to the user, really."

She held up her hand so he could see clearly, then balled it into a fist. Almost immediately after, the hand began to vibrate...and then rotate. Not like spinning at the wrist, because Athena was as human as he was. The armseemed to move around in the tightest of circular motions, like the fist was in a circular blur of motion, and it was ever-increasing... After a few seconds of this, she turned and thrust her arm away from them both, striking the rockface and causing terrible damage as a wind vortex arose to scatter stones and dust all over the place! Athena let out a sigh. She'd just destroyed a good chunk of landscape.

"This is the Tornado Fist. I'm giving it to you, Niko. I know you can do it, and I think you're the one to have it."

"Niko, I'm over 40. I may not look it, but I'm startin' to think it's time I passed my real skills on...and you're the best student I've had, so far. I need to say I went through life with no regrets, doing everything I can and accomplishing everything I could. This strength of mine should never die, so starting today, you're working on destroying boulders with your bare hands."

"Yeah, what I did there is the fully-charged version. You oughta' be able to do the quick one, by now. Maybe after enough practice and 'leveling up', you can work up to full power. Heh, and then things get interesting. Now, get to work, soldier! We've got daylight still!"

They would work through the night, Athena's velvet-glove-around-an-iron-fist method of teaching getting him to focus himself, and eventually...success!

...but would it be enough? As Angela made her declaration, he would pull his hand back in his stance, saying "I know. So do I." as the clenched fist began to vibrate and rotate in a blur. He hadn't mastered the full power of his move like Athena had shown him, but he had gotten on the ground floor and managed the instant-form. Angela came forward to try and sock him one good under the jaw. She would see the seriousness in his eyes...and know he had something of importance riding on this, as well. His fist came forward, carrying unexpected force generated by that personal vortex. In English, it was the Tornado Fist. Niko preferred it in Japanese.

He would throw his body weight into it, the whirlwind of force released from his fist surging around him as he pressed forwards, trying to blast Angela away or aside as he carried on through.

--Attack: 30 x 2.5 = 75
---Speed: 30 x 2 = 60
-Defense: 0
In Dragon Ball: Universe Zero → 9 days ago Forum: Casual Roleplay
@Darkmoon Angel If you want to go first this time (like if you're ready to right now), I'll wait this time.
In Dragon Ball: Universe Zero → 10 days ago Forum: Casual Roleplay
Oooh, an irrestable force and an immovable object... Shall the universe move instead?
In Dragon Ball: Universe Zero → 10 days ago Forum: Casual Roleplay
Agh! Dammit, that's where Rica cut him earlier! Angela still managed to clip him in the chest, and it was where that Slicing Wave had hit before. Not an issue physically, since his recovery was considered complete by the tournament staff, but it was something of a 'Not again!' for Niko as he rolled past and got to his feet. While he'd managed to recover his feet while ultimately tripping Angela up, she too had gotten to her feet and they were essentially in the same position as before, just a little more injured now. Niko got kind of a mental 'Oh Crap' next when he felt a little deja vu for his last fight and decided to act quickly.

Attack now, and put some oomph into it! She expects no less. Angela would see him slip to one side to flank- The other side! The previous side! From behind?! It was a swift zig-zag approached at high speed to make it hard to determine where the attack would come from. This wasn't like Bakuto's after-images, but rather a case for not knowing whether it would be left, right, center, or back before he actually struck, essentially trying to use speed to get past those fists of hers before using his own in a one-two-hyaah motion, two fists and a kick when he felt he had an opening.

--Attack: 30
---Speed: 40 x 2 = 80
-Defense: 17
In Dragon Ball: Universe Zero → 10 days ago Forum: Casual Roleplay
The young soldier had been a little too caught up in himself to do more than give Bakuto a nod. He seemed like a decent guy, at least. They hadn't talked before now. Maybe they'd talk again later with congratulations to the Champ, whoever it turned out to be. It was kind of a holy shit, really. The last three people and he was one of them. He could just about picture Athena in a bar somewhere with a grin on her face. Maybe you think of your teacher as someone who would never be in such a setting, but he knew better. Athena was career military, and the army liked to unwind just like everybody else did. Still, that wasn't the point. His match with Angela was next, and by the looks of things, she was eager to get punching.

Regardless of who wins, I'm gonna be feeling whatever she dishes out for a while.

Now, they were called to the center stage, the arena floor.

They stood on opposite ends of the arena after the trumpets had blasted, facing each other. The announcer was delivering his pre-fight introduction to how far the two of them had come, just as he had done with Lee and Bakuto. As he did, Angela called out to him before taking a stance. He settled into one himself, saying...

"If it happens again, it means someone's interfering. Remember that."

He hadn't had the chance to talk to Angela about it. Bakuto's fight had gone too quickly for him to broach the subject. At least he had the chance to warn her here, make sure she understood that he would not back down here, not willingly. Not with a just cause and even a certain joy in showing the world what he was capable of. Hell no. He would take this to the end, as far as he could go and beyond.

He knew her capabilities, of course. Angela was very tough, especially with her fists. To prove this point, she was already attacking without delay, and she was quick! Niko had only a couple seconds at best to move, and his nearest instinct was that if she was planning to knock the wind out of him like that, then he needed to get lower and out of the way. He dove left and swung one of his legs at hers, hoping that the he'd knock her off of her feet so he could quickly recover here and take control of things.