Writer of Story and Smut We all love both 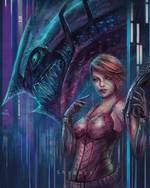 David shot away, panting as he looked around. He mustve dozed off during the escort. Creaking his neck and looked at the others. "Sorry, how long have I been out?" Looking over at Mackenzie, wondering what happened since he was asleep. Knowing that he missed a lot. Letting out a sigh as he tried to remember his dream. It felt like the last minutes of it were slipping away from him, as he tried to hold onto them.

So much has happened since he woke up in this wild place. Despite just arriving, he felt like he spent an entire lifetime here. And even though he was a stranger to this world, he felt like he has been her for ages now. Spent his entire life in this world. Not to mention the shadow arm, it felt...familair somewhow. When ever it came out of his back, sometimes he felt like he wasnt in control of it. As if it had a mind of its own.

It was like it was the arm of someone else, trying to protect him.