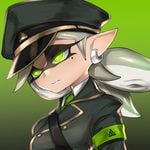 Bio
Sorry guys! currently not home, have to deal with some issues regarding documents & other boring adult stuff...

7917 posts
in 2873 days
Seen 5 hrs ago
Bio
Arena:
1 / 1 / 0
To all Resistance members, both Future and Past, could you all fill this out hen pm it to me and the GMs? It would help me with Charles greatly and also give me a timeline for when everyone joined it and how many members we have between the timeskip and the present. If anyone wants to do an actual memory, I would be pleased to weave that with you and place it into the IC at some point when important unless it’s recent then we can work things out with the timing.

Date of interview: Arc 1, Day ?
How did you learn of the Resistance?
Motivation to join?
Skills to add to the Resistance?
Understanding of what might happen?
Relatives to contact in worst case scenario?
Additional information?
Contact information?
Hidden 4 yrs ago Post by 13org
Raw —

Bio
Will have my post done this week. Going a bit slow due to college (tests & etc.)
Hidden 4 yrs ago Post by Fallenreaper
Raw —

To give life to the OoC, I posted! I think within the next few posts we should consider wrapping up this scene and moving on, sound like a plan? Btw, Gecko... do you want to do a collab with Nikki? It would cover more ground than single posts in my opinion and make things easier with back and forth replies. I got to give a little comic relief to this scene after all. XD
1x Like

Just waiting for May and Rich's reply so I can move on with Corinna :-)
1x Like

Currently Gdocs right now. They are pretty easy for me to access and modify on my laptop.
Hidden 4 yrs ago Post by The 42nd Gecko
Raw —

Collab for Katarina's mindspace, and some of her upcoming physical actions.

I mentioned the possibility of "Hey, what would happen if the alcohol in the bar caught fire?"

Then, the subject of "Wait, doesn't Nabri have a bunch of potions here?" came up.

Then, deck of many things as a random magical effect table was used.

Long story short, here are random magical effects that can happen to your character, if you want your character to be affected by a spilled/exploded Nabri potion cocktail.

Amon got the Two of Cups upright, making him fall in love with whoever is most attractive to him within the next 24 hours, and gaining a TON of charisma for the purposes of who he's falling in love with. This sure does sound like Nabri's potion stock.

Damian would get the Three of Swords upright, which means he will have a fight till at least one person is unconscious or dead, within the next 30 seconds. :/

Darius would get Six of Cups upright, meaning that a companion he hasn't seen in a long time will soon send him well wishes and a useful item.

Masha would get Seven of Cups reversed, meaning that she gains the power to see through illusions, and any illusions she casts are stronger.

Rich would get The Devil upright, meaning that he gets attacked by the Devil. I'm pretty sure the Devil is just waiting until they're in private before attacking.

Corinna would get the Page of Swords reversed, meaning that her defense is slightly reduced temporarily. Alright, I think that's the least exciting one yet, unless you're creative with the interpretation of defense.

And I drew Wheel of Fortune reversed for Nao, which is awful, but she's not even there and it was a for fun draw.

If you want some more inspiration, me or the vast endless information of the internet can tell you more about what tarot cards signify.
1x Laugh

By 'defense', surely you don't mean only physical one, right? But emotional as well?

mischievous smirk That could be interesting lol.
Hidden 3 yrs ago Post by The 42nd Gecko
Raw —

3255 posts
in 2741 days
Seen 4 days ago
@13org Hey, take it however physically or metaphysically you want. Metaphor and symbolism is all up in the deck of many things.
↑ Top