STATUS: Back From Vacation! Posting Faster but Steady, due to an Incoming Semester. Kudos to the Patient Ones! 5 days ago 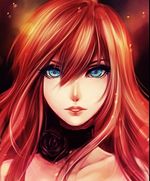 5 days ago
Current Back From Vacation! Posting Faster but Steady, due to an Incoming Semester. Kudos to the Patient Ones!
2 likes
2 mos ago
Sorry for the lackluster in keeping up. Making a schedule on posting, study for permit, video gaming, and real life activities :) I hope to get over the bumps soon.
3 likes
2 mos ago
Never Felt So Proud of Myself For Simply Updating My Bio & Interest Check! Now I Hope To Have Good Dreams :)
4 likes
3 mos ago
Officially Turned 22 Today! Sky’s the Limit For This Aspiring Artist! :)
10 likes
3 mos ago
Junior Year of College Finally Ended! Hello Summer :)
5 likes

Personality: Ambiverted, Caring/Compassionate, Understanding, Friendly, Honest, Imaginative, Artistic, Funny (in my own way, apparently), Confident, Strong-willed, Feisty, Sisterly, Organized, Protective, Loyal, Stubborn, Tomboyish, Determined, Opportunistic, Sarcastic, Obsessive (somewhat), and Easily Distracted.
Habits, Tics, and Quirks: Speaking in Accents (Australian, Russian, British, German, and Kiwi), ADHD, ’Experience-Taking’, Asperger's Syndrome (don’t worry, I’m highly functional).
I must warn you that, when it comes to the works, I tend to be a little preoccupied, or hyper-fixated, with the ones I'm already into. If I lose interest in a story within play, it may either be a short-term writer's block, or if it's time for me to recommend something else. Bear with me, if I ever reject an unfamiliar idea, or suddenly suggest a new one.
Biggest RP Pet Peeve: Whereabouts and Ghosting.
Please be present and keep me updated from time to time. I'll do the same.
It's annoying when people become invisible, miraculously appear out of nowhere, and complain, once they find a story cancelled.

Basic Comforts:
~ Primarily 1x1, since 'time' and 'waiting' are not really me.
~ Mainly female OCs, though on rare occasions, I'll take on a male role.
~ OCxOC, CanonxOC & (rarely) CanonxCanon. I can play various canons for both of the two.
~ FxF, MxF & (rarely) MxM. I mostly lean into the dominant-role, depending on character and plot.
~ Both thread & PM, but stories with strong adult content belong in the PM. No exceptions!
~ Face-claims are preferable for RL OCs, along with voice portrayals for those animated.
~ Open to dark themes (drugs, abuse, etc.), but NO pedophilia or bestiality (except for anthros).
~ Smut-only, slice-of-life, and rushed story-lines are (also) a big NO!

With a sigh of relief, Lochila acted quickly, gesturing to the blonde girl to follow her, by the time she started walking. She couldn't help the fact that she was being watched from behind, and that from her own instincts alone, the dark-haired goddess didn't turn around, and kept walking. She really didn't want to be directed by her brother, any more than she had to, so she kept herself quiet, until she and Torunn reached another hallway. It was then that she finally managed to breathe properly. However, by the time they made it, a flash of light crossed Torunn's vision; a transparent image of a man with raven-hair, and donned with black robes, walking by. He turned back to look at her, smiling "kindly", before disappearing through a wall. Lochila failed to catch it, as it moved too fast. But it only seemed to slow down for Torunn, in time for her to see it completely.
Opening a pair of doors, the dark-haired woman revealed a bedroom, complete with a queen-sized bed, light curtains, and metallic flooring. It seemed to be covered, head to toe, with gold. "I think this will do nicely. How do you feel about seeing our library?", she said, turning to her.
In Runnin’ The 90s (TMNT): Together { Beetle & Angel } → 22 days ago Forum: 1x1 Roleplay
What would you like to do?
In Runnin’ The 90s (TMNT): Together { Beetle & Angel } → 30 days ago Forum: 1x1 Roleplay
Okay.
Do you want to try nailing those?

Or, would you like to move onto another story, after our current one?
In Runnin’ The 90s (TMNT): Together { Beetle & Angel } → 30 days ago Forum: 1x1 Roleplay
Regarding TNM?

Once we finish the trilogy, how do you feel about a continuity?
Into that of 'The Next Mutation'? But some elements will not be involved.
For example, Tatsu will take the Shredder's place, as he had died in the movies; Bonesteel will hunt them; Doctor Quease is Quease; the Dragons escape the mirror, etc.
In Runnin’ The 90s (TMNT): Together { Beetle & Angel } → 1 mo ago Forum: 1x1 Roleplay
None of them stepped out of the lair, that night. At least, not yet. Some time to lay low was needed, so they can prepare themselves for a possible frontal assault.

It took a bit of convincing, but April allowed Danny to spend the night with them in the ransacked lair. As much as she wanted to waver it off, Jennifer felt an aura coming from him, like there was something he wasn't telling them. It created all sorts of unease for the Asian teen, as she had to rely on her ability to observe, in order to pinpoint what it was, exactly. So far, he behaved like any other teenage kid; something she and Charlie could relate to. But then, there was also slight paranoia. What was he afraid of? Was he hiding from something, or someone? There were hints of rockiness between Danny and his father, but was the relationship that bad, that it made him go into hiding? It was a small feeling, but then, the paranoia and confusion in his eyes, said that it was something else entirely.

After chuckling at the shenanigan over a Penicillin-filled pizza, Jennifer took the time of discussing with Leonardo to come up with a game-plan. After gaining notice of her mature intelligence, the swordsman got the courage to approach, and ask for her opinion. It surprised Jen, but then, she wondered. Maybe the eldest brother felt that her wisdom as an "older sister-figure" would reassure him that he wasn't failing as a leader. After his tussle to Raph, that day, Jennifer's words made him realize that he made a mistake; one that nearly costed his rebellious brother's life. Including those times of training together, Leo's interactions with the Asian girl were comforting yet tender. Nobody else gave him such powerful wisdom, aside from his father. He couldn't believe he became so fond of her, in such moderate time.

Meanwhile, hoping to distance himself from the growing aggression in his chest, Raphael was gazing at some of the weapons that were hanging on the wall nearby. He didn't know why he was, but the thought of Charlie, was invading his mind and, after he instinctively stepped in front of her, at the first sound of danger, it occurred to him that he was also becoming protective. Of course, when you have family, you always want them to be safe, but then, that very incident mentally told him that he should shield her from all kinds of bad news. It confused him but, the brunette girl brought him a sense of serenity and....it felt good. On that thought, his heart skipped a beat again! It was all starting to become overwhelming. He nearly jumped out of his skin, by the time he heard her voice.