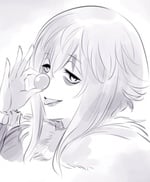 5 mos ago
Current Pee
11 mos ago
If anyone needs help applying their clown makeup, lmk <3
5 likes
2 yrs ago
BC classic is going to consume all of my time.
2 yrs ago
Literally me on a yearly basis.
1 like
2 yrs ago
Never ask about the children, Margaret..
1 like

”What ifs we not able to steals stuffs?” Asked a young brown-haired folk, his bright blue eyes blinked anxiously and his sandals scraped across the dusty floor beneath him.

Then the young thief bounced from her imaginary podium with a hand in each of her pockets. She marched past the small group of misfits and took the lead for them to follow, and they did, until Tomoe reached the edge of that current of people. They were all so fixated on the festivities, most with their eyes trained up towards the spectacles in the sky rather than beneath them. The small entourage dispersed, each kid clad in a small brightly colored kimono and a waxed paper mask. A shit-eating grin slowly spread from cheek to cheek upon Tomoe’s face, happily beaming the crooked pearls between her lips as she followed suit to the rest and entered the crowd.

Like a piece of driftwood she allowed the current to carry her to the larger mass of people. Her vulpine eyes noted every wallet and satchel she passed along her way. Some were intentionally light, locals who knew better would not bring so much to a large gathering like this. But others, especially those who were not so familiar with this city, did not take any precautions. Her small hands deftly found their way into a number of pockets along the way, feinting small innocent bumps and stumbles to dispel any attention. Eventually the ebb and flow would take her to the center of events where the largest crowd gathered.

Her form shrunk down as he hugged her knees and shook nervously. The big green eyes in her sockets snapped around her, clocking any cautious faces, and more importantly anyone who was concerned. Eventually a young woman pressed through the crowd and hunkered down with Tomoe, her well-done makeup and beautifully maintained raven hair painted her an easy mark. She was the daughter or wife of someone with wealth, most likely, and her arrival caused Tomoe to blossom out with the greatest of dramatics.

”Where is your mother? You shouldn’t be alone in a crowd like this!” The beautiful young woman’s tone was urgent, and her voice was hushed.

The beautifully dressed young woman stared down with sympathy, unaware that this young girl was likely just a few years younger than herself. But still her delicate hand reached out to take the callused grip of Tomoe, and the young thief offered the wealthy woman a little squeeze of gratitude. But as the woman began to lead Tomoe out of the crowd, the wolfish grin crept back onto her lips.

Like taking candy from a baby.
In A Thousand Legends ~ Sundered Veil → 4 mos ago Forum: Casual Roleplay

The two ogre guards stare down at the bumbling-blabbering outsiders who they had never seen before. The caravan itself was quite familiar, often taking people who wished to leave the city elsewhere and not often bringing them back. The only familiar faces were a demon from money, and a scary goblin, both of which usually traveled in and out of the city without so much as a word. But tonight, the fire haired demon brought company along with them.

”Brud, da’ poopsack are these people?” The orc on the left looked first to his brother on the right, and then down to the smaller folk who approached them.

”No clue, Der.” The slightly shorter ogre on right stated, reaching up a finger beneath his helmet to pick his nose and flick a booger down at the dirt.

A whole entourage approached the ogres, and their common tongue was quite limited as it was. Which made the rather eloquently spoken creature dressed in skins, and skulls, and oh that smell. What was that smell?

”Dis ‘un smells like poop.” States Der, cackling happily as he did so.

Brud set his pale yellow eyes on the small hollow-eyed knight who claimed to be a hero, with an energetic declaration. He grinned and cackled in amusement, bending at both knees to get a closer look and sniffing the air to catch the scent of the fae. ”No heroes in these parts, bug.” The more educated ogre stated directly to Lumen, a sneer now worn proudly with eyes aimed straight at him.

”Are da’ pretty human tastier?” Der asked over to Brud, who now scanner each of the new arrivals. There was quite a lot of humanesque figures here at his door. They were lucky.

”Foreman isn’t too fond of bloodshed at the main gate -- but typically yes.” Brud stated, still squatting down to analyze the squad of wayward /heroes/.. The shorter, smarter ogre seemed to take charge with the situation. Der remained on edge, gripping then handle of his weapon and watching cautiously should anything take a turn for the worse.

”You may enter, but the humans have to empty their pockets.” Brud slowly rose back to a stand. He was confident that his extortion would be effective, because if these folk turned to violence they would have to enter through another gate. And that was not a good idea for strangers.

The orcess huffed and grunted as each of Barb's words met her ears, and her own brown eyes narrowed past youngest Comoita to the tiny fiend that schmoozed more money from him again. “You're not going to make it here with your coinpurse so loose.” her right hand opens and her cheek slaps into the palm, and stared straight to Barbatos with a stiff expression.

“That fat oaf isn't ever busy -- I'm sure there's a patch of wood in his office that bows inward right where his lazy rump sits, I'd bet on it even. But . . .” Yrga bounced her shoulders up into a shrug as interest in such a topic held little interest to her. But Barb did seem very pushy about it, she was even using that tone. A collector such as herself was used to devious types, but Barb did not color himself as such, so she trusted him just a little more than the rest of his ilk.

“I can’t get you in with him, but I do know someone who can.” She grumbles out as her hand slowly drifted behind her and unclasps the satchel fastened right above her ass. The green-skinned digits fiddle around for a few moments before finally she pulls something out and sets it upon the table between herself and Barbatos. Yrga stares down at the roughly hewn iron key, small bite marks present throughout every inch of it.

“That /there/ is a black key. Know what it’s for?” The look of exaggerated glee upon the orc’s face was quite comical, tusks pressing into her lower lip and upturning at the corners. “A door. What door though, maybe Rooster knows —- he is the don’s favorite after all.”
In 𝘌𝘮𝘣𝘦𝘳 𝘵𝘰 𝘈𝘴𝘩𝘦𝘴 - 𝘈𝘳𝘤 𝘐: 𝘏𝘰𝘶𝘯𝘥 𝘢𝘵 𝘵𝘩𝘦 𝘎𝘢𝘵𝘦𝘴 𝘰𝘧 𝘏𝘦𝘭𝘭 → 4 mos ago Forum: Casual Roleplay

Combat: •••
Although a capable fighter, Varathira lacks much in the way of formal training, taught how to fight by hard-bitten years on the road rather than by soldiers and generals. She understands little of how war is actually conducted, and about as little of formal fighting techniques; instead, she is best described as a brutal brawler,.effective yet untrained.
Culture: •••••••
Well-traveled and decently well-educated, Varathira has a solid understanding of the world and its people.
Commerce:••
Money, in Varathira's words, is a stupid waste of time. It's a way families like hers control the less fortunate, and she prefers to have as little to do with its proliferation as possible.
Magic:•
Although a potent holder of Justice, Varathira's circumstances have prevented her from truly understanding it, leaving her with an blunt understanding of her Arcana. She's fully willing to learn more, but so far has had barely any time to do so.
Survival:•••
Thanks to her travels, Varathira knows what she needs to survive in the wilds, but lacks knowledge of how to do much more than eke out that incredibly meagre existence.
Karma: ••••••••
Strikingly beautiful, handsome, and practically glowing with joy, Varathira is easy to like at first glance, and is usually friendly enough to play that out. She adores talking with nearly anybody, rarely judges, and spends much of her time in towns flirting and enjoying drink with the local women.

Bantering At Gates of Goeta, There's Much Butter Things We Could Be Doing?!
@Spin The Wheel@vietmyke@Abstract Proxy@Katakuri

By all means, this group was quite a mixed bag. The fire-haired demon scanned his eyes across the chaotic group, looking first to the ones who approached the ogres and opening his mouth to speak.. but indecipherable nonsense escapes his maw. The small white-masked figure was already going on about stories of his heroism, the auteur as the eldest presenting human approached with confidence, and the madman? He honestly seemed to be the least of the Farfa's worries. But already was the thread weave that kept that cart ride so peaceful starting to fray. And then his mind would return to the moment, longing for it wander once again so he could be home.. home was so comfortable.

"The plan, is to get inside. Anyone who doesn't look like a human can walk in so long as we don't piss the ogres off. Just--"

The spoiled half-elf's words snapped one of those fraying threads, and you could visibly see it do so as the demon twitched as the Galahad's second question met the demon's ears. A plastic smile spread across his tanned features, squinted cheshire eyes aimed right over to him as he pointed a clawed fingertip towards the once knight and then in the direction of Lumen, Germaine, and the madman near the gate's entrance. A deep breath was drawn in through his nostrils, swelling up in his chest as if he were about to exhume a loud 'Fus ro dah!' but abstained from blowing up on the man with indecipherable infernal language. And instead released a calm and friendly sentence.

"You are quite eloquent with your words Ser Galahad, might you go and speak with the ogres -- try your hand?"

The cheshire eyes would remain, but ever so slowly the smile across his lips would melt into an indifferent stiff expression as the demon's gaze fell first to the youngest human of the group. Farfa burns a very cautious stare upon her before looking to the elf speaking to her, and then to the violet-skinned elf, none of which were helping the situation very much. Both hands floated up to cover his face and a loud sigh muffled by each palm grumbled through.

"And to think that there are members of Barb's family that were turned away by the Order.. only to send... /this/... "

Farfa's hands drip off his face along with streams of water as the rain develops from a light sprinkle into a more consistent shower. The everburning strands of hair atop his head sizzles and hissed as moisture set into the mane of hair atop his head, and his mascara bled down from his eyes to his cheeks. Then he would look to the moon elf and stated rather ambiguously, "Perhaps he will drown us. But I think it may be a little too early for that, they are said to enjoy a one-sided struggle before sending opposition to the grave."