STATUS: it's been years since I've been in this site. 1 yr ago

1 yr ago
Current it's been years since I've been in this site.
4 likes
6 yrs ago
Oh JEBUS! These Bots are invading the entire sight! Oh no!!
3 likes

Seizing the chance, Grey lunged in at the opening provided by the distracting Shantae Monke and grabbed the belt with its bare paws. Undoing it is the hardpart, though. There doesn't seem to be an opening for the belt to be removed from, all that's left though, is the buckle. And is a whole other story.

Sparks fly and lightning seem to course around the buckle as Grey attempted to remove the belt directly. It seems to be latched in place--some mystical force keeping it there. Although the watches on the sides of the belt were different. During the struggle, they appear to shake, slowly sliding themselves off of the buckle itself. Before they can do so, however, Grey had indeed, managed to remove the belt by just yanking it off, causing Sougo's suit to explode as Grey and the Monke was sent flying. Sougo's armor glowed pink as it dematerialized, returning Sougo into his civilian form, now unconcious and laying on the ground.

Whilst airborne, Sougo struggled to get the pesky monkey off of him, soon falling onto the ground doing so. At the time it took for him to fall, the rest of the group had managed to take care of the Hatter's goons--except for Sougo, who had now started to swing his claw wildly, hoping to shake the monkey off of his body.

After ensuring that the Hostages were safe down at Spider Man's web, Penny returned to see quite the scene. For one, there seems to be a gaping hole on the ceiling now, along with the appearance of a blue haired feminine figure, who had summoned a cute looking black creature, reminiscent of a snowman, in order to assist Cole.

Still, with that remaining thug lying dead on the floor, Penny could only assume that their interrogation went well. Not that it was a method she could've approved of, but...She wasn't able to stop it. From what she heard while flying back up, it seems that this blue haired fellow expressed that feeling for her. A life snuffed for the sake of justice is still a life lost.

Regardless, there was one thing that can be heard in the aftermath--a thumping on a nearby closet.

"Could that be anyone else?" Penny asked aloud, heading towards the closet that seemed relatively unharmed, using her thermal vision to check for heat signatures.

As he was restrained by both the Monke and Grey, Sougo struggled to move, trying to shake the two off of his body. However, it seems that the source of their hypnosis is revealed--it's the mask. However, the problem with this is that Sougo's mask isn't something that can be removed easily.

"B...Belt..." Sougo's voice strained, as if struggling to fight against the tea's hypnosis. "Take it...Off...!" He groaned, but with a sudden sharp breath, his will was once again silenced. They may have restrained his arms, but they didn't restrain the one part that makes a Rider strong--his legs.

Crouching, Sougo soon launched himself onto the air using the OOO Armor's Hopper legs, taking the Monke with him as Grey moved onto taking off the minion's masks. Airborne, Sougo attempted to shake off the monkey clinging onto him
In ArcRift → 5 days ago Forum: Casual Roleplay
--Zi-O OOO Armor--
Interaction: @Thatguyinastore @Second2Last @Attesa @davefromdiscord @Paper94 @Crow @TheElenaFisher 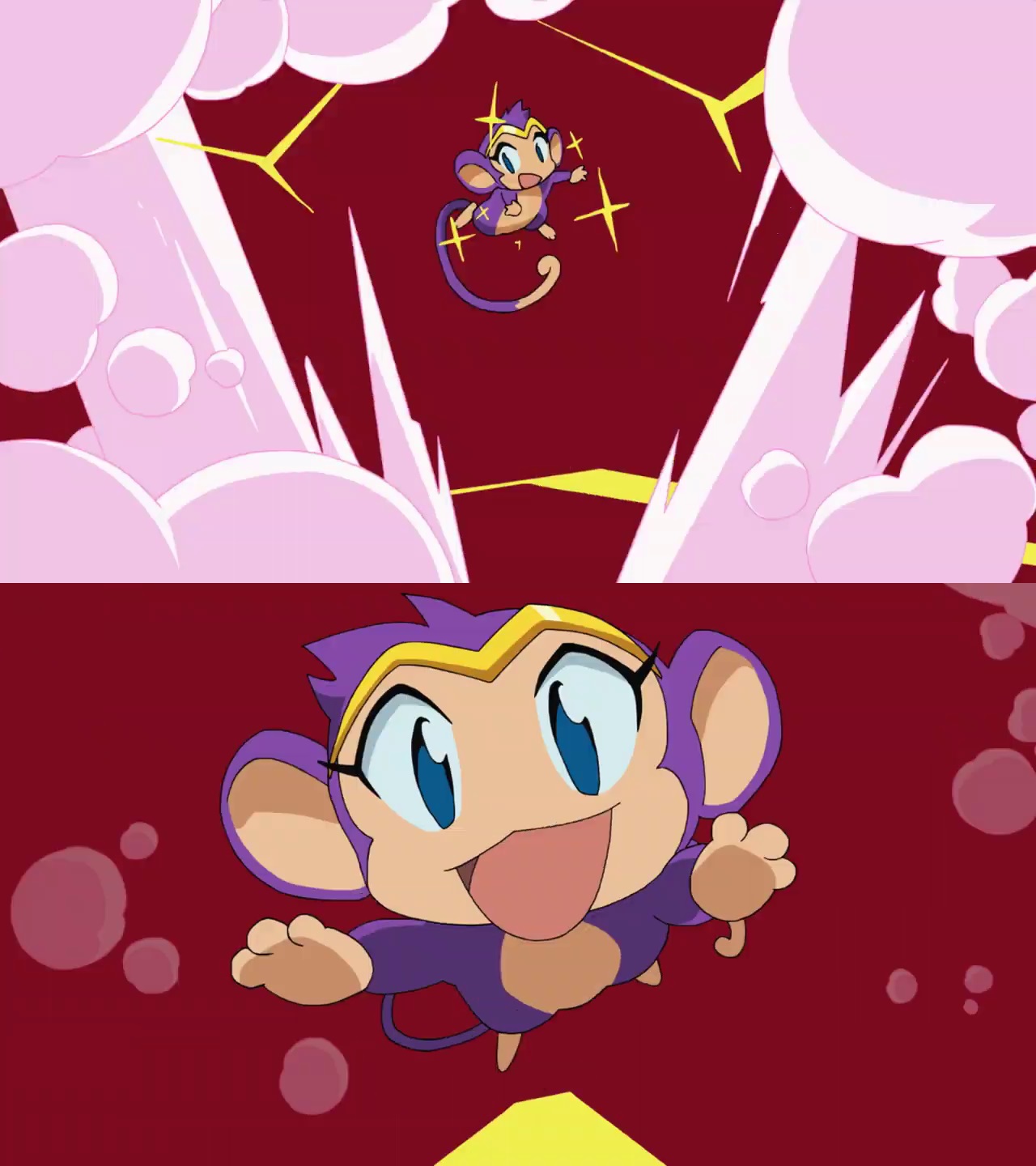 Sougo's assault was directly interrupted by the sudden blinding attachment of a purple monke on his visor, which caused him to trip on his lunge, dropping his weapon as he stumbled, grabbing and pulling at the monkey, trying to get her off of his head.
In ArcRift → 5 days ago Forum: Casual Roleplay
--Zi-O OOO Armor--
Interaction:@Thatguyinastore@Attesa@Second2Last@TeapartyGoneMad
Sougo's advance was met with the charging stampede of Shantae The Elephant, which forced the Kamen Rider stumbling back, drawing out his sword on his other hand. Using his hopper legs, he leapt high above Elephant Shantae's advancing path, Sougo turned the blade and folding it onto the hammer-like part of his blade, a gun muzzle appearing underneath the folded blade, transforming the sword...

Into a gun. As he landed, Sougo aimed the gun at Grey, who attempted to communicate, telling Sougo that he's being mind controlled.

". . ." Sougo was still eeriely silent, and with a ruthless demeanor, he fired his gun. Plasma shots shaped like clockhands were fired off of the gun--yet he missed. One's keen eye may notice that his arm is shaking, almost as if he's slowly trying to fight back. Yet the tea's hypnotic effects are still at large. And so, the Kamen Rider lunged at Grey once more. Claw arm raised as he fired a volley of avoidable shots.
In ArcRift → 5 days ago Forum: Casual Roleplay
--Zi-O--
Interaction:@Thatguyinastore@Crow@Paper94@Attesa@Second2Last@davefromdiscord@TheElenaFisher

Uh oh. Maybe Sougo shouldn't have given in to his thirst. Hearing something about a plan, Sougo placed the cup down just as the ghost girl destroyed one of them. Just then, the figure hopped onto the table, revealing himself to be a short man, cosplaying as the Mad Hatter from Alice in Wonderland. In a blink of an eye, everything went dark.

The group found themselves in what seems to be a giant stopwatch.

"What the...?" Sougo gasped as he glanced around, wondering where exactly are they when the rabbit masks appeared once more. Sougo took out another watch, a green and yellow one, with what seems to be a red bird-like mask on its face, bearing large green eyes. As Sougo was about to don one of his armors, he felt something...Knock at him. Pushing him to turn and face his comrades. A gentle and subtle voice, telling him to attack--and betray them. And so, the grandfather clock chimed as a different kind of armor manifested onto Zi-O--this one, comprised out of 3 differently colored animals. Latching onto Sougo as if some kind of megazord, the green giant grasshopper formed the legs, the yellow tiger formed the torso, giving Sougo a yellow claw, and the hawk as the visor. Pink letters spelling out the word 'OZU' on its visor. 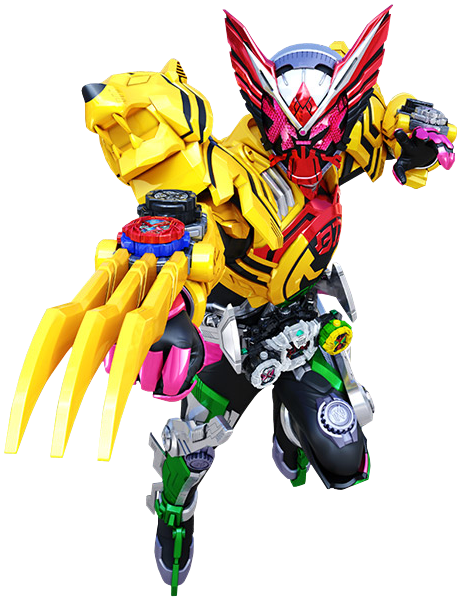 "Oh, uh...Thanks." Sougo nodded upon hearing the perpretator's compliments. Although his comrades were adamant that they wouldn't play along, something tells him that they shouldn't anger this guy. Who knows what he'd done to those men? Those seemingly statue like men in bunny masks, all sitting there like dolls. Unmoving, staring at each other rather lifelessly. It's...Quite eerie.

Something about this feels familiar to the young Time King. A white rabbit, and a tea party...All that's missing is the Hatter, and this would be referencing Alice in Wonderland!

Still, Sougo lifted the tea and brought it onto his mask--where the lips would be. When he was taken from his world, Sougo...Hasn't had dinner yet, so he's understandably parched.

"Just one sip." Sougo mumbled, bringing the rim onto his mask. Surprisingly, he can still drink things through his suit. "Oh, right. Do you know about Superman? The one who kinda, sorta demolished this building?" He asked, thinking he might as well get some information about their target.

Penny's distraction worked...Sort of. While she did get the attention of the thugs, she did inadvertedly put some of them in danger, being placed in direct, point-blank gunpoint. Before Penny could try to negotiate to them, her comrades moved in for her in a rather...Brutal manner. Those men who placed some of the hostages in gunpoint got their hands sliced off, while the others were electrocuted by what Penny could only describe as something akin to a Semblance.

Regardless, Penny would soon move in to the hostages, asking them one simple question. "Are you alright? Can you stand?" She asked each and everyone of the hostages as the others interrogated about their supposed involvement with Superman. Although, surely enough, it seems that this hostage situation didn't involve the caped tyrant. Once all of the hostages were accounted for, she would prepare to fly them a bit down and dropped onto the red clad spider's safety net.
In ArcRift → 6 days ago Forum: Casual Roleplay
--Zi-O Wizard Armor--
Interaction:@Thatguyinastore@Attesa@Second2Last@Crow@davefromdiscord@TheElenaFisher

Entering the room at the end of this seemingly long hallway, Joel opened the door. As the group entered the room, they were greeted with darkness. As one of them lit a flashlight to see what was going on, the lights revealed something...Bizarre.

It's a dining room of sorts. With a long, mahogany table decorated with a white table cloth. Sitting on them were several men occupying both sides. Clad in bunny masks, sitting in eerily perfect posture. This gave the young Time King a shiver down his spine. It's freaky. Almost out of a horror movie, this was.

The voice then demanded the group to sit down, and seemed to dodge all the questions. Guess they have to play along for now. Sougo made his weapon disappear, removing the Wizard watch from the left slot of the buckle, forcing the armor to disappear. However, Sougo still remained suited up as Zi-O. He doesn't feel comfortable revealing himself to this maniac, especially since it looks like having masks is a part of the dress code.

Kamen Riders are called Masked Riders when translated, after all.

Sougo had sat beside Grey, and grabbed a teacup. Sniffing its aroma before glancing about, trying to match the seriousness of his comrades.
In ArcRift → 6 days ago Forum: Casual Roleplay
--Penny Polendina--
Interaction:@Thatguyinastore@Crow@SomeMekBoy@FactionGuerilla

"Salutations, gentlemen!" Penny greeted right after hearing the gruff sounding superior's orders. She floated towards the ledge, and touched down on it with a slow grace. Penny hoped to gain the attention of the masked thugs--a distraction, as Cole would've put it, and make sure they don't hurt anyone. "Would you be kind enough to let these people go?" She asked, motioning to the hostages with a somewhat kind and warm smile. Which would seem scary, considering she was the one who carved the hole in the wall.
© 2007-2017
BBCode Cheatsheet