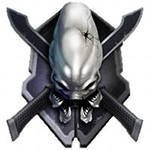 "I wonder... are you sleeping as soundly as you seem to be?"

The words echoed into the slumbering Majin's mind, the sudden thunder of a shockwave going barely heard at the moment. This had been the second time she had fallen asleep in such a short amount of time. Maybe this whole multiverse in peril was getting to her, or something like that. Her brows twitched lightly, slowly opening her eyes to find herself on a couch, with a blanket on her.

She blinked, a little confused as she didn't remember laying down on a couch, nor having a blanket. In fact she didn't remember falling asleep to begin with. Sitting up she looked around the room before reaching out with her senses. She nearly immediately found one of the mortals was nearby, in the next room even.

The last thing she remembered was walking into the building, thinking back on the Kais of her home. The Majin's brows instantly upturned, a saddened look on her.

'The mortal must have found me and put me on the couch, very kind of them.'

Eve smiled softly, she then did a little stretch before shuffling out from under the blanket. Standing up she felt refreshed, seems that sleep did her some good.

Eve heard the mortal's voice from the kitchen, the Majin walked into the kitchen seeing Velona.

"If what happens again?"

She asked with a smile, trying to keep herself sounding optimistic.

Sleep, Eve had slept before, at least she thought she did. But she was told by the kais when they woke her that she had been asleep for millions of years inside her ball. This gave the Majin quite a few concerns as she watched the others wander off to find a place to rest. While everyone settled in for the night the djinn wandered throughout conton city, it certainly wasn't the nicest looking place, the damaged structures, scorch marks and piles of ash didn't do it any favors. About an hour had past while the others slept, the Majin was walking up the side of a building, looking at the ruined city, as she stood in place a part of the wall she stood on gave way, taking her with it.

Eve blinked before looking down, seeing the ground quickly approaching she hopped off the chunk of wall and watched it crash into the ground.

She rubbed her head with a small frown, the tragic appearance of the city certainly wasn't going to boost any moral. A thought came to mind and the majin smiled lightly. She floated down to the newly made rubble before holding her hand out to it. With a bit of focus it lifted off the ground and clumped together in a ball of debris, Eve's central head tentacle stretched and aimed at the debris before a pink beam fired from it, coating the debris in pink energy. The rubble then transformed into a blob of grey clay, the Majin smiled widely before she flew up to the spot on the building that had lost a part of itself, using the telekinetic hold she had on the claw she had it fly into place before she pat it down and molded it back into shape.

Eve said happily as she looked over her work, the color was a it off, but it looked like it'd hold strong, it was better than nothing. She then looked the rest of the city, some parts still had smoke coming from them. A glimmer shone in the Majin's eyes before she began her little project.

When daytime came, the Majin was sound asleep on top of the Academy, she had been up all night doing her best to clean and patch up conton city. Her eyes opened and she rubbed them, having slept for about an hour. Letting out a yawn she hopped to her feet and stretched before looking to the city before her, a smile growing on her.

The city and other areas around it, indeed looked to be in a better state, most of the damage had been fixed, though it definitely looked off as all damaged areas were patched up with grey hardened clay. Fires had been put out, piles of ash had been blown away. It looked rough, but otherwise okay. The clay should probably be replaced with something more structurally sound at some point, but it'd hold for the time being. Seeing two of the mortals she had met down below and the Supreme Kai. She smiled before sitting on the ledge of the Academy's roof, lightly kicking her feet.

She called out, sounding in better spirits than the day before, giving a wave to Maize, Mia and the Kai. She looked to see Darbin arriving in the distance before looking down to the the other two on the academy grounds.

Eve said cheerfully holding her arms out above her in a 'tada!' fashion, smiling widely like a child who had made their parents a drawing which was then placed on the fridge. The Academy had damaged patches repaired with hardened clay, it didn't look pretty, but it did look better than before.

Are we talking about the same Dragon Ball Super? The same Buu? Because I remember the one where Buu went to sleep and couldn't be woken up for days at a time, and screwing Universe 7 out of having him on their team for both Tournaments he was needed for.


Yes, the very same.
In Dragon Ball: Shattered Worlds → 2 yrs ago Forum: Casual Roleplay
Hehe yes yes Super/Kid Buu have fallen asleep in the short pauses between battles, at most a Majin needs a few minutes to be fully rested.

If your going by Dragon Ball Super, Buu according to Mr. Satan, only needs one second to sleep to be fully rested, rarely ending up sleeping for a month or two at a time.

Going by Super's logic, I'd suppose a full ten minute rest per day would be more than enough for a Majin to be fully rested without worry of suddenly falling into a two month long slumber.
In Dragon Ball: Shattered Worlds → 2 yrs ago Forum: Casual Roleplay

Yaksha: What, you guys can't materialize a bed with magic?

The Majin blinked a few times, a slight frown growing on her with what she heard, a little disappointed. So just because she wasn't a Saiyan she couldn't change her hair color? She stared blankly in a moment of realization, it made sense in a way, looking at the mortal before her, their hair and skin were different colors, transformations aside. Yet her own hair and skin were hard to tell apart, one in the same. If she was able to transform like the mortal before her, would just her tentacles change color or would her entire body change color?

Picturing herself as any other color than pink, be it gold or blue, red or white, the image didn't make sense in her head, she was pink. She had a chuckle to herself. She smiled happily, listening to Maize, at the idea of her having her own transformation, she raised a curious brow, her mind wondering what such a transformation would look like. The Kaioken didn't count as a transformation did it? It turned her aura from pink to red, her skin taking on a red tint to it.

Eve briefly gave it a thought before letting it fade as Maize finished speaking.

The Majin looked puzzled for a moment, grow stronger? She could get stronger? And dig where?

'Once you do that come fight me.'

The puzzlement faded that moment as her mind derailed.

The mortal wanted her to fight them? Why? The Kais only wanted her to fight Moro, they never said anything about fighting mortals. She felt a little conflicted at the idea, not sure what to make of it. She didn't like fighting Moro, would it feel the same fighting someone else? or could fighting someone else be fun? She didn't have a way to tell. She smiled a little nervously to the Saiyan, giving the a small nod.

Eve said, her voice unsure, timid, but her smile showing she was willing to give it a try when the time came. She glanced over to the Supreme Kai, her posture relaxing a little, their was a faint look of hurt in her eyes but she held her smile as she wandered into her thoughts.

'Moro's not here, you're safe for now Supreme Kai... And if he shows his goat mug around here, I'll do everything I can to protect you... I promise...'

At that moment the Majin felt something, sort of empty, she looked to her stomach as it lightly grumbled. She looked to the others, mortals needed to eat right?

Eve asked with a smile.

Outstanding to hear Chev. ^-^
In Teen Titans: A New Era → 2 yrs ago Forum: Casual Roleplay
Sadly everyone, aside from a select few, haven't been online since the guildfall. ^-^;
© 2007-2017
BBCode Cheatsheet