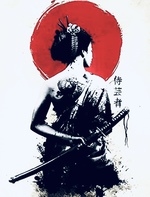 A little about me…
• Female (She/Her)
• Twenty six years old.
• An American born Eurasian.
• Pacific Daylight Time (GMT-7)
• Casual & Advanced are my vibes.
• My writing interests are manifold in genre.
• I tend to prefer 1x1’s but I never shy away from a good group RP.
• Ask for the Discord.

• Fallout : Hand of the Legion Fallout 1x1 roleplay with @Andreyich.

• My catalogue of characters. (The new one.)

• My old/original catalogue of characters.

In The Council Will Decide Your Fate → 11 hrs ago Forum: Spam Forum

I defy the council and all it stand for.

Resist.
In 𝕮𝖗𝖎𝖒𝖘𝖔𝖓 𝕮𝖔𝖚𝖗𝖙 → 3 days ago Forum: 1x1 Roleplay
The third man, whom had tried to flee while Theodor was feeding on his fellow hunter, had not even made it into the shadows past the campfire. Casna took upon him from the front, seizing ahold of his chin and forcing his head back at a sickening angle with a sharp crunch. Casna gently lowered him to the ground and then fluidly drained his life essence from his very exposed jugular, her body electrified by the sensation, this one was healthy and strong and his blood showed - or rather tasted - of it. As Theodor stood up from his own meal Casna slurped the last of the crimson nectar from her own victim’s throat, it dripping from her lips as she raised her head up from the drained corpse. Using her thumb and index finger she reached up and with a sickening smile drove them into the dead man’s eyes, rupturing the two orbs encased within their sockets. The two eyeballs burst and coated Casna’s fingers with jelly-like red pulp.

“I always like the little ‘pop’ they make.” Casna tittered cruelly as she wiped her fingers throughly on the man’s tunic. “Like grapes.”

Casna stood and dusted off her dress, wiped her mouth, and looked to her companion with a slightly indignant expression, “Though maybe next time we could draw it out? I had a whole scene played out in my mind, you see. And I have always enjoyed a good chase through the woods. Killing them so quickly is never any thrill, Theodor.”

Casna knelt back down, careful to keep from getting back down in the dirt. She began running her hands along her prey’s tunic, searching him over for anything to to be kept. She checked his fingers but found no rings and his pockets were empty as well. Annoyed Casna spit on the pallid body with a hiss and brushed past Theodor, kneeling once more to check the first man her partner had killed. Unlike the first he had a few little things on him, a silver wedding ring, a pouch of coins, and a copper brooch in his pocket. Tossing the coins away into the brush with a resounding clinking Casna slipped the ring and brooch into her dress for keeps.

“That one is your pick.” Casna indicated towards the man at Theodor’s feet as she knelt to drink from the first corpse which was still filled with blood. Sinking her teeth into the hapless fool Casna found him less savory than the first but adequate enough, at least she would get her fill this evening. She was still a bit annoyed at Theodor for so swiftly ending the men’s lives and depriving her of any glee to be drawn from chasing them through the forest, their breaths ragged and hearts pounding as they fled from the undead devils at their backs. But she decided best to get over it, there would always be more kills and entertainment to be drawn from them, there was no sense in being cross with her longtime friend.

I anticipate adding to the story tomorrow...or Sunday.