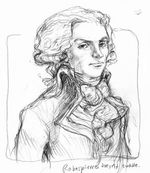 4 yrs ago
Yes! I've been accepted into the University and course I was applying for!!
5 likes
4 yrs ago
Be sure not to become what you hate. I used to hate those who abandoned RPs without a word and then I became one of them, a lesson to us all
5 likes
5 yrs ago
Yes, when I said before "Han kills luke" I really just meant that he commits suicide because Princess Leia was cheating on hom with Kylo Ren
1 like
5 yrs ago
@Flightless_Soul What? You didnt want to hear how the Ghost of Darth Vader appears and sppoks the shit out of everyone?
3 likes
5 yrs ago
Han kills Luke, the First Order has solar power weapons and Kylo Ren becomes leader of the resistance

Prone to vanishing for a indeterminately long time without a word. Guaranteed to crawl back into the guild at some point and act like nothing has happened.

In The Dark Brotherhood → 3 yrs ago Forum: Free Roleplay
Aenor stepped out of the portal into the sanctuary. Cold. Was her immediate thought as there was a noticeable difference between the two locations. She looked at her now visible breath and the faint mist that lurked around the floor of the building, even for Skyrim this was a bit much. She turned and looked at the others enjoying themselves. It might be cold in the air but the warm personality of Carva and the fiery intensity of Gur almost made up for it. She scolded herself for being so sentimental about people she literally just met and walked over to the table and sat down. She took a cup of... Colovian brandy according to the taste and remembered she hadnt actually introduced herself "Oh I'm Aenor by the way, but my friends just call me Aenor."

A vampire, a daedra, an unfunny girl and their cat. Oh wonderful, Alaus sighed. As if the place wasn't full of fools already, four more had to pop out of his portal. Well, they were apparently going to be a family now so he decided he may as well get acquainted with the sods. "Yes... Hello dear" he replied to the Breton. He looked at her more closely. Hmm. Odd. Alaus couldnt put his finger on it but it was almost like they were made by the same person. Impossible of course. As he was a pure bred mage from Summersets finest, while she was a disgusting Half breed. It was disconcerting and he would have to consider the Metaphysics of it later but now was not the time. It was time for another bottle "Carva! Be a dear and start another round"
In The Kings Council → 3 yrs ago Forum: Free Roleplay
@HushedWhispers Ah, sorry about that
In Mages of New Edis → 3 yrs ago Forum: Free Roleplay
Josselin walked from his home to the IMFO, as it was only a short distance and he liked the fresh morning air anyways. Walking at a Not-quite-a-skip-but-almost-a-skip pace he quickly arrived at the West gate as instructed. To his surprise, but of the delighted variety, he saw a small crowd of others already at the gate. He thought he was going to be early, but not matter, this was now just a chance to introduce himself. "Hello!" Josselin said with a wave to nobody in particular, expecting one of the rest would indulge him in conversation.
In The Kings Council → 3 yrs ago Forum: Free Roleplay
@Kassarock Still interested?
In The Kings Council → 3 yrs ago Forum: Free Roleplay
@HushedWhispers Good idea, but theres still a chance others might pick this up eventually. SO for now i'll leave this up.
In The Kings Council → 3 yrs ago Forum: Free Roleplay
King Tarquin VI of House Heartwroth walked through the pristine marble halls and ornate decadent rooms of Nighthaven Citadel with a small entourage of advisors behind him trying to catch his attention with state matters. While important, they weren't on Tarquin's mind at the moment as he was taking it upon himself to inspect the rooms of Nighthaven to make sure everything was suitable for his guests and the plans he had for them. Of course he didn't need to do this himself and he was assured many times that everything had been made suitable, Tarquin nonetheless decided that since he had spent a large amount of the state treasury on Nighthaven, as well as man other personal projects, he should inspect everything for himself.

"Sir" Arthur Wraith, the King's right hand and Chancellor, was one o he advisors trying to get his attention. Tarquin trusted Wraith with his life as he had served his father and the kingdom faithfully for many years. But he was far too busy at the moment for whatever the man wanted to tell him.

Eventually Tarquin gave in "I'm busy Arthur, what is it that you want from me?"

"I just wanted to inform you sire that your first guests will be arriving in an hour. I recommend that you change from your morning court attire into your introductory court attire."

"Ah, thank you Wraith. I'll go now and then await our guests"
In The Dark Brotherhood → 3 yrs ago Forum: Free Roleplay
"Yes... indeed" Aenor said with a cautious smile "Well it's a pleasure meeting you Dragos, I'm sure we'll get along famously. Or infamously, considering our line of work and the pair of you being big bad vampires." Although considering that they work in the shadows and everyone they met ended up dead, fame may be a little hard to acquire. At least for them individually, she had no doubt that word of the Brotherhood as an organization itself would spread like wildfire soon enough. Although luckily for Aenor fame wasn't something she had ever been particularly interested in. Turning to Alexi she said "Speaking of big bad vampires when do we leave and go meet the rest of our little family?" The family was turning to be quite larger than first impressions made it seem, Aenor thought pleasantly surprised.

Alaus was going to comment further and make more disparaging remarks to Gur until Kraven came in. Afterall, his name was Alaus but the fact remained that he was also a pure born Altmer. And he might be called 'Gur', such a stereotypically savage name, but he was also one of the Orismer whether he liked it or not. Regardless, he drank down the rest of his Colovian while Kraven discussed that his sister would be coming to Dawnstar with the other half of the Guild. Bother. The place was going to end up rather cramped with people. Maybe one of them migh be a mage. Perhaps one of them has respect for the old ways. It was a stretch and Alaus knew it, he had been disappointed by his fellow mages for the last several hundred years and knew what to expect of them by now, but still the hope remained. With that faint hope he sighed "I look forward to meeting them'.
In Mages of New Edis → 3 yrs ago Forum: Free Roleplay
Here, just not sure how to proceed
In The Dark Brotherhood → 3 yrs ago Forum: Free Roleplay
"Ohhhh..." Aenor murmured as she trailed a few paces behind Alexi and her new brother Dragos, realizing that the pair were a bunch of vampires. Well that did make sense she supposed, or at least it did explain the glow of Alexi's eyes, the hunger she sensed in them. Hmm it would be extremely convoluted and rather serpentine if this was all an elaborate plot to lure the unsuspecting and then feed on them. Too convoluted and elaborate that it didn't make much sense, as the pair could certainly take whatever they wished if looks were anything to go by. No, she had no doubt that she was a proper member of the brotherhood and that the pair wouldn't decide to eat her out one night. Still, a little precaution never hurt.

"Ambitious. Daft. Interesting." Alaus said to Carva as she explained the plans of the twins. Taking all of Tamriel would have been highly ambitious even if the guild was in its glory days, but to try and do it while they were in such a miserable state? Well that was just folly. No wonder they asked for his grand expertise.

Alaus turned to the new voice enter the room. Oh, an Orc. Charming. Alaus could recall the time when they were still considered to be wild animals no better than Goblins or Trolls, before that bastard Gortwog and the Warp in the West. A better time, everything was better back then, Alaus sighed. "Yes you're right I won't be needing your services Orsimer" he said a little condescendingly and then turned to Kraven "Carva has just been telling me of your plans to reestablish the Guild to its former prestige. I propose a toast then. A toast to restoring the old ways. A toast to better days." he said raising his cup.

@xXSINXx@DragonofTheWest@Saarebas
In The Kings Council → 3 yrs ago Forum: Free Roleplay
@Hazy@HushedWhispers Both great characters, go ahead and put them in the character section

@HushedWhispers You're welcome to make that count character, but don't feel pressured