STATUS: just made the most generic npc and calling him mook im cryin 4 mos ago

helloa v i a i r ehello
the assumption that i know what i'm doing is a bold one
time zone: GMT

Please check out my RP!

Well, actually, it was very early. Just past 6am. But for her, that was much later than she was supposed to be up. The harsh vibration of her phone woke up her up and she became acutely aware that every part of her body hurt, and she was currently on the floor. Chances were that she had been for the entire night. With a groan, Anna attempted to pull herself up, with little success. She dropped back to the floor. Instead of getting up, she just hit the answer button on her phone and then put it on speaker. She could still talk, even if she had one cheek pressed against the floor.

“Anna! Anna, where are you?” came the voice through it. Anna groaned, finally sitting up. It was, pun not intended, a bit of a wake up call. She had work today. Right. “I’ve been calling you for ages! What are you doing?” She checked her phone to see that she did, in fact, have a good fifteen missed calls. Anna groaned again. She wasn’t really bothered.

“Right, you get over here as soon as you can. We have tons of customers in the morning and I’ve had to-“ The phone beeped as Anna accidentally hung up. Grumbling, she pulled herself to her feet, taking in her surroundings. She was in her kitchen, taking a nice nap on the floor. Still sore, she dragged herself to get ready, still half asleep. Anna didn’t even stop to question why she was on the floor. She had just accepted it.

Despite being late, she went through her morning routine slower than usual. Perhaps it was because she didn’t have to worry about being ready at a certain time. Or maybe it was because she just didn’t care. It was thirty minutes since the call that she appeared at the shop. ‘Bean & Gone’, the sign read, with an accompanying chalkboard written in Anna’s chicken scratch handwriting with Anna’s horribly sarcastic and unfunny remarks on it. She kicked it, but it stood firm. In fact, she’d hurt her foot.

Now scowling at the board, she walked in, hearing the bell chime as Anna pushed the door. There weren’t too many people in there, thank god.

“Oh, Anna! There you are. Get over here,” and all of a sudden she was being forcefully escorted behind the counter. “I can’t believe you. You’re always late!”

”Always? This is the first time I’ve been late in what, three weeks. That’s ages. You should be congratulating me, really,” Anna replied. She picked up a note on the counter (with Jasmine’s stupid, legible writing), nodded, and busied herself with the drink. Better than listening to what she had to say.

“Three- I’ve never been late in my life! What were you doing!”

Anna thought about it. She thought about why she’d been on the floor. And she remembered falling over the night before, then somehow, it slipped her mind as easily as it had come to it. She was still sore, as a matter of fact, and she stretched her neck a little, wincing.

“Of course you don’t. Right. Once you’re done with those drinks, or when you take a break, I want you to redo the chalkboard - thank god no one can read that, because I don’t know why you wrote it - and make sure it’s legible. Leg-i-ble. Okay? Good.” 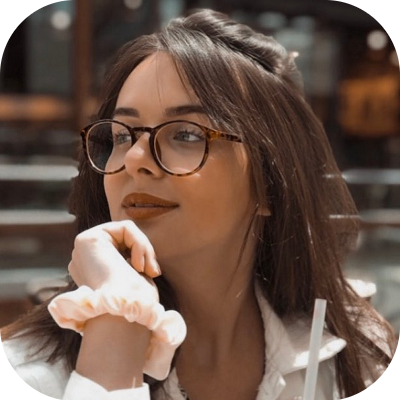 helos p e c i a l s k i l l shelo
helob i o g r a p h yhelo
The Shaw family consists of three people: Anna, her sister, and her father. As for her mother? Divorced her father when she was young and ran off to god knows where. At least she paid child support. It wasn't really anything to be upset about though. They managed fine, and still are.
It was Jasmine's idea to start the coffee shop. It had been her dream, or something cheesy like this. Anna just really liked the sound of a free job, and was so unbothered that she didn't protest. It was alright though, because she turned out to be good at her job. So now she's still unmotivated, just doing a little better than she had before. For all of her complaining though, she really does enjoy her job. Will she ever admit it? Absolutely not.
helob e a n & g o n ehelo
Get your caffeinated drinks and go to work slightly less dead inside for only $3! A coffee shop owned and ran by Jasmine Shaw and her younger sister, Anna. The menu isn't very big, but it's common knowledge that pretty much anything off of it is fair game to order. There's a selection of baked goods to accompany your meal. The coffee is great, but the same cannot be said for the hot chocolate. It's best to pretend it doesn't exist, really.
Now offering non-dairy milk, but only the almond one, because there were too many and the budget is tight!
helor e l a t i o n s h i p shelo
ᴛʙᴀ
heloe x t r ahelo
In Mist City Story: An Urban Fantasy Mage RP → 11 mos ago Forum: Casual Roleplay
Effie sighed as she uncloaked them both. At least she could use less mana, but it was always a disadvantage when her magic was ineffective. She began to wonder if her other tricks wouldn't work too - but she decided to stay optimistic. Either way, she would find a way to win, and she had backup just in case. Magic or no magic.

She watched her companion as he dealt with some of the dolls. Well, she could do that too! Breaking away from Leo, she ran towards another automaton, slashing at its neck as she passed it. Effie wasn't too sure if they functioned the same way that humans did in terms of injuries, so she plunged it into its back for good measure.

She pulled her knife out, cringing a little at the sight, but persevered. Effie did the same to another automaton, injuring it the best she could, gritting her teeth as she used the admittedly limited amount of strength she had. Leonardo was looking further away than she would have liked.

That wasn't very good. So, she made it her next priority to get back to him, making her way back through the alley.

Admittedly, it took Talía a minute before she realised that the lanky one was referring to her. When she did, she tilted her head to look up at him, not blinking at all. She liked to think it was unnerving. She looked him up and down, taking in how he looked. She had thought low-rise trousers had gone out of fashion years ago, but as a northern harpy, she supposed she wouldn't be the best judge of that. His wings were interesting, looking draconic but not entirely so. Perhaps she could get a closer look later.

She sat there for another minute, watching him blankly as she had done for all the other students that had passed through the gardens. Eventually, Talía stood, drawing herself to her full height, which wasn't very impressive, especially compared to the man in front of her. She maintained her disinterested appearance, still not breaking eye contact, though she had decided to start blinking again. "I see you as I see everyone else. You are one to speak of gawking when you have just spent an hour sitting with your eyes closed. What is the point? I do not understand." She narrowed her eyes, examining his face as if to see his intentions.

"It is a... competition you want, then. But a competition is not fun if it is too easy to win." She ruffled up her feathers. "If you wish to act how you do, though... perhaps I will accept your offer. I think it will be fun." Talía paused for a minute, as if considering her options. "A battle would be best, but I do not want to injure you too much. Such lovely wings, it would be a shame if they were hurt." She really was having more fun with this than she probably should have been. "If you still want to... then it will be a learning experience. I will teach you some manners."

Talía turned away, feeling rather smug, but maintaining her cool expression. "Shall we go, then? Unless you are feeling ill all of a sudden."
In My Hero Academia: Another Story → 11 mos ago Forum: Casual Roleplay
Eira Winters ❄ Antartica
@OwO@Ryonara
"Alright then. I'll go follow after Damian, you come too. If there's anything you wanna do, get it done now because I'm not sure you'll get the chance until tomorrow. It seems we'll be missing this afternoon's classes," Eira said to Judith. She picked up her bag, wincing at how heavy it was. So much useless shit in there. But she wasn't the one who put it there, of course. She slung it over her shoulder before walking after Damian at a leisurely pace. There was no rush. They had the whole afternoon to do their detective business.

As she made her way out of the school, she pulled out her phone. There was no harm in telling someone what she was doing. If anything went pear-shaped, it might come in handy.

message to Aidan Winters: Doing something. Don't ask what, but I won't be in for the afternoon lessons, so if the school calls home about that, then you'll know why. I will keep my phone on me. Don't worry, nothing too dangerous. Enjoy the rest of your day.
Maybe it was a little too vague to be of any use. But it wasn't like the three couldn't handle anything anyway. Eira had (some) faith in her classmates, after all. She also had faith that her brother would check his phone and hopefully tell someone if she disappeared for more than twenty-four hours.

Eventually, she had wandered onto the pick up lane. There was Damian, in his car, sitting on his phone. Eira wondered who he was calling - telling someone they where they were going, perhaps? Nevertheless, she walked up to him and tapped on the window a few times. "On your phone in the car, are you? Not very responsible."

She didn't ask for permission as she promptly opened up the back door and sat down behind Damian. "I hope that you have a decent plan for what we're about to do, because I don't. Judith might, I suppose. Let's just hope all get out of this in once piece."
In Groundhog's Day: Apocalypse → 11 mos ago Forum: Casual Roleplay
I imagine that the caffeine addicts among us would know Anna since she works at a coffee shop. She's the same age as Anthony so they could've been in high school together, which would also work for Freddie depending on when birthdays are. I don't think she'd ever be caught dead at the gym though. She's probably been to Mawmaw's at least once, but she could also know Jenny for other reasons.