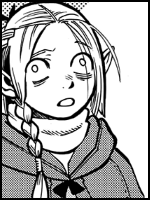 1 yr ago
God, why are cat buttholes so magnetic to the eyes.
3 likes
1 yr ago
Shop Authentic & Natural Loose Toenail Clippings outside in my trash cans.
3 likes

In The Wayfarer's Guild → 3 days ago Forum: Casual Roleplay

Her ear briefly twitched as she took her eyes off of the paper dog. What was this inscrutable feeling of an interesting magic being cast? An explosion came from inside of the room. Not loud or noticeable enough to cause serious harm to those inside, other than the poor person it was focused on. She briefly yelled at the other Wayfarer's inside of the room.

"I'm going to make sure Vera and the guard are okay!"

She pulled out numerous books from her directory tome, all bound different and titled with something self-explanatory. The Book of Book Destruction, The Book of Increased Weights, Housekeeping for Mages, Transportation of Tomes, and Paper and Preservation. However, these weren't the original prints of said books. No, these were all duplicates of what she had once written. The purpose was simple; they were disposable copies. These books formed an atypical loadout for combat.

Placing her hand on a page within the Transportation of Tomes, the six books she now had levitated beside her. Finally, she picked up the paper dog. Rather than letting it follow on the ground, she used the much more inaccurate method of holding it in her palm and feeling where it wanted to pull her. If the dog was pulling itself along the path that Vera was going, then the author may have already met with Vera. Either that or she was going in the exact wrong direction.

Well, she was ready for a fight either way!
In Cacophony Concord → 3 days ago Forum: Casual Roleplay

Well, she managed to get away from the oni. Turns out, they weren't quite as fast on their stumps as they were as their legs. She managed to make enough space to live, at least. Her health was low enough that making any sort of risky play was dangerous. It didn't help that the worms inhabited corpses. Having a possessed corpse Mags running down the rest of her allies was unlikely to help anything, so a suicide play was less apropos. That was, however, if her corpse lingered instead of being digitized. It wasn't exactly something she was willing to test right now.

So instead of ruining another tool, she just picked up some rocks to hork at the spin kicking oni. She wasn't going to lose her pickaxe. Not yet, anyways.

She would hold a funeral for her shovel at some point.
In The Devil Hunter Agency → 5 days ago Forum: Casual Roleplay

With glowing blade, Beniha cleaved bug after bug that came after her. This wasn't some kind of simple feasting. That's what her instincts told her. No, their movement was too organized for something as simple as that. There had to be something here. Something they were looking for.

With the sudden flight of Da-Xia and encroaching darkness, her suspicions could only be confirmed. This was too big for a simple hunt. Thankfully, the survivors had already fled thanks to Da-Xia's... personality. They had some breathing room to figure out what was going on and stop it, at least.

"Change in plans. Kaze, we're following the bugs." She ordered him. With one final swing cleaving an insect in half, her blade split into the feathers that once constructed it. Violently, they spun around her in a burning feather tornado as she sprinted at where the bugs were moving. They'd brutally cut anything that got too close.
In The Wayfarer's Guild → 13 days ago Forum: Casual Roleplay

After Sheri noted her sudden inspiration, she tossed the notepad back into the silver tome. She took the papers from the guard, giving a short bow in response.

"Thank you thank you."

After fumbling around some more, she finally pulled out a small book bound in an aged blue leather.

"Here we are, Magical Peer Review. If I remember right, the spell should be about... here. Find Author."

After placing both books on the ground, she placed one of the threatening notes on the open pages of Magical Peer Review. Though, this magic did have some prerequisites. Fold after fold, she turned the threatening notes into a much less threatening form; a mixture of folds, crumples, and bends contorted the paper into the form of a dog. Once in said form, the symbols on the tome began to spread onto the paper dog. It seemed to give the paper life, albeit a simpler form that consisted of disjointed movements and slides. Soon, it began to slide towards whomever the author was.

Mags was essentially at death's door right now. One bad hit and she'd crumble like a piece of toast. If only one of them picked healer. She would probably be able to live longer. Having the great idea of entering a fight with half health didn't help. However, her dangerous mind resulted in something besides the approach of death:

With her battlemask entering its inanimate frenzy, power coursed through Mags veins. This wasn't any ordinary strength boost; this was a 30% juicer. This wasn't the time for her gamer panic. She had to calm herself. Just a game. That's all it was. She just had to pretend she was one of those freaks with a pet leech. With the immense strength her body possessed, she flicked her hands and hair, a powerful motion to remove any stuck worms.

"Fuck worms." Her rant began. "Fuck the swamp." Her hands reached for the shovel she carried with her. Always on her, but never used. "And fuck you!" With shovel in hand and a stomp on the ground, her position was cemented. The fetid, swampy ground surrounding her had been replaced by a square sandstone platform. Bright ocean water displaced the muck that once covered the ground.

With a great swing, she intended to meet the oni's arm halfway. Only a shovel was standing between a missile of worm meat and her skull.
In Living Life as a Monster doesn't Sound that Bad - Another Isekai RP → 19 days ago Forum: Casual Interest Checks

What, did you leverage a connection or something? Just for a dunk meme?

getting called an artist puts unrealistic expectations on me when I just shitpost and play jackbox
In Living Life as a Monster doesn't Sound that Bad - Another Isekai RP → 19 days ago Forum: Casual Interest Checks

Wew, didn't know you were an artist, Burger.

Neither did I.
In Living Life as a Monster doesn't Sound that Bad - Another Isekai RP → 19 days ago Forum: Casual Interest Checks

Funniest? How is Newt not funny? 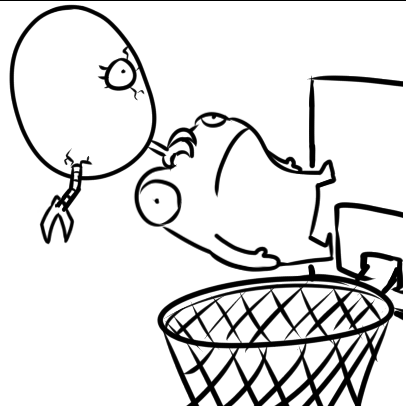 In Living Life as a Monster doesn't Sound that Bad - Another Isekai RP → 19 days ago Forum: Casual Interest Checks
Picture/Description: As a Giant Raven hatchling, Mori wasn't exactly blessed with the instinct of breaking out of her shell. As such, she's an egg with three holes: two for the legs, one for her vision. While this is certainly a defensive boost, an inability to fly makes the utility of being a bird questionable.

Personality: Everything about Mori could be described as loud; her personality, her way of speaking, and her general aesthetic sense. For better or worse, she's a headstrong individual who marches to the beat of her own drum. She's often described as bouncing between two mental states: incredibly amped and incredibly angry.

History: Mori, also known by her full name of Maureen Jackson, was a strange artist. Obsessed with placing her art in hard to reach places, she never reached any amount of commercial success with her works. Turns out, a plan of placing your art where no one can see it only results in a couple of trespassing charges and stern conversations. Her death was unfortunate but wholly expected. She tripped and fell off a building, later succumbing to her injuries.