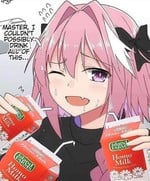 3 mos ago
Current Lookin' for peeps for character-driven 5e adventures: roleplayerguild.com/posts/5…
6 mos ago
That's a good idea. Thanks, Bango.
2 likes
6 mos ago
It's been a bit over a year since Polymorpheus left us, and I'm really missing them right now. I hope you're doing well, wherever you are. Our hearts are still with you, always.
4 likes
6 mos ago
I just realized you cannot un-like things you accidentally like on the status board. This is a dangerous place.
4 likes
6 mos ago
Drugs sound pretty good right about now. Mostly copium.
2 likes

uhhhh, hi there
I am here and I sorta exist so yes this is my ‘bio’ and it will probably be rather brief and suck and be sloppy, just like me.
So, without further ado..

stuff about me
• Most people call me Barti or Bart as well as a few other things since it’s just easier or meaner than the actual thing - I invite you to do so as well.

• I’m a 21-year-old (bday June 20th!) Texan who enjoys thunderstorms and rain far too much, and likes anime, running, metal music, and copious amounts of DRUGS candy, among many other cool things - like DnD and MTG.

• I enjoy group rps as well as 1x1s. For groups I have what I think is a decent array of interests, most of it being profusely weeb-y. I like Fantasystuffs (Modern especially), supernatural themes, pretty much all Japanese stuff - including historically accurate settings - as well as general dark/grim themes, comedic slice of life trash, academy rps, unique plots, etc. etc. As for 1x1s I pretty much do romance, but I can do non-romantic stuff too if you give me something to work with xP
The only genre I find myself not entirely comfortable with is really sci-fi stuff, but, if the plot/idea catches me enough it can hold my interest. Oh, and my writing level is high casual to low advanced.

• I’m a sarcastic, snarky, bipolar-depressed, degenerate garbage can, but generally people seem to like me (I don’t know why in the hot hell you would) - but if you would also like to be my friendo lemme know.
I don’t bite.
Usually owo xd rawr

In Perils of Xepreath - Character-driven Adventures → 3 mos ago Forum: Tabletop Roleplay
Terribly sorry for my slowness, folks, I've been a bit under the weather.
Here's the link to the Discord.

I've noticed we have a couple sheets missing from the CS tab, so at some point I'll try to poke whoever hasn't shown much presence yet.
In ⥑ Ember to Ashes ⥏ Dark Fantasy/Mythology (Interest Check) → 3 mos ago Forum: Casual Interest Checks
Interdasting. I'll have my eye on this, seems fun.
In The Fall of Tenas - A 5e Campaign → 3 mos ago Forum: Tabletop Roleplay
Yo is this dropped already? I see GM hasn't been on for a week.

Edit: Welp, rip. Was nice meeting yall :p
In Perils of Xepreath - Character-driven Adventures → 3 mos ago Forum: Tabletop Roleplay
@Fading Memory I haven't been able to read your post until now, I've been a bit occupied the past few days. I believe there was a misunderstanding in that Sen Rak is not yet at the Tipsy Tumbler, she's at an Inn xP

Let's get this show on the road! ^^
In Perils of Xepreath - Character-driven Adventures → 3 mos ago Forum: Tabletop Roleplay
Introduction
Mentions: Everyone Location:Solyanik - Allyanik
Solyanik. The third capital-city of Allyanik. Situated at a halfway point between the Mallaene Mountains and Barras' bay, and resting nestled just north of Barras' river, Solyanik serves as the most highly-populated stronghold which dare stand against the expanding wickedness which seeps out of the Mallaene Mountains.

The people of Solyanik, whom number roughly fifteen-hundred, are varied, and more importantly, stubborn. With the longest history of any city in Allyanik, its inhabitants are loathe to leave it. Those who visit the town soon come to realize its hardiness even without explanation. The western-most establishments - homes, businesses, and administrative buildings alike - are all laden with scars. Claw marks, gouges, scorch marks, and all matter of wounds mark almost every building from all sides. It is clear that the people of Solyanik do not simply live here - they survive here. Even if barely.

The truth of the matter is, Solyanik's fifteen-hundred people is a shadow of what it once was. And it's only getting worse. And the same can be said for every town that stands in the way of Xepreath's chaotic nature.

The morning was warm, the almost-humid air thick with the scent of morning dew and churned dirt. The dark, worn leather of Sen Rak's boots ground against the bits of soil and gravel that were strewn across the aged cobble of one of Solyanik's main streets. She was one to sleep early and wake earlier, and having done so, decided to take a personal look at the state of the city's defenses by herself - and though she and her squad had done so briefly already the evening before, it was easier to focus when she was alone. Now, her stroll carried her back on her way to the "Toremont Inn", where she had stayed the previous night with her squad: Aren, Lillian, and Tarrot.

The people of Solyanik seemed equally inclined to wake early, as the streets were decently populated at the current hour, which could be assumed to be somewhere around seven o'clock. The town around the Toremont Inn was one of business. A couple general stores, several smiths, a Marshal's stables, and several other manners of shops. There was, notably, little in the way of non-functional establishments. No discernible jewelry shops, and tailors of fine clothing seemed few, in turn.

Of course, this wasn't on Sen Rak's mind. She simply enjoyed experiencing the air outside of what she considered a "stuffy motel". In truth, it was of moderate quality and more than capable of meeting their needs. Those needs being a place to stay just for the previous night. Now, they would see to meeting the squad they'd be joining up with. Through carrier, the meeting place was decided to be a Tavern not too far from the Toremont inn, a tavern called the "Tipsy Tumbler".

Finally, Sen Rak managed to reach the two-story Toremont Inn. She made her way inside, the spring-hinged doors that filled most of the doorway pushing to the side with ease. Her eyes smoothly scanned the lobby-room, searching for her compatriots, if they had even made their way downstairs yet.

It mattered not, though - Sen Rak would be making her way to the main bar regardless, and would haphazardly toss her rump into one of the sturdy stools as she rocked into the counter, then settling into a comfortable position, one of her large arms lain across the bar. The barkeep, a middle-aged human man who was quick to approach her as she sat, seemed entirely unintimidated by her large stature, and addressed her while vigorously scrubbing a large tumbler with an aged rag.

"Welcome back, what can I getcha-"

"Drink." The gruff response came suddenly, but the man seemed unphased as he turned to retrieve some form of alcohol from a shelf nearby. "Strong drink." 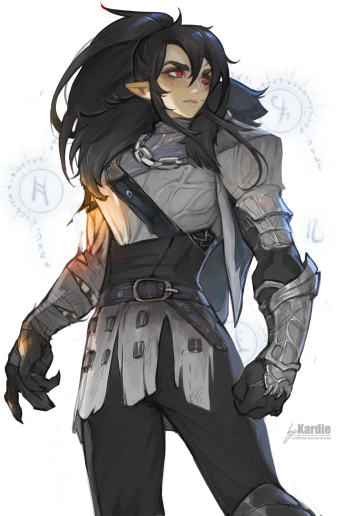 Despite her mother's cautions, Sen was an overly-explorative spirit. She was always itching to go out into the treacherous swamp lands, or wherever she could set her eyes upon, and see what she could face. This led to many encounters with creatures and dangers that a single person would have little hope of overcoming -- but Sen was resourceful. She'd, somehow, always manage to escape - even if battered.

But a adventurous soul was not always for the best. On one of her many fledgling-journeys, she narrowly escaped her pursuer, proud of the skills she had acquired over the years. But escape is not what she did. In truth, she only managed to lead the wicked creature back to her village, where its true strength was realized.

It ravaged the town entirely, and in the chaos, Sen's mother was slain.

Are you planning on making a discord for communication or leaving it all on the forum?

Id leave that up to whether the group wants one or not.
@Fading MemoryNah, Wander's fine.