In Create-A-Hero: A Superhero RPG Season 3- Shattered Dimensions → 10 hrs ago Forum: Advanced Roleplay
Have a few night shifts coming up...

See if I can't get another post rolling.
In Sensation & Wonder: An Absolute Comics Roleplay [DC & Marvel One Universe Style Game] → 16 days ago Forum: Casual Roleplay

It took four days but my insightful message above finally sparked conversation and activity.

You're welcome. I'm a hero.

Marcus Driver rocked back in the passenger seat of the long Dodge, his badge on the dash, street lights from the other side of the road reflecting off his shield intermittently as traffic allowed.

He was back there again. Bickering with Charlie. He'd talked him into chasing down a tip after their close of shift. He's reluctant, wants to get back to Nora, but is unwilling to leave Driver high and dry. Particularly when Marcus said he'd follow it up alone.

The staircase seems darker than he remembers as the pair round each stairwell, as if the walls are stained with the shade of impending doom. The pair fall silent and communicate with gestures and facial tics as they approach the subject's dwelling.

With well-rehearsed precision both detectives pull steel and take up positions on either side of the door. Driver knocks and let's Fate's wheels spin. WhoIsIt? Police. HangOn,I'mNotDressedAndDecentYet. OpenUp. JustLetHimIn. He could swear he could smell not only the pungent smell of accelerant, but the sweet smell of the benzene within it. The state mandated therapist said this was merely survivor's guilt, from the traumatic experience. His story had changed over time to include that point, and it wasn't internally consistent.

It didn't make the odour any less real whenever he thought back on it, though. The mind's a powerful thing.

"Hang on, I'm not dressed yet!" Impossible to delay.

"Open up!" Because it's coming, no matter what.

"Just let him in!" The door's cracked open. Charlie caught a glimpse of it first. The partially obscured nozzle of the flamer. He never flinched, never wavered from the moment. Charlie threw his shoulder into the door to try and quickly open it into the nozzle and knock the weapon clear, but the perp pulled back from the door.

Time froze, before flame engulfed all. Before screaming was everything. 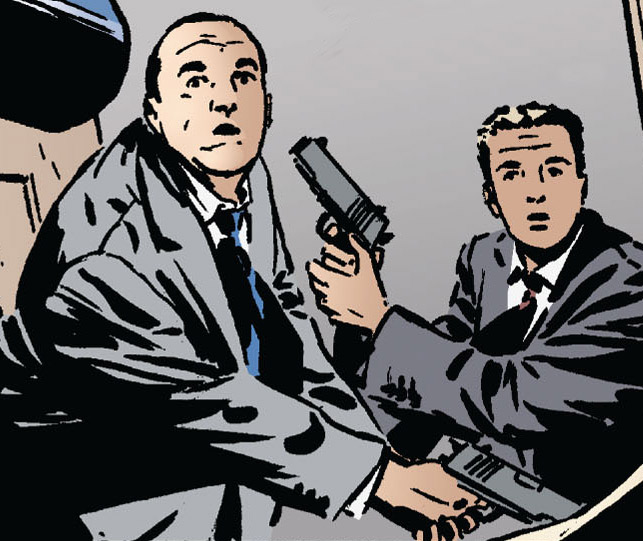 Marcus leant over and unlocked the driver's side door, before reaching forward and pulling the handle to swing the door open. Renee stepped in carrying a tray with two cups of coffee.

"I picked you up coffee."

Driver smiled and held up a big cup from the car's beverage holder. "Don't need any."

"Got a pro stake-out tip from Sarge. Big Gulp. Keeps you fueled for the whole stake out and unlike coffee it doesn't go cold..."

"It goes flat..." They both finished their sentence at the same time.

"Right, so it then just tastes..." Marcus continued.

"...Like Cordial." Montoya finished his sentence again. "Did you get diet?"

"Well, no. That would kind of defeat the purpose. It's the calories that keep you going. Like I said, Sarge Davies told me it's an--"

Driver thought about the size of Sarge Davies' and Harvey Bullock's waistlines. And then sighed out a "Shit..."

He opened the door and poured out the entire contents of his Big Gulp into the gutter, whilst Montoya watched on with a smirk across her face. 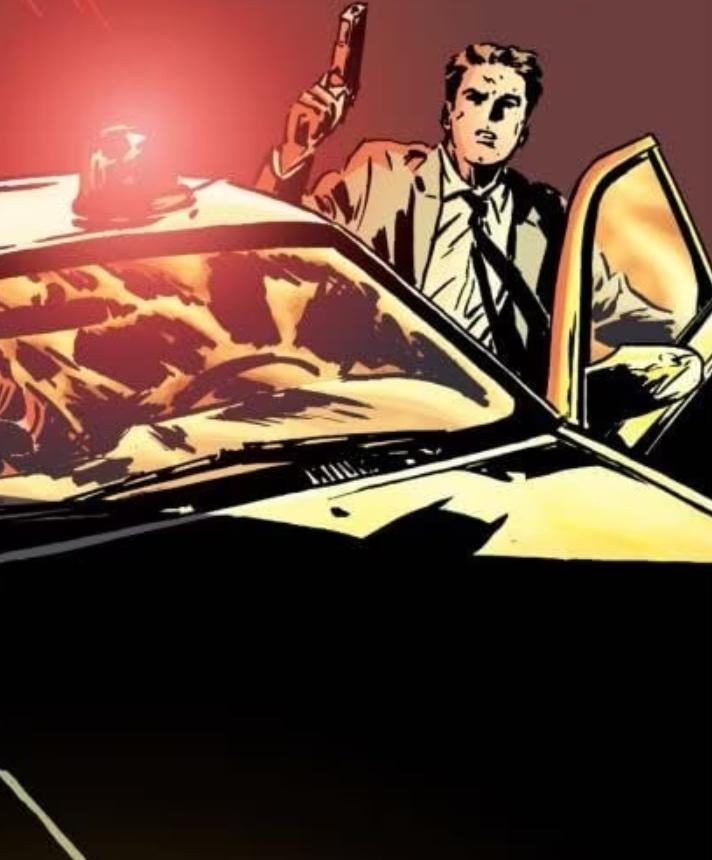 Driver and Montoya sat in contemplative silence. It had been hours now since the start of their shift and the monotony had well and truly taken hold.

Marcus sat low in his seat, his head lolled to one side on an angle. Bored, but his eyes never left the building of interest. Renee’s pose mirrored his own, but she glanced out over the front corner of the window just over the side mirror, and had started to absent-mindedly tap the bottom of the steering wheel.

Driver rolled his eyes over her way.

He glanced down at her fingers.

Driver sighed and leaned back further. Renee turned on the FM radio, desperate for a lifeline to break the tedium.

“—With the appearance of a strange green energy dome having descended upon the people here in Clark County, it seems at this point some bystanders exposed have begun to change form into green rage monsters. And whilst it’s yet to be confirmed, it doesn’t take much speculation to suggest it may be gamma radiation of some kind. And—apologies… Word just coming in. Yes it has been confirmed as Gamma radiation, the initial cause for the birth of the Hulk. One of the most destructive forces on Earth.”

“We’re receiving word now that Colonel Rogers has formed some kind of task force of Avengers who specialise in this type of situation. Given the nature of the circumstances, this reporter would suspect this to include the likes of Hulk, and Los Angeles’ She-Hulk. Whether Colonel Rogers plan to douse out the flames of rage monsters, with a larger rage monster will bear any fruit—”

Marcus grumpily switched off the radio.

“Alright, I’m sorry. How was I to know?” Renee pleaded.

“So it’s not that?” She asked, pointing up to the targeted building which was why they were here.

“No. It’s not that.” He sullenly shook his head with a grimace.

“It’s not that we’re here staking out Amyg-- Aaron Helzinger, and the fact that the last time you came face to face with one of the Bat’s freaks your partner got--.”

Marcus snapped his head around and glared. “Careful…”

“Yeah… it’s not that at all.” Renee concluded, leaving no sarcasm spared.

Aaron Helzinger, nicknamed ‘Amygdala’ by the more creative elements of the Gotham press, had a strange condition which brought on frequent psychotic outbursts. Some quack doctor had tried to ‘cure’ this malady with some backwater off the books, untrained surgery, a plan to remove his amygdala cluster in some ‘creative’ alternative lobotomy attempt.

He missed. Because of course he did. Because this is Gotham goddamn City.

Now Aaron Helzinger was still prone to the same psychotic outbursts, except once they started rolling, they don’t stop. And as the bouts of extreme rage build, he gets stronger. Much stronger. "Warning: Police Do Not Approach" kind of stronger.

The pair were tasked with following up a tip that he'd taken residence in this dirty apartment block in the Bowery. Standard rules applied regarding Helzinger - "Do not approach. Observe and Report. Confirm residence, and leave the rest to Tactical."

Tactical meant Howard Branden, and his jackbooted army of GCPD SWAT thugs. If this was the place, chances are the coroner would be picking Helzinger out of the rubble, if Branden lived up to his usual reputation. That being said, if Aaron Helzinger DID live here, it was probably only a matter of time before the building was turned to rubble regardless. At least Branden might get everybody out before taking action. This time. Maybe.

“Not like I haven’t lost a partner before…” Montoya grumbled, in part to break the silence since Marcus had turned cold.

“It’s not the same.” Marcus murmured.

“I said ‘It’s not the same’. I read up on Allen. He got himself deep into some investigation when someone popped him.”

“This was my door. Charlie got caught knocking on the wrong door and I’m the one who put him there. It’s not the same.”

“Really? Because right now I’m sitting next to a partner who won’t open up and be straight with me and is internalising his shit and the job.” She fired eye daggers at Driver.

Montoya turned back to the building they were surveilling. “Because except for the bullet, I’ve gotta say it feels pretty much the same to me.”

Seconds passed and the atmosphere went thick. Marcus opened his mouth to formulate a reply only to be cut off by a loud shriek coming from the building of interest. Montoya threw the door open and exploded from her seat, triggering a cacophony of horns as she gave little heed to the traffic passing on the driver’s side.

“Montoya, wait! We have to call it in! Montoya! If it’s Helzinger-- Shit!”

He grabbed the radio and started to call in backup.

Renee didn’t hear his protests, she was already sprinting down the street, with her hand over her side piece.

Did she have a death wish? What could make a police confront Amygdala without backup?

Marcus hesitated while calling in support. Should he mention needing SWAT as well as the 11-99 call?

Fuck it. Let them figure it out.

Driver holstered the radio and tore ran after Montoya, watching as she threw open the front door to the apartment block and bolted up the stairs.

It couldn't happen to the same guy twice, surely. Not so damn soon. Even in this city.

Could it..?
In Sensation & Wonder: An Absolute Comics Roleplay [DC & Marvel One Universe Style Game] → 27 days ago Forum: Casual Roleplay
Just got into work... getting everything caught up and then I'll start churning some stuff out.

Champing at the bit, to be honest.
In Sensation & Wonder: An Absolute Comics Roleplay [DC & Marvel One Universe Style Game] → 1 mo ago Forum: Casual Roleplay
If I haven't already done anything by this weekend, expect a solid outpouring then.

Been sick for a bit. About 90% sure it's just the standard cold and sniffles you get when you have a newborn picking up every disease in the vicinity and growing it like an incubator... but I had a Covid-19 test today anyway, since Doctors demand it as a precaution. The likelihood of my getting that here in South Australia is slim to none though...