I am Jb; Briton by birth, roleplayer by my own hand, and lover of literature. I am also an amateur historian, a receiver of a Bachelors degree in Ancient and Medieval History - quite a useless degree, actually - and would like to think that I'm a fair, honest and open guy.

As far as RP'ing goes, I'm pretty open to most things really, all you need to do is ask! :)

So, if you've ever any questions for me, wish to speak about RP's involving myself or run by myself, or simply feel like a chat, don't be afraid to get in touch.

Righto then, if you're interested then can I have a Character Sheet off the lot of you by... let's say... the 10th of January, that's just over a week from now. If you've got any questions etc, then please do feel free to ask! Looking forward to seeing what you can come up with.
In WH40k: Warspite - An Astra Militarum Adventure [Currently Full] → 1 mo ago Forum: Advanced Roleplay
@Skwint, @Jamesyco, you two still about?

This shall probably get going after the festive period, so I wish everyone a merry Christmas and a happy new year until then. :)
In WH40k: Warspite - An Astra Militarum Adventure [Currently Full] → 2 mos ago Forum: Advanced Roleplay
The Crew of Warspite 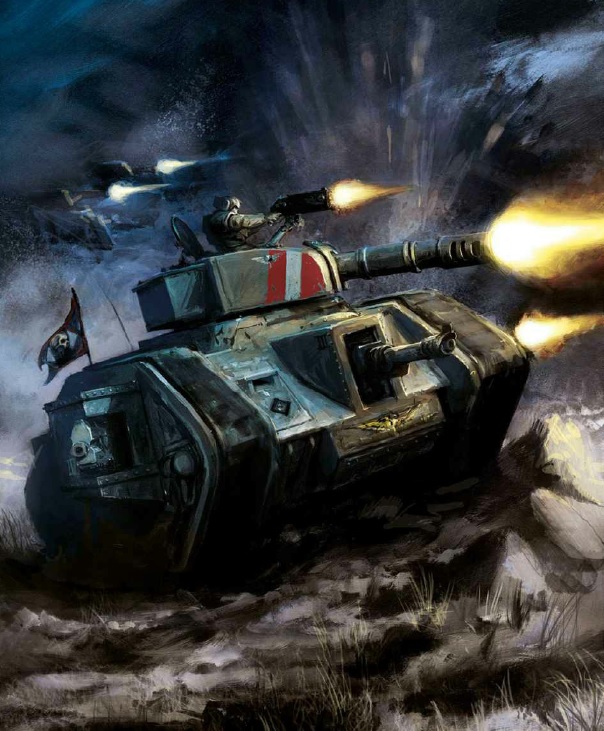 "No one had expected this, or at least no one will now admit to expecting it! For months the Planetary Governor had been trying to his best to weather the after-ripples of the Great Rift, strengthening the PDF regiments and the like... but it was not enough... not enough..." - Last recorded statement of Private Artor Luss, 59th Kiervet Planetary Defence Force (Executed for Heresy)

The Kiervet System is in turmoil, uprisings taking place on three of its four occupied worlds, space-range communications seemingly jammed or at least limited by something or someone, and with only Kiervet Tertius - a civilised Imperial colonia world, used to house Militarum veterans on discharge, grievous injury, or when they are more trouble than they're worth - retaining some sense of order in these darkening and uncertain times; plausibly this is due to the number of former Guard who enlisted in the PDF of Tertius for monetary gain, out of boredom, or to gain some form of reputation among the civilian populous.

Ardeth Mishkol the Fifth, governor-primus of Kiervet Tertius and a former Militarum regimental commander himself, has sent out the call for every able-bodied veteran he can get his hands on.

Although packed to the brim with the poor bloody infantry, there is a distinct lack of armoured might on Tertius and Ardeth knows it, which is why he has specifically asked for those possessing the requisite skills to single themselves out and make themselves known to the relevant authorities at the recruitment office.

Like most in the Imperial Guard you were trained foremost as an infantryman but, through whatever pathway or skills learnt in life, you have held... or wish to hold... yourself to a more vehicular standard.

In one of the vast warehouses on the largest PDF base of 'Castadon Ridge' is a hangar used to house those old machines of war made more-or-less redundant by necessity. Now they are not so. Time to resurrect a giant.

If you've read this far then thank you.

So, what does all that writing mean?

Well in plain English we shall be taking on the roles of former (or recently joined) members of either a Militarum regiment or the local PDF force on Kiervet Tertius, from wherever you like planet wise, and yes I will be accepting Abhumans.

Together we shall form the required crew of the recommissioned battle tank Warspite and take the fight against whatever and wherever we may be required; that means at least four, but up to a maximum of six/seven people (1 Driver, 1 Main Gunner, 1 Loader, 2 Side Gunners for sponsons... and possibly an Enginseer.).

Please submit your character sheets by Private Message to me, myself and I - once accepted you can post them in the Char tab.

Rank: What rank did they hold in their previous regiment?

Former Regiment(s): Canon regiments only, please. (As in culturally, doesn't need to be a lore-specific regiment.)

Personal Demeanour: What kind of person is your character, what are their motivations etc, and how do they interact with others? Also please include any hatreds, grudges, and so on.

Description: A written description of your character's appearance. No pictures. Please include here any armour or clothing as well.

Service Record (History): A sketch of your character's life and history before and during service in the Guard/PDF; feel free to lay it out as a list, a prose-based piece or however you feel. Give me three solid paragraphs (if you choose to go with prose), at least, please.

Equipment and Armament: What do they bring with them/carry on their person? This includes weapons; please note that this will probably be changed during the RP for specific missions and the like.

Miscellaneous: Anything you want to mention but haven't been able to cover yet. Secrets for the GM, particular habits, that sort of thing.

Righto, I'll see about getting this up and running soon.
In WH40k: Warspite - An Astra Militarum Adventure → 2 mos ago Forum: Advanced Interest Checks

Maybe... though it is getting close to the holidays.

Is it just a standard Leman Russ?

Pretty much, although I was also considering a Conqueror or Exterminator.

Right now I'm just seeing if I can get the necessary crew together, if only four people end up being interested (for example) then it will most certainly be a standard Mars Pattern Russ.