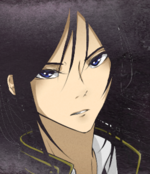 Amelia looked in the direction that the Palpitoad had pointed and after hearing the trainers squabble over what appeared to be a missing Water Stone that the Palpitoad was the owner of. Frowning, she looked between the three before turning back to the Palpitoad. She didn't feel like getting washed away. If she was honest, she had never been swimming before and going for one now did not seem like a good idea. So, she would need to handle this in a way that wouldn't result in her getting washed away. Thinking for a bit, she eventually turned back to Palpitoad.
"Hey, how about we let them present their cases? If none of those three took your Water Stone and it was simply moved, you could be washing it away with all these tidal surges. So, how about we let them come down and give them a fair trial, okay?" She said to upset pokemon in as soothing and calm a tone as she could. "If we find out any of them took it, I'm sure the others will punish them for getting them involved in this situation. So, let's do this calmly and carefully and see if we can't get your Water Stone back."
In Pokémon: Start → 3 mos ago Forum: Casual Roleplay

One of the first things Amelia noticed upon venturing out onto the oh so familiar Route 2 was the large amount of water that seemed to have accumulated there. While it did lend a certain kind of beauty to the route she knew something like this wasn't natural and needed to be looked into. While she loathed the idea of being separated from her partners any longer, she also knew that if she didn't try and figure out what was wrong and try to help, it would weigh down on her. So with that, she began wondering around the Route, hoping to find something.

Thankfully, she didn't have to look far. It wasn't long before she heard the shouts of other trainers and then the cries of a Pokemon. Moving in their direction, she saw three other trainers running away from an oddly shaped blue creature with odd protrusions around it's head. A quick scan with her pokedex told her all she needed to know. A Water and Ground type pokemon was going to be her opponent. While she had Phantump and Pumpkaboo, neither of them knew any Grass-type moves that did actual damage. But she did have that so maybe...

Taking a deep breathe, she pulled out two of her pokeballs and walked towards the Palpitoad. She hoped it would be peaceful if she approached it slowly but she wasn't willing to bet on it. It wasn't a Ghost-type after all, so her special kind of charm wouldn't work here.
In Pokémon: Start → 4 mos ago Forum: Casual Roleplay

Amelia jumped at Kalmia seemed to suddenly materialize next to her, causing her ghostly companions to gather around her, save Honedge who simply watched the see what was going to happen. Amelia remained silent as Kalmia gave her idea, a brief summary of the why and how this might go down, and then ending with what was probably a compliment? Either way, she understood what she had to do and why it had to be done if she wanted the possibility of getting what she currently desired. Rising to her feet, the girl took Kalmia's permit from the Professor while nodding her head.
"Thank you very much Professor. I'll get to work on it right away." She said. She glanced over at the others who were still there but decided against saying good-bye to any of them. Returning her current party of six to their pokeballs, she turned to her companions who would be left behind and managed to give them a smile. When she spoke, she tried to keep her voice steady but there was still a small tremble despite her efforts. "I'm sorry I'll be leaving you all behind again. It hurts a lot you know. But I'll try and make it so we can all journey together, like I promised. Until then, wait here and try to stay out of trouble, okay?"

Also, is this officially dead?
In Chaos in Krioka: The Meandering Monk [Joshua Tamashii] → 7 mos ago Forum: 1x1 Roleplay
@Guardian Angel Haruki so what do you think of Explorers guide to wildemont?
In Pokémon: Start → 7 mos ago Forum: Casual Roleplay

"I didn't expect you to finish it in one night. But since I'm in town, I might as well visit my other partners who agreed to travel with me but are unable to do so because of the limitations on the amount I can carry." Amelia said, as her partners inside of Kalmia's lab came out and joined her. Since she really didn't have any other plans, she turned to face the battle with the two adults, curious about the floating wad of cream that was in ownership of Ellyn. As Yamask, Golett, Driffloon, Phantump, and Pumpkaboo began floating around and even playing with the twins, Amelia, Litwick, Honedge, Spiritomb, and Shuppet all took a seat in the grass to see how the battle would develop and who might become the victor.
In Chaos in Krioka: The Meandering Monk [Joshua Tamashii] → 8 mos ago Forum: 1x1 Roleplay
Boss?
In Pokémon: Start → 8 mos ago Forum: Casual Roleplay

A Ghost/Dragon type did sound very interesting, as did the Galarian variation on the Water/Rock type Corsola. But alas, Amelia knew that if she actually picked up either pokemon, she wouldn't be able to take them with her, as they would be spending all their time with Professor Kalmia. Not that she disliked the Professor or anything, she just preferred to keep her pokemon with her. So, there wasn't really much thought to be put in it once that fact crossed her mind.
"I'm sorry, but at this time, I really can't afford to buy any of the Pokémon you have off of you. I wish I could, for it feels like I just wasted your precious time, but once I am able to do so, I will be back and maybe I'll be able to get more then one Pokémon. Until then, I think this is farewell and thank you for offering the chance to buy one." She said, bowing to the Captain and his crew. With that, she would turn around and leave the docks, heading for the lab.

When she arrived, she was surprised to see a large amount of people there. There was of course the Professor and the twins. But Jacques was also there, surprising Amelia as she didn't expect to run into him again so soon. There were also two faces she didn't recognize. One was a brown-haired boy who was sitting on the ground with a Fennikin and a pretty girl with dark blue hair. Well, she knew two-thirds of the people there, she so approached, her entourage and ghost-types following after her. Arriving at the group, she would raise a hand in greeting.
"Good afternoon everyone. Hello again Mr. Jacques." She said before turning to the boy and the girl. She noted the boy was actually rather close to her age, the closest she had seen anyone be up to this point. She wondered how many more trainers would be joiing this mission and competition between Jacques and Kalmia. Not that she cared for either, she was just happy to no longer be caged. "Am I interrupting anything?"
© 2007-2017
BBCode Cheatsheet