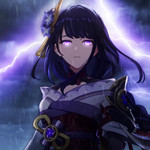 The Raven
"I was wondering when you'd grow tired."

"Your little birdcage. You know, the one built by that other little birdy... damn shame you let a clown beat me to him."

With a small shrug and a callous grin, the red-robed girl seemed to dissipate into a shadow in the shape of a raven before disappearing. Rachel let out a long sigh as she shook her head free of that girl's words. Her eyes drifted shut as she whispered soft words, taking a moment to calm the emotions that had flared in response to that thing's harsh words... and a reminder of the past. It wouldn't be long before she opened her eyes once more, taking a look around the dimly lit station that had been her home for so long. The cement walls were barren and lonely, but that was the life Rachel was forced to live. Anything worse and... well, there were certain luxuries you couldn't afford when you had a roommate in your own head.

Especially when that roommate was a demon that wanted to end the world.

With a light shrug, Rachel scooped up the pair of keys sitting in a little bowl near the safe house's main entrance. Then ensuring to adjust her bangs to cover the red jewel in the center of her forehead, and pulling the red hoodie close around her form, Rachel yanked open the heavy steel door. It was still a long few minutes of walking through dilapidated tunnel after dilapidated tunnel, a saddening standard for this part of Gotham. Reaching an arm out, Rachel danced her fingers along the wall of the tunnel and for the briefest of moments could've sworn she could feel the myriad of emotions of those who had once passed through these very tunnels. The girl yanked her hand back in shock, eyes widening lightly at the new experience. "Noisy, aren't they?" The familiar voice cut in from behind her, yet Rachel refused to even acknowledge the source as she mentally forced Red down.

Within ten minutes, Rachel was free of the labyrinth. She stood at the bottom of the stairs leading up from the abandoned tunnels to the surface, taking the time to collect herself. This part was always the worst, given the proximity of her exit to Arkham. She could feel every thought, every emotion ripping through the shattered minds of the inmates behind those walls. Though the worst, perhaps, were the ones who were coherent in their thoughts. Rachel shuddered at the memories of what she'd felt from those... animals, before shaking her head and lightly slapping her own cheeks. Control. She needed to control herself, she couldn't let their thoughts give Red any more food than she already had. So, with a final smack to her cheeks, Rachel refocused on the task at hand. She ran. Dashing up the stairs, she surged out onto the streets of Gotham like a bat out of hell. Then putting the Asylum to her back, Rachel continued to run down the sidewalk in the crisp air of Gotham's Night.

She didn't stop until the dark whispers, the screams, and the hunger from the Asylum finally left her mind. To say her mind had finally quieted was... a bit of an overstatement. The never-ending cacophony of emotions within Gotham never went away, but at least they stopped screaming in a desperate bloodlust. Rachel slowed to a casual walk, taking the time to turn her attention away from the inside of her mind and towards the world around her. Gotham may not have been the most beautiful of places, but it was certainly better than an abandoned subway station. No matter how homely Jason had made it for her. However, that thought was soon shoved down deep inside her psyche. It was dangerous, any memories of that boy.

The sacrifices we have to make. I can help you embrace those emotions, all you have to do...

Rachel bit back a harsh retort as the voice in her mind trailed off, letting her offer float upon the wind. Rachel knew how that statement, she'd heard it over and over and over again. All she had to do... was give in. To let the beast inside consume her, and invite forth the end of everything else.

No, she wouldn't be giving in.

Rachel slowly refocused herself as she turned automatically down another alleyway, making her way towards the same shelter she'd been frequenting as of late. It was a relatively small shelter, sitting comfortably on the ground floor of a residential building in Bristol, about three blocks away from the Asylum. It was, after all, Taco Night at the shelter. She'd be a damned fool to let her own fears keep her away from Tacos. Red be damned. Still, even as Rachel made her way down alleys and streets she knew entirely too well, she kept a wary eye on the shadows. Knowing that there were any number of threats that could be skulking on her path; Cultists, Lowlifes, or men dressed like bats.

"Our Acolytes are in position, High Father." Came the youthful, energized voice from the shadows surrounding the central chambers. A smaller-framed figure, dressed in a deep crimson robe with his hood up to hide his features stepped quietly into the torchlight. Before him, standing before an altar painted in the mighty glory of their lord, stood the High Father. Dressed in matching robes to the young man reporting, the High Father was substantially larger and his station was marked by the staff her bore. The High Father turned slowly, speaking to the junior member as he did.

"They know their tasks?" He asked, voice booming with confidence and easy command.

"Yes, High Father, the messaging has been prepared and the Acolytes have their roles. The rituals will be brief, but a message will be sent."

"Good." Said the High Father, an ominous tone creeping into his voice as a sickening grin was visible under his features hood. "When she sees the calls, sees the love we have for her..." The man said as he raised his arms above his head as if offering something to a higher being. "Our lost little bird will know the truth. She will come home to us, and take us together into Salvation." The man said, even as the younger of the knelt down.

"Shall I give the order?"

"Yes. She has been away for far too long."
In DC Comics Roleplay: Fall of Justice → 11 days ago Forum: Advanced Roleplay

I have a GM thing I need a couple of guinea pigs volunteers for. If not I'll just have it done as a background thing, but be cool to get some people in on it.


With that sheet out of the way! I did have some ideas as far as her initial plot (if I am accepted of course), that could see her actually start out at odds with the Bat/Batfamily if those of you playing those characters are open to hearing them! Obviously, I can write that off if y'all don't wanna get dragged in ^^!

I hope she works, and I'm happy to make augments as needed to the sheet/character to join in!
© 2007-2017
BBCode Cheatsheet