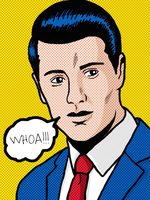 2 yrs ago
Word of the Day: Overcome.
3 likes
3 yrs ago
Also checked out Myriad Reality, I think they are trying to build some kind of computer consciousness over there via IC posts.
3 yrs ago
Get ready for an unusually low volume of likes then, you so-and-so.
3 likes
3 yrs ago
Can someone ironically praise me please? Thank you!
3 likes
3 yrs ago
Stop blowing things out of proportion.
2 likes

In Fallout: Independence → 1 yr ago Forum: Tabletop Roleplay
Ben hadn’t seen folk, or at least decent folk, in many moons, not since he left legion territory and vanished into the wasteland. Disappearing into the dust and the wind on his journey east, where he was met by the rising sun, and radscorpians and bark scorpions and colossal snakes. He’d walked far without seeing a friendly face, just the faces of raiders or the dead. So arriving in Independence was just what he needed. Ben had come across it the night before, seeing the glow of the tower from the distance and approaching cautiously. To his relief it was town, no, a city, and had learned from passing traders (which grew more frequent as he approached) that it was known as independence, and that it was presided over by a woman-emperor by the name of White. Stalking the wastes around the city, Ben found a distant place where he could make camp, approaching cities at night was only asking for trouble. So he settled down for the evening, watching the glow, and the occasional passage of traders arriving and departing.

In the morning Ben crouched by a nearby stream and stripped down, out of his defaced legion armor, which he had stripped of insignia and painted black. He washed himself, using some of his precious bar of soap, having heard that there was a celebration occurring. Ben wished to be presentable, so donned his nicer clothes before making way to the city. As he got to the edge of the city he was stopped by a pair of the city’s legionnaires, who asked him his business in independence.

It some dusty point of ingress the pair of rifle armed guards halted him.

“Who are you?” There were many ways that question could be answered, depending on how it was asked, but Ben did the sensible thing of moving his hands from his sides and away from his weapons.

“My name is Ben, Flag, and I arrived from yonder way to see what the festivities are regarding.” Hen spoke in a very formal and restrained manner, as he was taught when he was young, consciously avoiding Latin. They eyed him suspiciously none the less, before conferring quietly between themselves.

They both looked at him with a peculiar glance, it wasn't every day someone came around speaking like they were from an old book. They talked amongst themselves for a moment before the one with the automatic rifle slung it over his shoulder.

"Just head in, everyone is around the tower celebrating, the sheriff should be there too if you have anything you need to ask." They walked away wiping their hands clean of the curious wastelander. Ben let out a sigh of relief, he didn't want to be known as hailing from the legion, he wasn't sure how people to the East felt about them.
In Fallout: Independence → 1 yr ago Forum: Tabletop Roleplay
Name: Bendix of Flagstaff, or Ben Flag for short.

Hey I’m sorry for the late response! But here is a basic idea of what my character is about, still need to flesh.

Edit: I see now that Pluto Charon has been taken. Oops XD
In You are Cordially Invited...[Closed until zelta 02] → 2 yrs ago Forum: Casual Roleplay
I’m sorry for the general lack of activity, I’ve been spending some time with my family recently and have not had much time to myself. Posting will be slow, but hopefully will come.
In You are Cordially Invited...[Closed until zelta 02] → 2 yrs ago Forum: Casual Roleplay
Mond’s tablet began to ping and chirp as the lift drew them closer to their ship, his eyes darting around at all the other vessels they passed, marveling and judging in equal measure. For Mustafa the choice was signed and sealed, Lucy would be theirs and they likely would not survive to get another if they lost her. So there was no reason to admire the others. He did regardless. Looking down at the tablet that hung in his hand, he was being bombarded with ship information and specifications, systems and data sheets on every aspect. He brought the tablet to his face and gave the information a glance. On the outside he held his poise, on the inside he was being overwhelmed, as information streamed across his vision. He would need a Cake plugin for his tablet, this much was for certain.

In the meantime he fiddled with the settings, running an algorithm to simplify it to something he could more easily and quickly absorb. Before settling in for the night and giving everything an in depth appraisal. Mond returned to the documents to find that they had all been filed away and instead replaced with a simple but efficient read out.

The previous owner of the ship seemed to be a no-nonsense kind of man, this directly went against what he saw as they approached the ship. ‘Sentiment, indeed.’ Mond thought to himself, he would have to get Astrid on inspecting the hull’s integrity rather soon. The ship was built, it seemed, for bearable, long term voyages, upgraded to improve upon its glaring weaknesses. It was fitted with upgraded hygiene facilities (showers), and automated dispensaries which interfaced with the recyclers somehow (vending machines). Mond approved of the first, hygiene was important, and if he had to suffer the same vacuum ‘showers’ he had to use for six years, he would be very upset. The cafe was also a choice which he could appreciate, it seemed like on that long journey it was one of the few things that kept him sane, good food, there were days when the food prep AI went awry and they had to subsist off of the ration powders. Had he needed to do that the whole time, he most likely would have lost his composure.

Vending machines were a strange choice, but the more he thought of it, the more sense it made, they were much more convenient than any recycler, they could be reprogrammed as a reward system, and they could host a whole menagerie of goods. Though the read out did not seem to say what they stocked. He would have to check them individually, as much as he wanted to trust the inventory that was supplied by the party, he wanted to take a look at everything himself. However, there were still the added utilities to take into consideration. An improved radar system, with improved capabilities regarding more detailed scans; as well as added external thrusters for tighter maneuvering in times of finesse and egress.

Mustafa was happy with the added extras, though he was sure there would be room for improvement farther down the line, especially as he scrolled through the other aspects of the ship. He frowned, the AI would need more processors, as much as he knew it wasn’t a person, he felt like with its role it needed more space than it had. Mond looked up from his tablet as the ship approached, tucking it under his arm and picking up his luggage case. As the platform eased to a rusty stop at the door, he reached forwards, touching the door.

“Shall we rename her?”
In You are Cordially Invited...[Closed until zelta 02] → 2 yrs ago Forum: Casual Roleplay
@ScreenAcne