STATUS: "To fear death is to fear the beginning of a new book in a series of many." a qoute from myself 2 yrs ago

2 yrs ago
Current "To fear death is to fear the beginning of a new book in a series of many." a qoute from myself 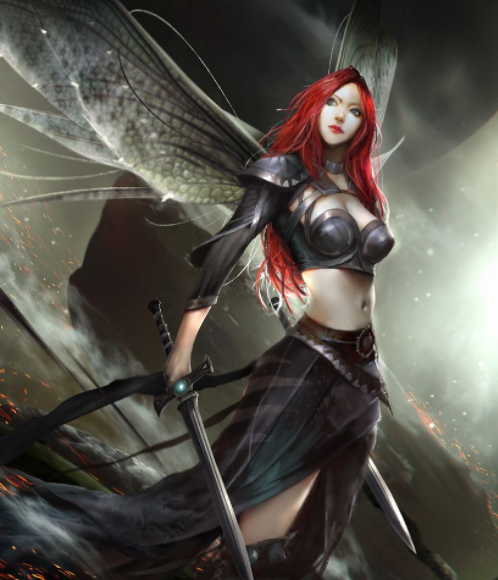 Fears:
⋆ Not being able to see the world suffer
⋆ Dying a peaceful death
⋆ The dark elves losing

Alaia is an introverted person, not particularly interested in being in large groups of people. She acts kind to others, but hides her true cruel self. She is selfish, only going for the things she wants using anyone to get her way. She will be selfless as an act to get closer to others.

She is calm only losing her temper if her targets get away in which she will take her frustration out on random people by torturing and killing them. Alaia is very patient, always waiting for the perfect opportunity to strike. Her bravery can be considered insanity as she will only run from a fight if she cannot continue to heal herself. Alaia doesn’t get anxious often unless she is going to fail killing someone and needs to run. Her reaction speed is great as she’s able to keep up with most fast paced fights or situations.

Alaia is extremely cunning and charismatic; she is able to plan and manipulate people with ease including her adoptive father. She has no sense of humor, only an insane person would laugh at what she would consider funny. She is quite insane taking pleasure in murder, torture, and pain as a sadomasochist. Alaia’s energy levels are quite high especially when she is hunting targets which makes her very hyper and excited.

Current and Past Lover(s):
None

Caelan slowly opened his eyes only to wake up in Avalia still. Hmm I really need to smoke, this is all too much.’ He thought to himself, He glanced at the group around him and smiled when he looked to his left at Sophie. Caelan began to search the pockets of his clothes, finally grabbing the blunt and a lighter he just realized he had the whole time.This makes my life easier. I thought I forgot this.He thought before lighting his blunt and taking a few puffs. “Before anyone says anything I need this.” Caelan said aloud as he laid his head back, relaxing. “So, What were you all talking about?” He asked, continuing to smoke his blunt.
In Avalia → 2 mos ago Forum: Casual Roleplay
Barboda Teff
Time: Dusk
Location: The Ship
Interactions:@Tae Lizzie
Equipment:
Repeating Crossbow
Mithril Plate
Long Sword
Backpack
50 feet of rope
Way finder
Waterskin
Ring (cold resistance)
Rations
First aid kit
Bedroll
Memory glass
Vial of his venom

Barboda nodded when Lizzie thanked him and turned as she addressed everyone. He had one or two nights when those in his bounty hunting guild had tried to have celebrations such as this, but he could never get into them. Tesoro announced he’d only be having water so Barboda added, “I need to keep my head straight as well. I apologize but I cannot intoxicate myself when traveling to such a dangerous area.” He said to Lizzie. ”Tesoro and I will keep watch while you four indulge yourselves. Though, I recommend not going over your limits.”
In Avalia → 2 mos ago Forum: Casual Roleplay
Barboda Teff
Time: Dusk
Location: The Ship - The Gun Deck
Interactions:@Tae Lizzie
Equipment:
Repeating Crossbow
Mithril Plate
Long Sword
Backpack
50 feet of rope
Way finder
Waterskin
Ring (cold resistance)
Rations
First aid kit
Bedroll
Memory glass
Vial of his venom

After he and Helio had explained as much of the world as they could to Lizzie, taking at least an hour to do so, they decided to head to the first and largest island of the dreaded isles, in search of the lost loot of the departed victims. It would also be less likely that light elf ships would take a route that went through that area, as it was highly known to be dangerous. Barboda aided in setting sail and then had been off to the side on his own the last few hours.

He took it upon himself as they neared the dreaded isles to start loading the cannons. He ascended the stairs into the second floor of the ship to load a cannonball in. Barboda repeated this until all the cannons were loaded and brought a barrel of cannonballs into the gun deck. Once he was finished, he walked up the stairs, he turned to look at Lizzie behind the wheel, “The cannons are loaded if anything comes like I said before there are stories of a large creature in these waters, best to be prepared.
In Avalia → 2 mos ago Forum: Casual Roleplay
Trolls 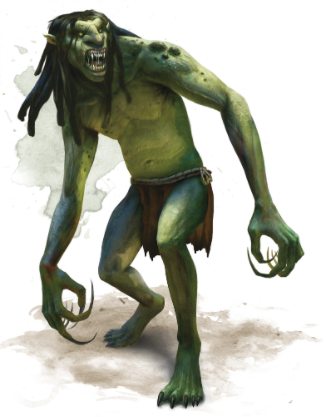 The troll immediately dropped Annya after she imbued her armor with the light, only to look up to some shouting in the trees. It watched as two flaming knives flew at its face one of them going right through its eye. It yelled in pain, stumbling back as it was reaching for the knife in his eye. He yanked it out along with the eyeball still skewered on blade and threw it to the ground. The troll stood there trying to regenerate only to be kicked in the lower area. The force and intense shock of electricity surged through his body until his heart stopped causing it to drop to the ground dead. His body fell back to the ground with a thud and dispersing of dirt into the air.

The other troll continued to pound on the dragonborn only to be lifted of the ground by an intense force of wind; it flew backwards, unable to stop itself, only to slam into a large tree. A thick branch stuck out from the center of it’s chest, impaling it’s heart. The troll stood up, moving his body off the broken branch with a grunt of agony. It clearly assumed it could regenerate as it took a few steps towards the group before it too fell to the ground, still.
In Avalia → 3 mos ago Forum: Casual Roleplay
Caelan Knight
Time: 10 am
Location: Eastern jungle of Sun Elf Kingdom
Interactions: @princess Sophie @baraquiel Jomari @13org Nuallán @Potter Rosaria @chrysocoma Aurora
Equipment: A D&D miniature, a blunt and the clothes he was given

Caelan heard a calm voice in his ear letting him know she was going to protect him. He did not want to glance her way but managed to nod his thanks, catching her kind smile out of the corner of his eye. He forced a smile back. He was pretty terrified and focused on running. He could hear the creature slamming into trees behind them and his heart raced as he ran. He could feel Sophie clutching tightly to him and did not want to know the sight she saw.

Sophie had called out asking him to put her down and he replied hastily,“Uhhh I think it might be worse to risk stopping!” He would have to hesitate in order to drop her, or she would in order to bolt into a run and that would be enough to get snatched up. The loud sound of, buzzing behind him soon reached his ears and Caelan wondered what was going on back there, but did not bother looking back.

A new voice in the distance called, “Go princess, we will distract the creature!”
The sound of crunching and other horrible noises soon followed and Caelan felt a little sick inside.
He did not bother commenting and hoped Sophie had not seen too much. Once they finally got away from the creature, Caelan slowed and leaned his hands on his knees, letting Sophie slide down his back.

Rosaria told them the name of the creature was a Vuothoran, but they were out of its territory and safe. Apparently, Sophie had electrokinesis, which would explain the buzzing noises, but he had not gotten to see much of what had happened and he was disappointed. He listened to Nuallán as he started to talk to him and nodded in agreement. it was really starting to feel like he truly was in a game of Dungeons and Dragons at this point.
In Avalia → 3 mos ago Forum: Casual Roleplay
Barboda Teff
Time: 10am
Location: The ship.
Interactions: @Tae Lizzie @princess Helio
Equipment:
Repeating Crossbow
Mithril Plate
Long Sword
Backpack
50 feet of rope
Way finder
Waterskin
Ring (cold resistance)
Rations
First aid kit
Bedroll
Memory glass
Vial of his venom


Barboda picked up on the woman lying to Helio but made no comment, nodding along with her words as if to confirm them to him. He turned to face Lizzie, telling her in reply, ”Well they were from the light elf army, and if the Kingdom hear no reports back, then they will know something happened, especially to the ones who summoned you.” He was certain that they would be chased and hoped he could make Lizzie understand that as she was not too privy with this world.

The sound of shouting caught his attention for a mere second, but he didn’t really care and Lizzie did not seem to either as she sighed. When she asked them to come to the captains quarters, he nodded silently as his reply, following her immediately.
In Avalia → 3 mos ago Forum: Casual Roleplay
Vuothoran 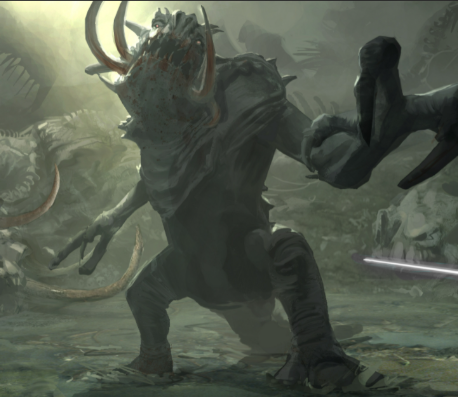 The vuothoran halted in its tracks as lightning went through its body causing the creature to roar and convulse. Its body writhed for a few seconds as it fell to the ground before trying to regain its composure. Moments after three light elves emerged from the jungle surrounding the vuothoran, one spoke up, calling to Rosaria,“Go princess, we will distract the creature!”

The elf was quickly grabbed by the monstrous hand of the creature seconds after speaking; screams echoed in the area from the elf as he was thrown into the maw silencing him forever. The crunch of bones could be heard and blood and chunks of flesh now freely pouring and falling to the ground as it chewed. The other two elves blasted the creature with a barrage of magic hoping the group would continue fleeing.
In Avalia → 3 mos ago Forum: Casual Roleplay
...
In Avalia → 3 mos ago Forum: Casual Roleplay
Trolls

The Troll facing Annya took the multitude of burning slashes to its body, trying to block everything that was slicing him. Hearing her mock him only enraged the troll causing him to become desperate in the need to kill her. The troll then dropped low, swinging its foot under her tripping Annya. It took advantage of this by grabbing her legs, picking her up, and smashing her into the ground. He repeated this action a few more times.

Meanwhile, the troll facing Kharne, stepped back as he was getting slashed by the large sword before running a bit and charging back at full speed tackling and pinning him to the ground, then slamming him with repeated punches to the face.

Annya and Kharne would both be decently damaged by these attacks enough to alarm the humans.
© 2007-2017
BBCode Cheatsheet