STATUS: The doctor is in 5 mos ago 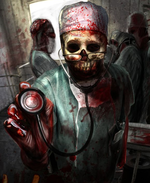 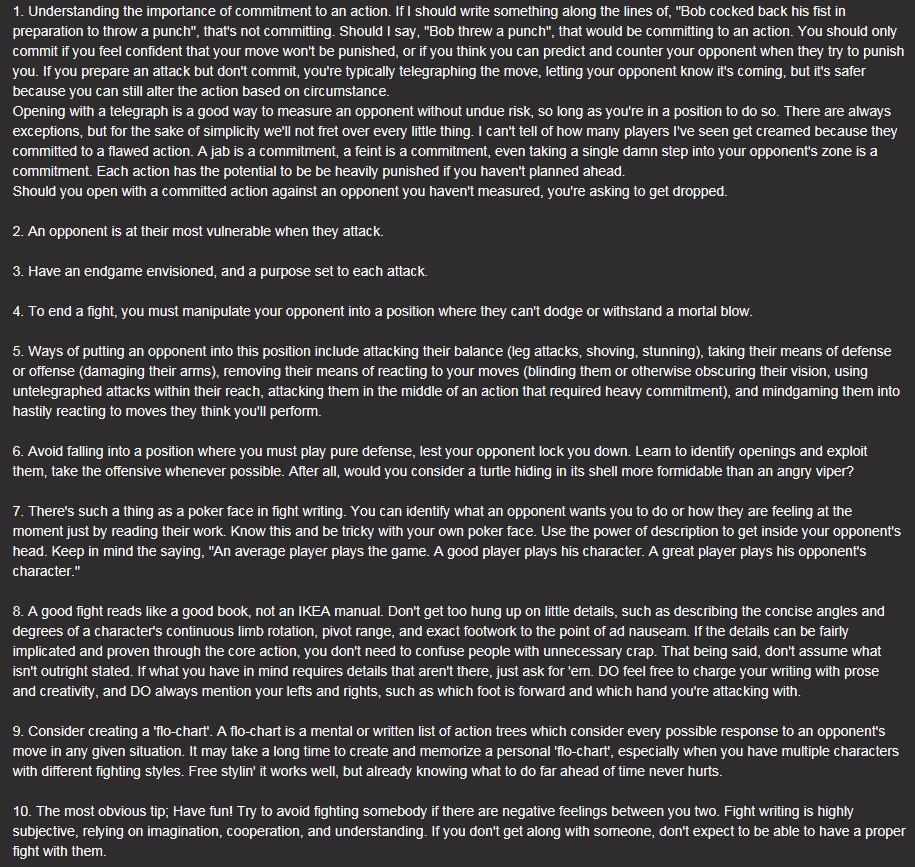 Call me Doc. I'm open to just about every form of roleplay at any time, so if you want to have some fun just toss a P.M my way.

I do prefer RM, URM, or low tier fights, with human hand-to-hand and swords & sandals being the ol' speciality.
Challenge me to a match just any old time!

I've been into fight writing for roughly 14 years, no point in trying to figure out how many total fights that amounts to. I also run a combat centered Discord known as the Combat Workshop. If you want to be friends, just ask! 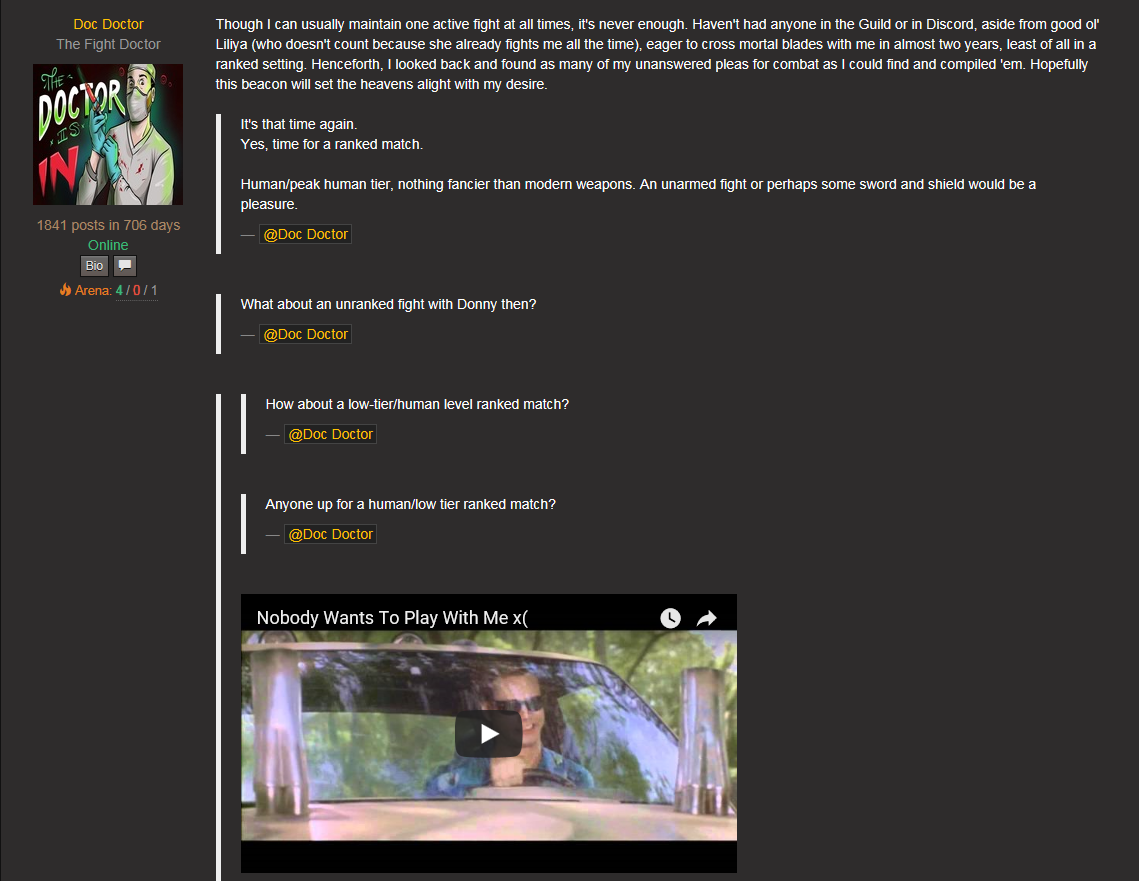 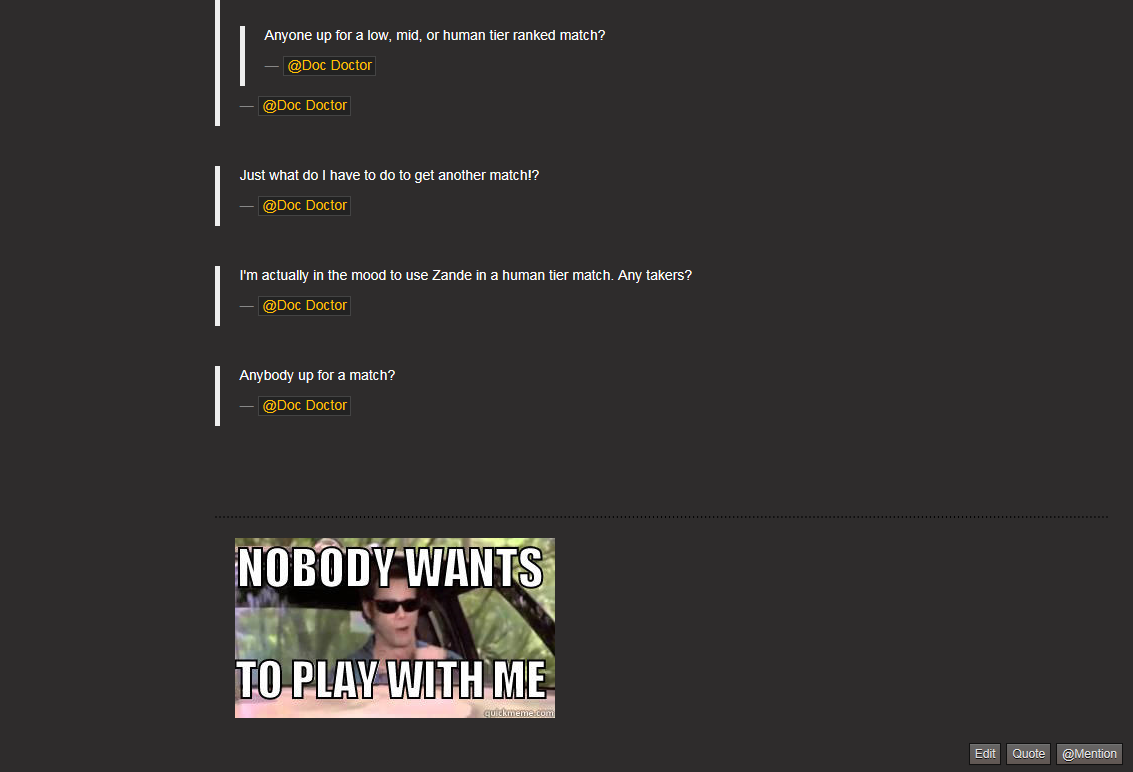 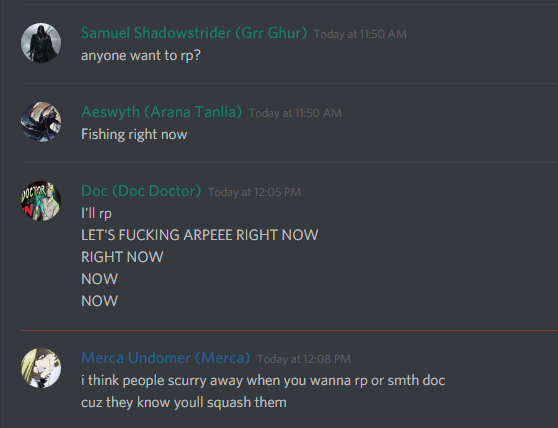 Aw yeah, BrokenPromise is right. One of the things that trips people up the most is the pacing of a fight and commitment to actions. I'll make it short and simple, just in case anyone is unfamiliar.

If my character tried to throw a quick jab, it could be said that's a fairly safe action because it would happen fast and there's not a lot of leeway for my opponent to take advantage of my action.

If my character attempted a quadruple spinning backflip, and would land in a splits position to punch my opponent in the nuts like Johnny Cage, said opponent could easily disrupt me right off the bat, maybe by throwing off the equilibrium of my flip with a simple shove to send me crashing onto my face, thus interrupting my series of actions and rendering everything that would have followed the flip completely nonexistent.
Same if you had your character try and throw out a series of punches and kicks. The more actions you take, the more opportunities you give your opponent to take advantage of.

In short, don't get ahead of yourself if you don't want half of the post you worked hard on to go to waste. The devil's in the details.
In Arena Chat Thread → 1 mo ago Forum: Arena Roleplay
@Blackmist16

Ask for a fight, set up a ranked/unranked thread and specify the rules and setting, you both post your sheets and throw down. If there's an issue that requires a logical judgement, you may contact me to resolve it. After the fight, if it was ranked, contact a moderator and they'll update your score.
In Arena Chat Thread → 1 mo ago Forum: Arena Roleplay
@Galaxyfighter4

There are a ton of variables you'd need to address, but generally you want a character with plenty of strong offensive options and at least a little mindgame potential. If your attacks are predictable or easily punished it'll be hell trying to finish a fight.
In Arena Chat Thread → 1 mo ago Forum: Arena Roleplay
@reaping Adder

I can judge, but I personally can't change any scores. You'll have to talk to a moderator about that!
In Arena Chat Thread → 1 mo ago Forum: Arena Roleplay
@BangoSkank
@reaping Adder

Okay, I can judge for y'all. Been super distracted for awhile, but I'll start checking in daily now. Have you guys decided on a setting?
In Arena Chat Thread → 3 mos ago Forum: Arena Roleplay
@Maglar