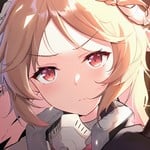 "Thanks for the help," Eins said after being rescued from her predicament by none other than the (in)famous Charlotte. "I thought I was a goner for a second," she added as she patted the dust and ash off her outfit.

"I don't think I'm gonna be that much help in combat training. I just came here to see if anyone needed some tuning to their grimoires. After all, I heard the new blood got into a pretty fierce battle not long ago and I thought I could useful somehow," Eins said, however before she finished her explanation, Charlotte had disappeared into the ether yet again, leaving everyone around in the care of a certain military lunatic and her Serial-Numbers-Filed-Off Danger Room. 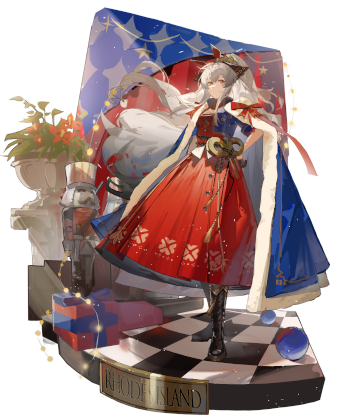 "Oh well, I suppose, stretching my legs every now and then won't break them. Plus, I might be able to see what those new girls are capable of first hand," Eins —or better, Magical Girl Drossel, the one holding the grimoire of the so beloved tale of the Nutcracker and the Mouse King— said in a resigned voice as she followed into the battleground, staying a couple steps behind the newcomers, checking them out with a keen look in her eyes.
In Tower of Fable → 7 days ago Forum: 1x1 Roleplay

"Ahh! This love and this hatred boiling deep within them as they try to fight their fate and everything denying them. It's so tragic and so beautiful at once," Erika declared as she laid eyes on the battle. She better than anyone else could judge and assess Nephuna's actions and their outcome. Only eyes that could see beyond time and entropy could interpret all this data in any meaningful way.

"Why would I want to— Fine, just go on ahead without letting me answer. How very typical of you," Erika said after Katie left her hanging.

Erika's attention was momentarily diverted by someone who seemed to have no concept of respect for others' privacy. All that Akiko would gather from her ability however was endless reflections of herself, the more she tried to peer into the depths of Erika, or her Vassal's, past the more it would feel like she was losing herself in an endless maze of kaleidoscopic colors and shades until the very world, or perhaps her own mind, was broken with the thunderous roar or a million pieces of shattering glass as she was snapped back into reality. If Akiko, or anyone else for that matter, ever cared to look in Erika's direction, they would see the same kaleidoscopic gleam shine into her eyes for but a brief moment, whenever the light reflected into them from the right angle.

"Now then, how about we attack this problem's kernel? Can you decipher it, Esa? I think I know what they are trying to do, but I need to be sure before I try to tamper with this place's foundations."

"I'll... need a bit of time, with all this interference," Esa replied as her eyes darted around the endless stream of code with machine-like speed and precision.

"That should be easy. Just—" Erika began answering but was soon interrupted by a serious voice coming from behind her.

"That won't do. We can't meddle with causality here. There's too much at play," a dark-skinned, silver-haired girl said as she stopped by Erika's side with a grave look in her eyes.

"Ok, fine," Erika sighed as she glanced back at the battle, eyes darting between the many involved parties, especially "Kanbaru" and Thomas, or rather the one following him. "Then we'll wait until the time is right. But if it ever looks like they are actually going to be destroyed for good I'll do it anyway. In the meantime..."

"Hey! Can you fill me in on why everyone is so murder-happy around here? Like, I'm trying my best to not just join them and fight against you all, but I'd like a little context first if you would," Erika asked as she teleported beside Katie right as her cousin was about to pound a Nephuna. "You know we valkyries are a little weak for the whole love and anguish thing, don't you?"
In Grimoiric Heart → 16 days ago Forum: Advanced Roleplay

It's my school now.

Lilian: "Thanks, dear. I was really in dire need of a vacation." Passes on all the paperwork for the newbie before bailing out.
In Grimoiric Heart → 18 days ago Forum: Advanced Roleplay

"Kof... Kof... I don't think that has anything to do with being German. Then again, everyone in my family would do the same so... Kof!" Said a voice coming from the ruined room. "By the way, I might need some help. I'm kinda stuck here," she added in a slightly embarrassed tone.

With the dust settled properly, it became evident that the girl in question was trapped under some of the rubble and perhaps a desk or two. "Why do I even have to be here anyway? You can't expect an artisan to be as good at dealing with these kinds of things as a fighter like you."

Eins was wearing a very tidy and proper uniform along with a lab coat until just about a minute ago when everything got into quite literal flames leaving her in these undignified circumstances. Hopefully, some good-natured soul would come to her aid soon, otherwise it would be quite complicated for a girl with such a weak constitution to get herself free.
In Grimoiric Heart → 22 days ago Forum: Advanced Roleplay
PS:

I'll be posting something soonish as well, I've been sidetracked, but I really have plans to do here.
In Grimoiric Heart → 22 days ago Forum: Advanced Roleplay
@Lewascan2@Ponn, seems like we need the two of you to move things forward. In case you can't post soon-ish, could you at least let us know?
In Tower of Fable → 1 mo ago Forum: 1x1 Roleplay
"How unbecoming of my cousin, don't you think, my dearest Esa?" Said a mysterious blonde girl who landed beside Katie, after leaping from one of the crumbling pillars of the old abyssal ruins, almost as if she manifested from a ripple through time. Her voice sounded unfazed—playful even—despite the world being literally undone before her very eyes as she spoke to a hooded, silver-haired girl standing beside her while watching the fate of Runa and Nephy with intensity.

"I—Is it really right to speak like this when the situation is this bad, Master? I thought we came here because you were worried about Miss Katie," the girl called Esa answered even as she continued to observe the crumbling world, with Katie's "friends" on a side, they on the other, and the grotesque fusion of Runa and Nephy standing somewhat in the middle. Not that any sense of absolute direction could remain in the current state of this floor.

"A little teasing never killed anyone," the blonde answered. Despite her words, she knelt beside Katie and helped the dark-haired girl up, while checking whether or not she was actually hurt or just needed to catch her breath. "Besides, even if I came here to help... I'm also half-Valkyrian. I can't help but be enraptured by the tragic sight of brave warriors who are trying to fight against the shackles of Fate," she added as she turned her gaze to Runa and Nephy.

"Master, please can't we—" Esa tried to plead something, but it was already too late.

"O, brave warriors, Einherjar! If you wish to break the bonds of Fate, let me—Valkyrie Erika Reinhardt—be the judge of thy worth!" Erika was fully committed to her act now.
In Grimoiric Heart → 2 mos ago Forum: Advanced Roleplay
PS:

Also, yes, I may look like a ghost, but I'm still here lurking... waiting.
In Grimoiric Heart → 2 mos ago Forum: Advanced Roleplay

So I know this thing is full but I made a character anyway.

Description: A feisty and wild girl from Bavaria who has been an occasional ally of the Grand Ministry in recent years. She is fiercely independent and prefers to keep her own path, driving the world in her mystical van to collect trinkets, talismans, and most importantly to her, metal junk to smith guns and prosthetics. She proudly immerses herself in punk culture from her homeland and never plays well with authorities. Her and Ozma go way back, and she was one of the first magical girls to work with her. She offers her services to other magical girls these days as a vendor and sometimes helping hand.

History: She was born with hypochrondroplasia or small limbed dwarfism in the 1940s during the Hitler years. At this time it was German Nazi party policy to euthanize the genetically inferior. Her family attempted to plead with the government for her life while she lay in the hospital. During her stay, she’d discover the fable story that’d become her grimoire and restore her limbs with silver metal. Fleeing Germany afterward filled her with a sense of independence, and a demand to travel the world around her instead of the culture that rejected her. With her new magical girl powers, she constantly creates new limbs for herself and has found her trade in her producing, buying, finding, and selling just about any needed item in the magical world.
Grimoire: Das Mädchen ohne Hände (The Girl Without Hands)
Classification: Fable
Description: An old german story over a miller’s daughter who must give up her hands due to her father making a deal with the devil. She finds and falls in love with a King and is given new hands made of silver.
Grimoire’s Power: Incredible powers of creation with her prosthetic hands, able to mend and mold metal in seconds to create devices ranging from guns and artillery to cars and buildings. She is able to heat them up to smelt iron and adjust them into various tools to make herself into a living and breathing foundry. In a pinch, she can turn them into hand cannons and explode her enemies with shrapnel and cannon.
Misc: She is a huge fan of Einstürzende Neubauten, Kraftwerk, and Can.
https://www.youtube.com/watch?v=JWAK9W6o6Qw

I'm surprised she isn't a certain runaway princess to say the truth.
In Grimoiric Heart → 2 mos ago Forum: Advanced Roleplay
The solution of the riddle: