STATUS: Being absolutely done with life. 7 days ago 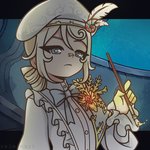 7 days ago
Current Being absolutely done with life.
18 days ago
Wait why??
25 days ago
Hurricane seems to be on it's way to my town, so I might lose power. Just a heads up.
5 likes
27 days ago
Why can't we just vibe to some Gorillaz...?
1 like
1 mo ago
Warning, due to school coming up again, my activity will probably be stagnant.

Standing in an average height, Lilith is a rather pale girl with short, brown hair turning lighter at the tips, and brown eyes. Despite her biker attire, she doesn't really come off as intimidating at first glance. Even with her atheltic build and a few scars here and there. Her clothes usually have cooler tones, and she seldom takes her scarf off.

PSYCHOLOGY
"Wait, you wanna know about me? You're serious?"

PHILOSOPHY ⫻ "Some things are just best left unknown. Would be boring if everyone knew what was all out there in the world, right?"

SECRETS ⫻ Lilith tries to hide the fact that she herself is an apparition. Knowing someone could seal her away if the truth came out.

FEARS ⫻ Death. Lilith doesn't know what would happen to her if she died, or if she can be revived somehow.

QUIRKS ⫻ Tends to chew on her pen, or whatever she uses to write. Also silently gives the middle finger to someone when angry.

FLAWS ⫻ Well, she's mute. Kind of a big drawback if she doesn't have another way to communicate. Then there's also the whole being weaker when there's little to no rebellion left in others, until she fades from existance.

BACKSTORY
"I guess I can trust you enough."

Even if Lilith fibs about her past to avoid being discovered as an apparition, there is some few who she trusts enough to tell her real story. She was created after the Glutton was defeated. An embodiment of the rebellion from those who stood up against the eldrich world-eater. For the most part, she wandered from place to place in the UK like a spirit. Either finding places where the will of rebellion was strong, or avoiding where it's weakest. Lilith never really thought of what kind of purpose she had or life she was supposed to be living. As far as she knows, she just exists.

SKILLS & TALENTS
"Gotta have other ways to talk with people."

Sign Language ⫻ Lilith's secondary form of communication. She usually resorts to it when she doesn't have anything to write with or on.

Multi-Lingual ⫻ What? Just cause she's mute doesn't mean she can't learn another language. Well, Lilith only knows basic ones like Spanish and French, but it proves useful.

ABSTRACTION
"Keep your wits about you."

ABSTRACTION ⫻ Spirit of Rebellion, Lilith apart of her nature as an Apparition has the ability to give herself and objects she blasts the ability to resist outside influences.

ABSTRACTION DESCRIPTION ⫻ Lilith has the ability to project an orb of greyish-blue energy with a sigil inside of it that, if it comes in contact with an object it'll have a special property added to it. She can also apply the effect to herself or anyone she touches and it'll persist long as she's touching the person or wills it. It'll be able to resist external forces that attempt to trespass on it to an extent. For example, if she adds the effect to herself and somebody tried to push her she would only slightly instead of getting flung. If she adds the effect to a crate a telekinetic wouldn't be able to move it. If she added the effect to somebody they could walk through fire with it only giving her minor burns. Think of it like a shield that prevents other people from affecting the object/person shielded as easily as they normally would. This comes with the effect of negating certain abstractions completely as some abstractions can bypass the resistance by nature - such as certain mind control abstractions.

AURA SENSING ⫻ Lilith can sense who and what her abstraction is affecting by the sigil that only she could see marking them.

LIMITS ⫻ The orb itself goes rather slow and can only travel up to twenty meters before it disappears. This means that it'll be hard to support somebody from afar, but she can instantly apply the effect long as she's touching. If she applies the effect over the orb the effect will dissipate after a minute or two but she can keep the effect going on anything she touches long as she has contact. Again it isn't a complete immunity to outside forces only a resistance. A punch won't damage her as much nor will fire, but it'll still cause damage. A telekinetic will have a harder time using their ability on what she's working on but they can still move it. Just not as normal. Lilith can apply the effect on two objects or people (herself counts) at a time and if she tries to apply it to more than two then the oldest one will lose the effect.

WEAKNESSES ⫻ As an Apparition Lilith's power comes entirely from other people's innate rebellion and desire to go against the grain. If there is nothing to resist or rebel against her abstraction will greatly weaken. The more obedient the people are around Lilith the weaker she'll get and eventually she'll fade from existence.

That's not what I heard, I heard that so long as you buy it you'll always have it.

But the fact that there's confusion about this is another reason why it's fucking stupid to have something be a 'limited time release'.

If you buy it you'll always be able to play it even after the six months but sucks for those people who don't buy it in time I guess.

I thought you wont be able to play it after awhile, even if you buy it??
In Video Games: The General Discussion & Community Thread → 16 days ago Forum: Off-Topic Discussion

I don't understand who at Nintendo approves things but whoever decided "We'll release Mario 64, Sunshine, and Galaxy on the Switch but only for six months" needs to be fired immediately.

Er, yeah. I didnt get the shade at first but when I heard it's ALL limited time only? Is it even worth the money if it's gonna dissapear??
In Video Games: The General Discussion & Community Thread → 24 days ago Forum: Off-Topic Discussion
Aight, since I might not be able to solo Ending E in Nier:Automata or get some help without a ps4 acc, I decided to just watch the credits and hhhhh what is this feeling in my heart,,
In Character Files (Transfered or Otherwise) → 25 days ago Forum: Character Sheets

Costume: Jamie's costume appears to be a mix of a combat medic's uniform and a celric's robes, giving them a "battle angel" kind of appearance while keeping their black and white color scheme, with little hints of gold here and there.

Personality: At first glance, Jamie comes off as rather stoic. But that can hide the fact that he can be a selfless and kind person, putting other before him. They tend to avoid any conflict, yet don't tolerate anyone they care for being pushed around. And it's hard to break his calm, laid-back demeanor, even in battle. He'd usually the person to come to when someone needs to calm down, and he tends to hide the fact he's a big nerd.

Though no one really dares to make the healer angry.

Effect: Whether it's an ailment or an injury, Jamie's quirk allows him to heal anyone's wounds with a golden light (think Curaga, but more subtle), given they still has the energy for doing so. A passive quirk like this gives them a bit of a disadvantage, since they've yet to master it even.

Depending on how bad the wound is, theres a chance for it to transfer to Jamie instead. Even if he can heal themself, how long it takes can be slowed, like if they were poisoned for example.

History: Compared to others, Jamie's life has been pretty normal. Well, normal for an orphan. He never knew who his parents were, or where he got his quirk from, but he never dwelled on the thought. They were sort of an outcast for a while, till they grew into a habit of helping anyone injured, or stopping fights before people were hurt. Sadly the latter didn't always work, resulting in Jamie getting hurt himself. He became a sort of caretaker for the other kids, but when did he become interested in becoming a hero?

Admittedly, they were persuaded to try and become one, despite their quirk being more for someone on the sidelines. But for a while, Jamie took up an interest in studying heroes, in a more scientific route. From the damage output of attacks, to the side effects of some quirks. Then the thought crossed his mind. That maybe they did need someone like him out there to help.

So Jamie ended up applying for New Heights the first chance he got. He was surprised when he was accepted, but wasn't sure how he will manage in the exam. So they had an idea, focus on the ribbons, help anyone who got hurt in battle. Not even he expected to make it in, and somehow Jamie got into the bottom ten.

Exam Report: Though avoiding confrontations with any and all robots, Jamie Whyte instead assisted the rest of the students during the exam with his healing quirk. He did get a few ribbons while doing so, but it was a surprising act of kindness, nonetheless.
In Darkest Before the Dawn: A CYOA Magical Girl Roleplay → 25 days ago Forum: Casual Roleplay
In that case Eliza will be breaking one of her silver coins into 4 Bronze, and buying the blade. She's gonna need it.
In Deify → 25 days ago Forum: Spam Forum