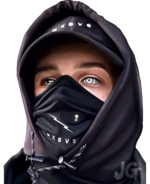 In How do you feel about the level of character diversity you’ve experienced? → 2 mos ago Forum: Roleplaying Discussion
@Raxacoricofallapatorius I tend to play males but generally not around my own age. The problem is, a lot of the time I don't get a chance to play females. Either the RP is already female-sided, or the partner wants me to play a male, or I just happen to feel like playing a male more. Ethnic diversity is.. hard for me, because of the way people often want me to portray certain ethnicities.

"Can you play a black man?"

"No thanks."
In How do you feel about the level of character diversity you’ve experienced? → 2 mos ago Forum: Roleplaying Discussion
I think that as people grow as writers, they grow the diversity in the cast as a general rule of thumb. Unfortunately not always true. It irks me the most in 2 instances: when I am GMing an RP or when I look at faceclaims.

First of all because when I am GMing I'm forced to read all the CS's in depth and review them and the type of RP's I tend to run (Naruto) tends to invite a certain type of people that create certain types of characters. TL;DR all characters are orphans, edgy and introverted to the point of asocial disorders but they're nice deep inside. Yawn.

Second, everyone uses a fucking standard white guy/white girl faceclaim or in terms of digital art, the same 3 pieces of artwork that anyone can find when they type in certain keywords.

How many times have you seen this redhead piece of shit staring back at you with that emotionless face? Fucking exactly.

I'd like to see more ethnic variation, more background variation, and less edgy protagonist backstories.
In ODINS SEARCH FOR WISE TALES, UPDATED TODAY (September 24, 19). → 2 mos ago Forum: 1x1 Interest Checks
Bump.
In Quantity is Not Quality: My Gripes with Advanced. → 2 mos ago Forum: Roleplaying Discussion
Quantity =/= quality is a weak argument in my eyes because;

Let people RP with their friends in peace. Yeah there's guidelines for what should be in each section, but demanding any enforcement is like looking at your neighbour's backyard and telling them they must plant roses rather than tulips when your own garden only has seeds.

I see you are team #fuckHOA too. Good.

I don't really agree with the general theme of OP's post but I also don't agree that there should be no standards whatsoever. We've complained about the names and descriptions of the 3 sections for ages now and I've even suggested a change to them at some point to reflect the 3 sections better at some point but I never got any feedback on it.

The way I saw it and still see it is that rather than advertise 'levels' of roleplaying (which can be elitist, although that is a thing more of the past on RPG and nowadays there is not as much elitism) which makes it seem like 'free' roleplaying is somehow worse than 'advanced' roleplaying, as if being able to splurg 5 pages of word vomit on a post would somehow be better by definition than a one liner.

It should instead focus on levels of dedication and a 'minimum' tag should be created that allows the GM to reflect the minimum level of words in a post; from one liners to '2-3 paragraphs' to '5+' to 'novella length' so that the section titles/descriptions can reflect the level of dedication required for an RP. Free RP would be something like rapid fire one-off short stories, casual would transform into your run of the mill RP where a post every few days is perfect, and advanced would be for those writers who take multiple weeks or longer to cook up a post.

Indirectly you will see many more novella length RP's in the latter section, but at least it seems less arbitrary and contrived.

At the moment I'd almost be inclined to suggest reducing the amount of sections and just doing away with free, casual and advanced and instead make one section; group roleplays. Because as it stands everyone throws their roleplay into casual anyway because you wanna catch a lot of fish and you need to catch a big net for that. Why go fishing in free/advanced where there are far less fish? You don't fish in a lake when you have the Atlantic ocean available to you.
[center][b][color=black]get lost, lose my number, stay gone forever[/color][/b] [/center]
<div style="white-space:pre-wrap;"><div class="bb-center"><span class="bb-b"><font color="black">get lost, lose my number, stay gone forever</font></span></div></div>
© 2007-2017
BBCode Cheatsheet