The flower withers, as I walk by

5 mos ago
Current Ahhh that one time a year I cna update my Bio. From 24 to 25. Getting olddd
5 likes
7 mos ago
Have a merry x mas. Naughty kids, be sure to send your wishlist to satan ;)
1 like
9 mos ago
There is one imposter among us
2 likes
9 mos ago
Another sorry for the delay. A day after I got my heavy machinery licence, I got into a head and tail collision with 11 other cars. I'm alright, but my life got turned upside down in a split second
10 mos ago
To anybody who has an rp with me. I'm sorry. The responses will come. But I'm going for a heavy machinery licence and the lessons are intense and Long,after work houres.
5 likes

Well hello there my name is Ojo and I am a 25 year old dutch girl.

My roleplay range is wide, from vampires to military and fairy's to anime. These are some of my favourite though

I can enjoy a good 1X1 roleplay, but if there is a good group rp with lots of active players I am good to go as well. Further do I prefer to take the female roles but I can play males as well ( note that they tend to be flirty or charming towards interesting female chars)

Little bit about myself:
- I am a Forester and a lumberjack. Though I currently work as a lawnmower (with the big machines to do that XD)
-I collect and wear kimono. KIMONO LOVE,KIMONO LIVE
- I am a fanatic LARP'r who goes on weekends away from time to time with the samurai,elven or healers LARP crew I am a part of. (Love the healer char. I have a roller pin as weapon and it is amazing how fearful that thing can be) - Gotta love anime, you can always strike a concersation with me about that.
- I am a cosplayer, and I love to take pictures of them as well as standing model.
- I am a crazy person, run while you have the chance ;)

A little bit about myself and what I expect in an rp partner before I reveal the exact story line.

I am a 24 Y/o woman from the netherlands. I work fulltime as a gardener and machine operator. When I write rp I tend to write casually, but I can whip up quite a post when needed. It really depends on how much my parter is giving me to write. I like to invest worldbuild together and see just as much creativity come from my partner as from myself. I can create a flurry of npc to make the story more interesting. And this rp. Will have lots and lots and lots of them. Due to smutty content/ graphic horror, I would like for my rp partner to be 18 or above.

So, the story I want to write can start in a few different ways.

First, your character is a miko who one day finds a injured oni. Instead of killing him she heals his wounds. The oni won't forget this gesture and will come back to woo her into becoming his bride.

Second. Your char is a miko with a nasty family curse running in it. Legend says that every firstborn woman will be spirited away by an oni wich your family owns a debt to.

Third, whichever interesting way of making them encounter you can conjure up. Like I said,I like to write together,not alone.

This rp will take place in the current time line, the human world. And kakuriyo,the wold of youkai. It will be filled with quirky youkai, perhaps a yakuza or something ;) LOADS AND LOADS OF KIMONO. probably some evil youkai trying to make the fairytale between our chars shatter, and of course....pesky gods with something stuck up their bum. And cute familiars.

Don't let yourself be scared away if you don't have that much knowledge about Japanese mythology and youkai. Ill help you if you have questions. And #longlivewikipedia am I right? (Yokai.com rules)

Well then,this is my cutie Jun. Whom I have played multiple times,but unfortunately the rp's I have started with him, always ended before we pretty much hit the storyline fully well.

Yoru Jun
Age: unknown
Youkai: Oni
Titles: you will find out IC
Traits: happy go lucky, mysterious,wanderer and a flirt. He is quite the ladies man,and he is very popular with the ladies as well.
Skill: creating Onibi,or demon fire at will. His flames are blue. He can manipulate shadows and dissapear within them. He is also very skilled with a katana, and treasures his sword immensely. His youki is very intimidating as well, but he suppressed it most of the time. Holds His liquor very good and can play the flute.
Weakness: any food with shrimp in them, don't even get started with those. His intrest in humans could be considered a weakness. Onmyojutsu, even he is vulnerable against the exorcism skills of the Seimei clan.
Appearance: 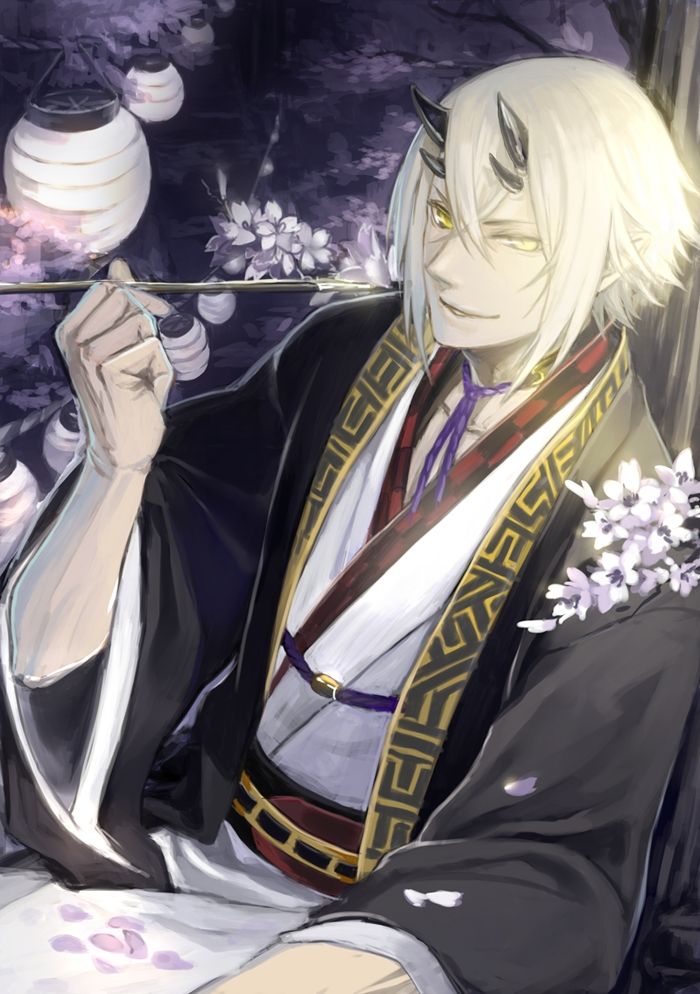 Send me a pm if you want to rp. First come first served <3

My name is Ojo-chan, I'm a 23 year old dutch girl with a deep love for japanese and Chinese history. I wear traditional Kimono and am a active larp chick here in the Netherlands.

My idea goes as the following.

Y/c is a princess from a acient kingdom named Ji Shui ( gathering water) it was named this way because of the many rivers that flowed inside the borders of this mighty kingdom. For generations dragons have accompanied the emperor's of Ji Shui, blessing the kingdom with water. But, something happend a few generations ago and the dragon have decided to return to the heavens,leaving the human world for what it is.

Y/c father was the previous emperor and when he died your brother got enthroned. But that did not last long as brothers began to scheme amongst one another to get the throne for themselfs. In the end, the only living child of the emperor that remained is y/c. Because she is a woman however,she is getting a lot of resistance from the ministers and officials. Of course y/c wants to have the throne your father cherished,and when the prime minister jokingly tells you that you can have the throne if you can find a dragon to support you, y/c inmediatly embarks on a search for a dragon to support her.

Finding said dragon might be a bit more difficult :) so it will be a long journey, if not one she is doomed to hold forever.

So of course she is going to find that Dragon eventually, but she will be meeting m/c before any of that. My char is a young man whom I would love to introduce to you. Hence I am specifically searching from someone who can play the princess in this tale. Please note that even tough this is my idea, I would be delighted if you would worldbuild with me. Create npc, mystical places, and strange beings. This kingdom lies in a magical world with many opportunities to insert lore into.

Whatever else you might want to know:
- Do not ghost me. I would like to hear if you are no longer interested.
-RL happens. So even if you get bussy and cannot post for a (short) while,tell me. I won't bite,this isn't a vampire RP ;)
-please keep it classy. I do not do love at first sight stories, but I like to work towards them all alongside the commen goal of this rp,getting y/c on the throne.
- have fun.
-please post a considerable amount of text. Gimmi candy to work with so I can write a good reply back to you <3
-oc chatting is preferable. I have discord
-did I mention you should have fun already?
- you must be above 18 to rp with me. I will end the rp inmediatly if I find out you aren't above 18. (There is a reason for this rule)

Hope to hear from ya soon my future friend.