STATUS: Good for Health, Bad for Education 1 mo ago 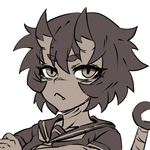 In Ban the Person above you → 1 mo ago Forum: Spam Forum
Banned for not being a fire breathing goose.

In (Starting January 2021) Tales From Landrunia : A Sci-Fi Story of Antics and Badassery → 1 mo ago Forum: Casual Interest Checks

Oh boy! This is gonna be fun.
In (Starting January 2021) Tales From Landrunia : A Sci-Fi Story of Antics and Badassery → 1 mo ago Forum: Casual Interest Checks
I'm a little curious as to the limitations for how off the walls crazy we can get. Are we talking Metal Gear Rising over the top levels of crazy?
In Garuda Wheel → 1 mo ago Forum: Casual Interest Checks
> I'm calling out even the non Fairy Tail fans and those who express their liking.

When they reach the door it automatically slides open, revealing an airlock. After everyone enters the door slams shut behind them, the interior door opening with a soft welcome from the PA system, "New pilots have arrived. Please report immediately to the mess hall." The inside of the base is surprisingly homely, with proper flooring and decorations. Seems these guys can afford to spend a bit on luxury, a welcome change in the military. The walls are white, for the most part, gray at the bottom. This base is certainly odd, but nonetheless it's time to move.

When they enter the cafeteria there's one person clad in a dark blue suit, with pink hair and emerald green eyes. He rests with a relaxed yet firm posture, like he's the boss and he knows it. He looks nothing special, not muscular or visibly strong, yet his hand moves with an almost assassin-like grace, lifting his fork and taking a bite from his mac and cheese. After swallowing he looks over at the new pilots, speaking before they even have a chance to say something. "So you're the people I've been waiting for! Welcome to the snowbirds, grab something to eat and come over here, you've been ferried around quite a bit I can assume, best to eat a proper meal before talking. Hunger makes you angry after all!"
In Critical Shell - A Mecha Roleplay → 11 mos ago Forum: Casual Roleplay

The pilot over in the front smiles, a light chuckle escaping his lips. "We're rounding up on the base, it ain't the prettiest but she works well. I'm going to have to put 'er down on a landing pad a little far away from the main complex, the others are too slippery for this bird with this accursed storm. Go look outside a window or something, main complex is in the middle." The dropship cruises over a hill, revealing the base and all its sprawling components, SAM sites watching the skies for any intruder that dares come close. The base covered layered in white by the snow, a rather uninviting feel within the white hell of Alaska. It used to be calmer before the war broke out, but it's a dangerous bet living here regardless. The dropship circles around the base, switching to VTOL and slowly coming down, gear extending to kiss the ground softly, suspension compressing as the engines power down.

The pilot looks back, eyeing the HELIX pilots one by one. "Not much time for sightseeing, aight? Cold and windy out here, best to get inside sooner rather than later." On the ground a dry red word can be seen inscribed upon the wall of the main complex, 'Snowbirds'. With a sharp eye, the motto 'United we hunt. Divided we strike.' is seen below the name. A somewhat cheesy motto for sure, but it serves the purpose quite well. Next to it, a contrasting black door is spotted, well that shows their way in.

The other complexes close by seem to be warehouses and a communication station, housing the primary ways to reach out for assistance and reports. A large radar system stands upon another building, smaller ones dotted around the entire area. Armed to the teeth, and with the HELIX hangar being seen not too obviously connected to the main base, this place is surprisingly well hidden yet the feeling of fear could certainly be felt. This place is their home now, their new boss having certainly been here a while. Not to get too distracted, however, the pilot moves a hand to a switch on the side. "Opening her up now, get moving before y'all get bit by the cold." The switch is flipped, the rear door opening up, flipping downwards to form a ramp. Now it's their turn to move, their pilot having brought them all this way.
In Critical Shell - A Mecha Roleplay → 11 mos ago Forum: Casual Roleplay
@PhoenixEye9 dw, you can rejoin whenever assuming the roleplay is still alive. Just lmk if you do.
Fuel Rat Defender
<div style="white-space:pre-wrap;">Fuel Rat Defender</div>
© 2007-2017
BBCode Cheatsheet