1 yr ago
Current Finger Nails or Toe Nails???
2 yrs ago
RISING UP TO THE CHALLENGE OF OUR RIVALS!
3 likes

This is my second profile on here, and I have been Play-By-Post RPing for about nine years now. I do my best to see every RP to the end or at least let my character come to his/her own dramatic conclusion when I feel like signing off. Just like novel writing in real life, I tend to find myself on long hiatuses. Since writing is a great way to work out your brain, I try stay engaged as much as possible.

My favorite genres include futuristic worlds, mysteries, and super powers. Any mixture of these three elements will peek my interest.

In Magic is REAL!!! → 1 yr ago Forum: Tabletop Roleplay

"Ma? Is... Is that you?" Her breath hitched in her throat as she began speaking, then, the first tear rolled down her cheek, all the others came flooding out like a tsunami. She knew she didn't look pretty right now, but she couldn't care for her appearance in such a moment. She rubbed her nose with her sleeve to try to stop the snot that was beginning to leak and forced herself to smile at her, this might be the last chance to see her, and Eden most certainly didn't want to leave her the image of a sniveling mess with snot running down her face.

The little old lady smiled, in that way Eden remembered. "Yes, it is me. I'm so happy to see you. Please, have a seat." She pointed at a small pillow on the floor, one of four surrounding a short wooden table. She then had a seat on the pillow opposite of the one she motioned toward.

As if reading Eden's thoughts, she smiled and laughed a little. "I don't need to sit, but you should. We have a lot to talk about. And it would be weird if you were then the only one sitting wouldn't it?"

Over the next hour or so, Eden's grandmother explained this precarious situation. She explained, that after her death, she remained at the shrine, protecting it with what magic she had left. Sure, she couldn't keep it clean or tend to the general maintenance of it, but she could still fend off evil spirits and other malicious forces.

This, of course, begged a different line of questioning. Magic... was real!?!? Sure, when Eden was little, she believed all the stories that her grandmother told her, stories of fairies living in the woods, angels in the skies, and a great deal more. But as Eden grew older, she came to realize this stories for what they were, metaphors and wise tales, meant to teach her valuable life lessons. But seeing her grandmother here now, in all her shining glory, Eden couldn't help but rethink her entire understanding of life. Of course, there was always the possibility that this was only a dream.

"I'm sorry if this comes as an unwelcome shock. You see, I wanted you to have a choice. I wanted you to experience the world outside this place. If you would have decided not to return, I would have understood. But now that you are here, I want to ask you..." Her eyes closed, as if considering whether or not she should speak her next words. Then they opened, and she continued. "Do you truly wish to be a shrine maiden? It is more than keeping a tidy place for people to come worship. It's much more than that, much more magical, but if can also be... much more dangerous."
In The Portal → 1 yr ago Forum: Casual Roleplay

NVM looks like the next few days are busy. -le sigh

That's okay. We can skip the Discord meetup this weekend. We can post slowly over this next week. :)
In The Portal → 1 yr ago Forum: Casual Roleplay
@Aqutanama

Suneli, I would like to wait one more day before I reply again. I want Lord O to have a chance to catch up. Monica White, still needs to find the man that came to her in the hospital.

Ideally, I will be able to reply to both of you in one post tomorrow. I would split it into two parts. You're both very close earning your first magic spells and magic items.

I have all day off work tomorrow (Wednsday). So in any case, I'll be making a post by the end of the day. I just hope that I can do a two birds one stone post.
In The Portal → 1 yr ago Forum: Casual Roleplay
@Aqutanama So, in my latest post, I brought us to two days later, where your character enters an interrogation room with my character. The man sitting across from them is a high level general. I'm thinking that we can do this scene through Discord this weekend. I can do anytime Friday, or I can do Saturday as long as we start by or before 2pm EST time (11am your time).

Also, I'm thinking that Alexandria is not in the interrogation room. They only want to speak with our two main characters right now, as we both seem to be going through the same thing.

If you're itching to make a post between now and our Discord meet-up, you could catch us up to speed with what your characters have been going through these past two days that led them to this military base.
In The Portal → 1 yr ago Forum: Casual Roleplay
Gregory Hamilton
Host Body: Jedrick
A nearby explosion knocked Gregory and the man that was carrying him to the ground. They were out in the open, caught trying to cross an abandoned highway.

"Get up! Get up!" Yelled the second man that was bringing up their rear.

The man who was carrying Gregory scrambled to where Gregory had fallen and leaned down to pick him back up. But Gregory smacked his arms away and rose to his feet. "I can run. You lead, I'll follow."

"You're one tough son of a bitch Jed." The soldier replied from underneath his helmet. It only just then occurred to Gregory that he wasn't hearing either of the two men directly. Their voices were coming through speakers in his own helmet.

Now, with Gregory on his feet, they were able to cover ground much faster. In fact, it was surprising how fast they could run, Gregory himself included. He'd never ran this fast in his life. Nor had he ever seen anyone run this fast. They jumped over craters in the road and made it to the other side of the highway, to the relative safety of the abandoned city's buildings. But they weren't out of the danger zone yet. Occasional gun fire could still be heard. They were still being shot at.

After maybe ten more minutes of running and diving from one cover to the next, the sounds of war were starting to taper off. They had entered the well protected zone of their military base. When they reached the large metal gates, one of the other soldiers did the talking for all three of them. The voice behind the door seemed satisfied with whatever code phrase the man had said, and the doors slid open rapidly. All three of them entered with quick steps, and the door closed just as quickly as it opened.

Over the course of the next few hours, Gregory was taken to a medical building to be examined. When they ordered him to remove his equipment, he had to explain that he didn't know how. So, with the help of the doctor, they managed to manually remove the suit. A nearby mirror provided Gregory with the first sight of his new body. 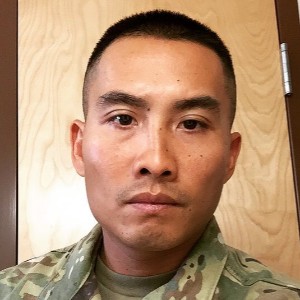 Between the holes in the front and back of his armor, and the fact that he didn't recognize his own name, the doctor was puzzled. Some mysterious forces were definitely at play here. The man known as Jedrick was definitely shot through the chest and killed, and now, some person calling himself Gregory was in his place. Either this, or Jedrick had been brought back to life with a strange kind of amnesia and a fabricated alter ego. In any case, the doctors didn't know what to do...

Two days later, Gregory/Jedrick was still being kept at the base. The men that had led him to safety were obviously more than his comrades, they were his friends. Every chance they got, they tried to help Greg/Jed get his memories back, and to be honest, it was kind of working. The things they were saying did sound familiar, but at the same time, it wasn't as if he himself hadn't been there. He tried explaining to them who he (Gregory) was, but they weren't having it. They were still convinced that their friend Jedrick was still in there, and that this "Gregory" was a made up story.

After the lunch hour, on this day, Greg/Jed was taken to an empty room, similar to an interrogation room. He was led to a wooden chair on one side of a silver, metal desk. There was a man sitting across the table from him, with a cold, dispassionate look on his face. And to Greg/Jed's right there was another empty chair. The man across the table didn't say a word, as he stared into Greg's/Jed's eyes. The two stayed like this for an awkward minute or two before the door opened again.

A man with long hair and tattoos down his exposed arms was escorted through the door by two fully armored soldiers. The man's ankles and wrists were in cuffs. He was then asked to sit in the free chair, next to Greg/Jed.
In Magic is REAL!!! → 1 yr ago Forum: Tabletop Roleplay

YES! I'm so sorry, I wanted to delete it but I'm having trouble figuring out how. I just finished editing it.

Yeah... You can't delete on this site, only edit. Good post thought. Let me think on it for a bit, and I'll have a post within the next 10 hours.
In The Portal → 1 yr ago Forum: Casual Roleplay

I am sorry I am going to pull out. I hve had some family issues and I just can't commit to this wonderful idea. I am sorry I didnt say anything sooner but I spaced on this. If things calm down enough and you will have me I will rejoin.

You're always welcome back Cercess, no worries. Take care of your business. :)
In Magic is REAL!!! → 1 yr ago Forum: Tabletop Roleplay
@Suneli

Did you post that IC post a little prematurely? You're going to edit in more right?
In The Portal → 1 yr ago Forum: Casual Roleplay
@Aqutanama

I'm going to sleep on my next post. I'll have something up by tomorrow. It will be a continuation of my character's situation. I'm thinking it will start with a dramatic run through the battle field, ending up at the military base. There, he will be examined by a medic (and other things that I haven't thought of yet).